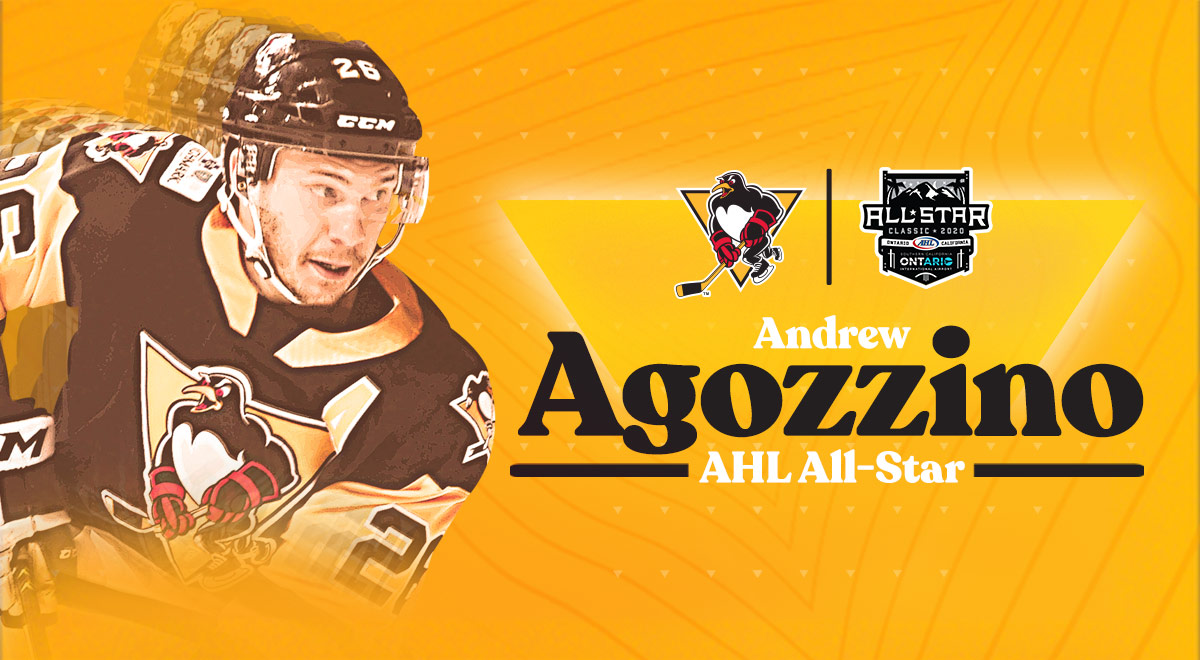 Agozzino will represent Wilkes-Barre/Scranton during the two-day All-Star festivities on Sunday, Jan. 26 and Monday, Jan. 27 in Ontario California. The 2020 AHL All-Star Classic will be the 26th event since it was reintroduced to the league in 1995 and the first time it will be hosted in California. Full rosters for the All-Star Classic were determined by a vote of AHL coaches, and all 31 AHL teams are represented by at least one All-Star. Click here to view the league’s full release and rosters.

Agozzino, who turns 29-years-old today, leads the Penguins with 17 assists and 29 points. His production puts him on pace to eclipse his career high in points, 64, which was set 2014-15 with the Lake Erie Monsters. This marks the Kleinburg, Ontario native’s third All-Star nod, who previously participated in the event in 2013 and 2019.

Agozzino played in his 500th AHL game on Tuesday, scoring a goal for Wilkes-Barre/Scranton in that New Year’s Eve contest. In his 500 career AHL games, Agozzino has amassed 158 goals and 223 assists for 381 points. He has led his team in points at the end of five of his previous seven AHL seasons.

He is one of 48 players selected to AHL All-Star rosters.

Agozzino was signed by the Pittsburgh Penguins as a free agent on July 1, 2019. Prior to signing with Pittsburgh, Agozzino played in 21 NHL games, all of which logged as a member of the Colorado Avalanche. On Feb. 18, 2018, he scored his first NHL goal as part of a two-point outing against the Vegas Golden Knights.

Wilkes-Barre/Scranton’s next game is tonight, Friday, Jan. 3, against the Hershey Bears. The teams’ opener to 2020 also serves as an Eyewitness News Fan Friday with lower bowl tickets available for just $15 and select draught beers on sale for $2 from 6:00 – 7:30 p.m. Puck drop between the Penguins and Bears is scheduled for 7:05 p.m.

Fans can also keep up with the Penguins through the AHL’s brand new high definition streaming service, AHLTV. Subscriptions for AHLTV, which include live and archived games, begin at just $79.99 for the entire 2019-20 regular season. Fans can visit theahl.com/AHLTV now to register for a free AHLTV account and purchase     2019-20 subscriptions.