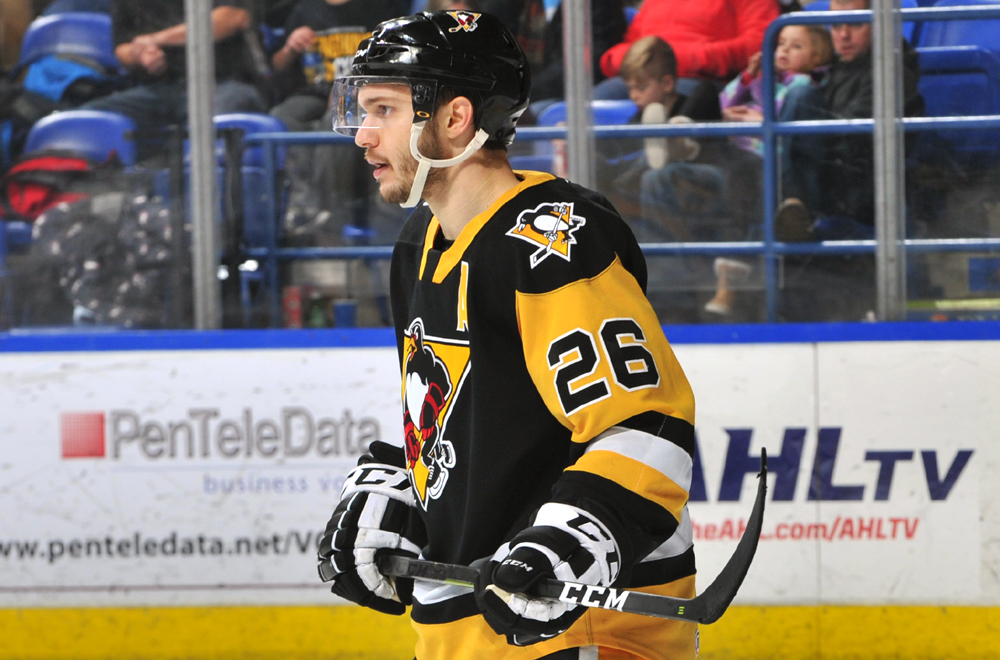 WILKES-BARRE, Pa. – The Wilkes-Barre/Scranton Penguins lost to the Hershey Bears, 6-2, on Friday night at Mohegan Sun Arena at Casey Plaza.

The Penguins jumped on the board first with a goal by Agozzino roughly seven minutes into the game. Agozzino collected the puck off the end boards after an Anthony Angello shot went wide, and the Penguins’ All-Star slipped it to the back of the net.

Hershey responded at 13:51 of the first period when Brian Pinho flipped a backhander past Dustin Tokarski.

The Bears’ offense roared to life early in the second stanza. Garrett Pilon scored 64 seconds into the period, and mere moments later, Eddie Wittchow made it 3-1. At 5:27, Pinho tallied for the second time on the night, prompting Penguins coach Mike Vellucci to switch out Tokarski for Casey DeSmith.

DeSmith was rock solid for Wilkes-Barre/Scranton in relief, but eventually surrendered his first goal of the game on a power-play rebound strike by Philippe Malliet with 1:15 left in the second period.

The Penguins’ showed a spark in the third period, starting on the second shift of the frame. Agozzino’s second goal of the night arrived 56 seconds into the period and slashed the deficit down to 5-2. The Penguins proceeded to out-shoot the Bears, 18-6, in the final frame of regulation, but an empty-netter by Liam O’Brien put the icing on the cake for the visitors.

Vítek Vaněček finished the game with 30 saves for Hershey. Tokarski posted 14 saves on 18 shots faced, and DeSmith recorded had 12 stops on 13 shots.

Wilkes-Barre/Scranton’s next game is tomorrow, Saturday, Jan. 4, against the Springfield Thunderbirds. Puck drop between the Penguins and Thunderbirds is scheduled for 7:05 p.m. at Mohegan Sun Arena at Casey Plaza.