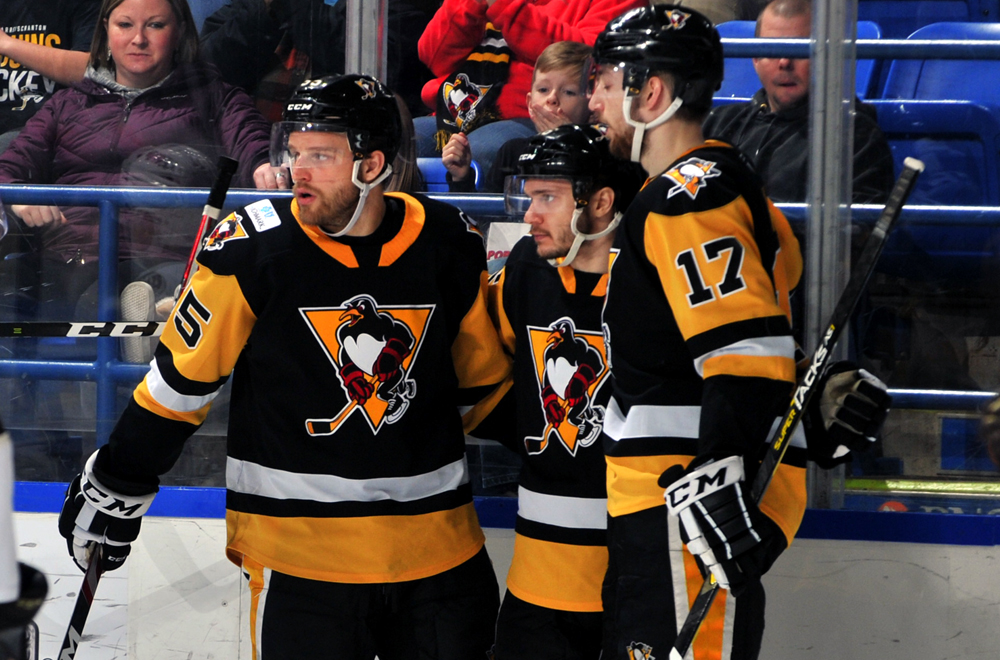 The Penguins (17-14-3-2) play a trio of hot opponents, including first-place Wolf Pack

Tuesday, Dec. 31 – PENGUINS 4 vs. Springfield 5 (SO)
Wilkes-Barre/Scranton and Springfield ended 2019 with a wild, back-and-forth affair that saw six first-period goals and multiple lead changes, but ultimately the Penguins fell in the shootout. Anthony Angello and Jordy Bellerive both had two-assist games.

Friday, Jan. 3 – PENGUINS 2 vs. Hershey 6
On his 29th birthday, Andrew Agozzino scored twice for the Penguins. However, his offense couldn’t match the four-goal second period by Hershey, which led the Bears to victory. Angello notched his second consecutive two-assist game.

Saturday, Jan. 4 – PENGUINS 3 vs. Springfield 6
United on the same line for the first time, Sam Miletic and Adam Johnson unloaded one-goal, one-assist performances. Bellerive tied the game early in the third period, but three goals in 2:24 for Springfield was the Penguins’ undoing.

Wednesday, Jan. 8 – PENGUINS vs. Charlotte
Charlotte comes to Mohegan Sun Arena at Casey Plaza for the second time this season, and it makes its return coming in hot. The Checkers have won seven of their last eight games.

Friday, Jan. 10 – PENGUINS vs. Hershey
One week after facing off in their first games of 2020, the Penguins and Bears go at it again. Wilkes-Barre/Scranton remains the only team to beat Hershey since the start of December, as the Bears have won 13 of their last 14.

Saturday, Jan. 11 – PENGUINS vs. Hartford
Wilkes-Barre/Scranton and Hartford face-off for the first time this season. The Wolf Pack own the Atlantic’s best record (21-8-2-5), but are without their All-Star goalie, Igor Shesterkin. Dating back to 2012, the Pens are 27-7-2-1 against Hartford/CT.

– On Friday, Jan. 3, Andrew Agozzino was named to the 2020 AHL All-Star Classic. This was Agozzino’s third All-Star nod.

– Di Pauli made his NHL debut with Pittsburgh on Jan. 4 at Montréal.