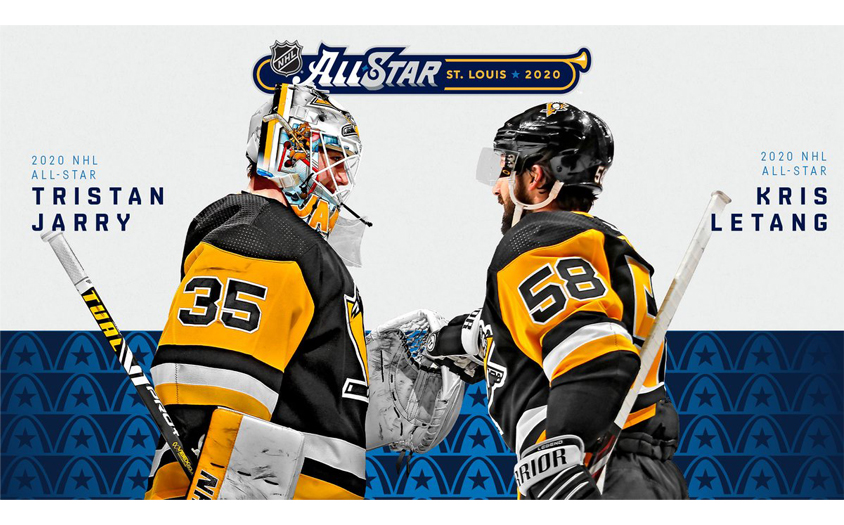 Pittsburgh Penguins goaltender Tristan Jarry and defenseman Kris Letang have been named to the 2020 NHL All-Star Game, representing the Metropolitan Division, it was announced today by the NHL.

Jarry will serve as the replacement for Columbus goaltender Joonas Korpisalo and Letang will replace Penguins forward Jake Guentzel.

This is Jarry’s first career All-Star Game selection. The 24-year old has appeared in 20 games for the Penguins this season, accumulating a record of 13-6-1. Jarry is one win shy of equaling his career-high win total of 14 set in 2017-18.

Jarry leads the league in all major goaltending categories with a 1.99 goals-against average, .935 save percentage and three shutouts (tied). He has allowed two goals or less in 14 of his 20 appearances this year, helping the Penguins rank fifth in the NHL with 113 goals against.

The Pittsburgh goaltender’s three shutouts on the season all came within a four-game span from Dec. 4-12. Jarry set a new franchise shutout streak record at 177:15 minutes between Nov. 29-Dec. 10., including back-to-back shutouts on Dec. 4 against St. Louis (28 saves) and Dec. 6 versus Arizona (33 saves). His third shutout came on Dec. 12 versus Columbus, when he became just the second goaltender in Penguins history to record three shutouts in four appearances (Marc-Andre Fleury; Oct. 25-Nov. 1, 2014).

Letang started his strong season with at least one point in the opening six games (2G-6A-8PTS), a career-long streak to start a season. With 26 points (10G-16A) in 34 games this year, Letang ranks fourth among Metropolitan Division defensemen.

The Penguins defenseman hit the 10-goal plateau for the seventh season of his career, the most double-digit goal campaigns by a defenseman in Penguins history.

Some milestones Letang has reached this season include becoming the first Penguins defenseman to notch 500 career points, tying Coffey for the most power-play goals (40) by a defenseman in Penguins history and climbing into fifth place on the Penguins all-time games played list (781).

Letang appeared in 10 games with Wilkes-Barre/Scranton during the 2007-08 season, posting seven points (1+6) and one shootout goal during that time.  He also appeared in one game with he team during the 2007 Calder Cup Playoffs, picking up an assist.

THOMAS TAKING TIME TO LOOK BACK ON BUSY SEASON