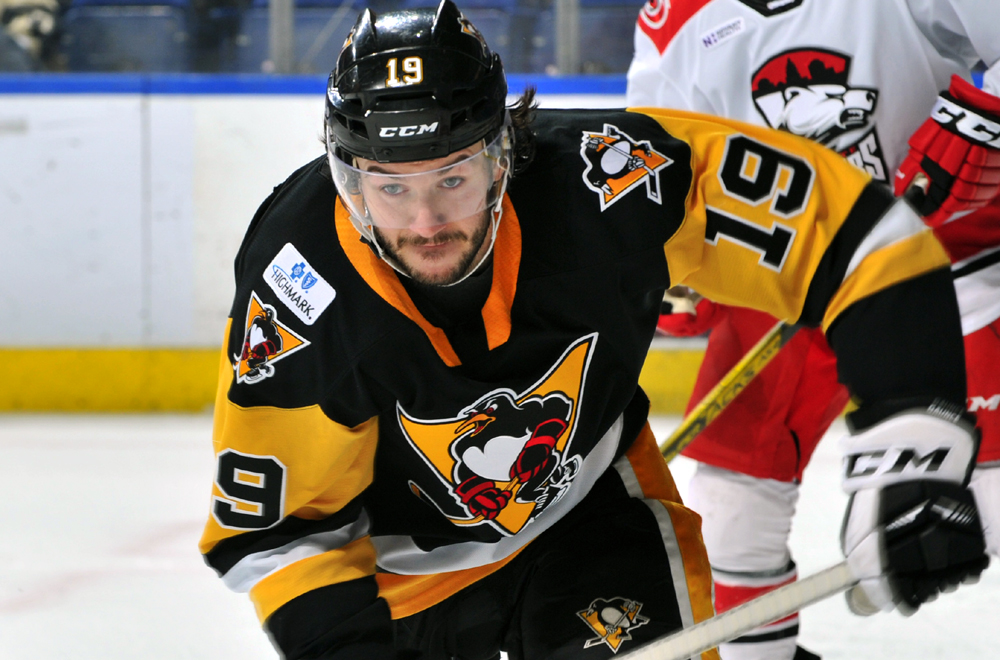 WILKES-BARRE, Pa. – The Wilkes-Barre/Scranton Penguins fell to the Charlotte Checkers, 6-3, on Saturday night at Mohegan Sun Arena at Casey Plaza.

Wilkes-Barre/Scranton (17-15-3-2) scored two power-play goals against the league’s top penalty kill, but it wasn’t enough to match the Checkers’ offense.

Charlotte jumped on the board first less than a minute into the game on a goal by David Gust. The Penguins responded at 14:10 with its first power-play goal of the night. Pierre-Olivier Joseph set-up Cole Cassels for his first goal with Wilkes-Barre/Scranton, and pulled the game even, 1-1.

Clark Bishop buried a second-period, short-handed breakaway to reestablish the Checkers’ lead, but the Penguins answered back with their remaining man-advantage time. A huge shot from David Warsofsky was tipped by Anthony Angello and found the back of the net at 3:28 of the middle frame.

Wilkes-Barre/Scranton took a 3-2 lead near the midway mark of the game as Angello picked off a Checkers breakout and pass and fed Adam Johnson for a snipe in the slot. However, that lead did not last long. Charlotte’s Steven Lorentz scored to tie the game up once again.

The Checkers scored one more time in the second, a man-advantage marker by Morgan Geekie, who threw the puck into a wide open net after Casey DeSmith had been upended amidst a scramble atop his crease. The referee deemed it a good goal, giving Charlotte a 4-3 lead less than four minutes before the intermission.

In the third period, Julien Gauthier tacked on an insurance marker at 8:44, and an empty-netter by Lorentz sealed the 6-3 victory for Charlotte.

Alex Nedeljkovic finished the game with 27 saves for the Checkers, while DeSmith posted 23 saves in the loss for the Penguins.

Wilkes-Barre/Scranton’s next game is Friday, Jan. 10 against the Hershey Bears. Puck drop between the Penguins and Bears is scheduled for 7:05 p.m. at Mohegan Sun Arena at Casey Plaza.