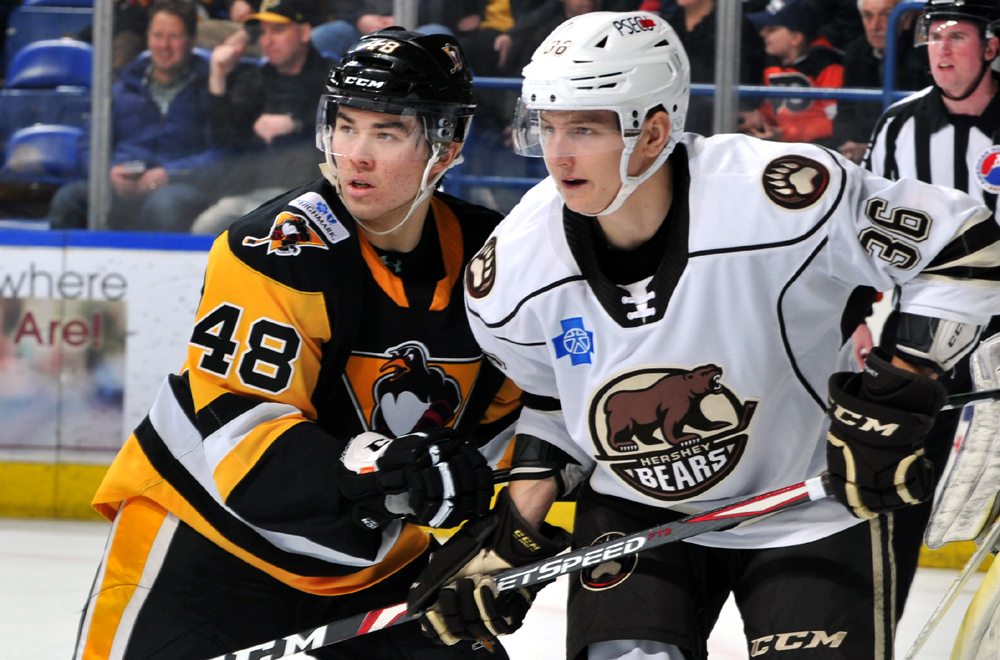 WILKES-BARRE, Pa. – The Wilkes-Barre/Scranton Penguins fell to the Hershey Bears, 2-1, in a shootout on Friday night at Mohegan Sun Arena at Casey Plaza.

Wilkes-Barre/Scranton (17-15-3-3) battled hard and tilted the ice all night, amassing a 30-15 shot differential through regulation. However, none of the Penguins could convert in the shootout, while Hershey’s Shane Gersich scored in the bottom of the sixth round to give the Bears the win.

Though neither team scored in the first period, there was a close call with roughly six minutes left in the frame. Matt Abt ripped a slap shot that slammed off of both posts behind Pheonix Copley, but never fully crossed the goal line.

Hershey hopped on top, 1-0, 42 seconds into the second period with a goal by Axel Jonsson-Fjällby. The Penguins tied it up when Niclas Almari delivered a backhand dish to Jamie Devane for a back-door one-timer at 12:27 of the middle frame.

The Penguins held the Bears to three shots in the third period, but were unable to use their possession time to take the lead. The ensuing overtime provided tons of thrills and plenty of end-to-end action, but not a winner.

In the shootout, Cole Cassels, David Warsofsky, Jordy Bellerive, Kevin Roy, Adam Johnson and Christopher Brown all failed to beat Copley. Dustin Tokarski denied the Bears’ first five shooters, but Gersich found the back of the net and earned Hershey the extra point.

Copely finished the game with 33 saves in regulation and overtime, while Tokarski posted 18 stops while taking the post-regulation loss.

Wilkes-Barre/Scranton’s next game is tomorrow, Saturday, Jan. 11, against the Hartford Wolf Pack at Mohegan Sun Arena at Casey Plaza. Puck drop between the Penguins and Wolf Pack is scheduled for 7:05 p.m.