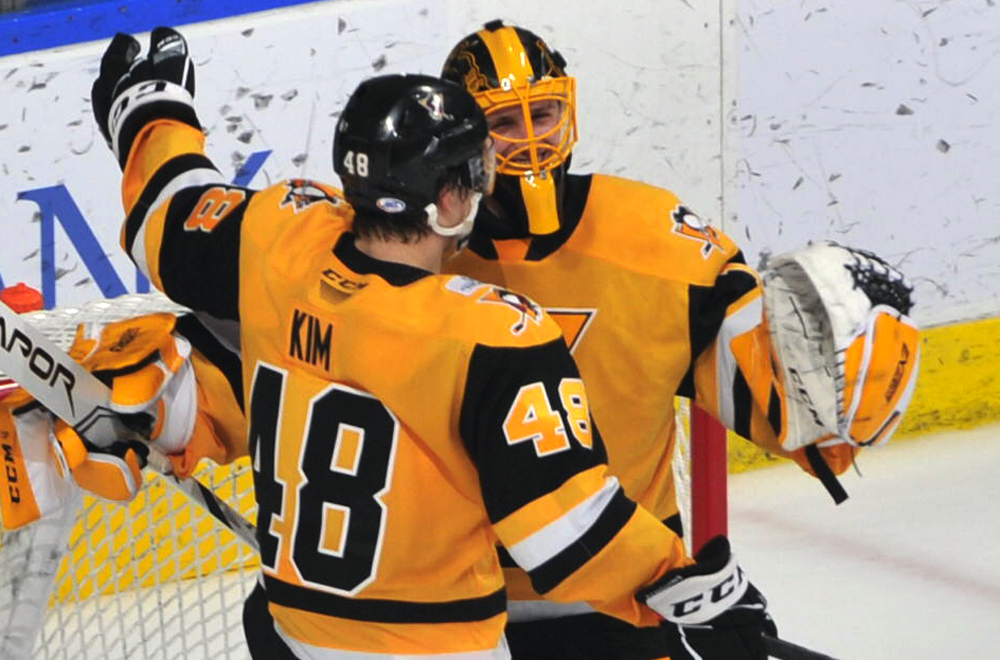 WILKES-BARRE, Pa. – The Wilkes-Barre/Scranton Penguins shut-out the Hartford Wolf Pack with a 3-0 triumph on Saturday night at Mohegan Sun Arena at Casey Plaza.

Wilkes-Barre/Scranton (18-15-3-3) stunted the first-place Wolf Pack’s offense, and Casey DeSmith recorded 25 saves for his third shutout of the season.

It wasn’t until 18:12 of the second frame that Wilkes-Barre/Scranton broke the game’s scoreless drought. Hartford’s attempt to clear the puck from the corner was intercepted by Kevin Roy, and he wristed the loose puck to the back of the net and gave the Penguins a 1-0 lead.

Early in the third period, it looked like Anthony Angello doubled the Penguins’ lead, but a quick whistle by the referee nullified any potential goal.

Hartford started piling up the scoring chances as the third period carried on, but DeSmith turned them aside at every turn. With 1:34 left in the third period, the Wolf Pack pulled goalie Tom McCollum for an extra attacker in a desperate attempt to tie the game. The Penguins seized the puck in the neutral zone, and David Warsofsky ripped a slap shot through traffic and between the posts to put the Penguins up, 2-0. Eventually, Angello tacked on another empty-netter for the Penguins for good measure, his team-leading 15th goal of the season.

Tom McCollum posted 24 saves in the loss for Hartford, his first start of the season.

Wilkes-Barre/Scranton’s next game is Wednesday, Jan. 15 against the Texas Stars at H-E-B Center at Cedar Park. The Penguins’ next home game is Friday, Jan. 31 against the Lehigh Valley Phantoms. Puck drop between the Penguins and Phantoms is scheduled for 7:05 p.m. at Mohegan Sun Arena at Casey Plaza.