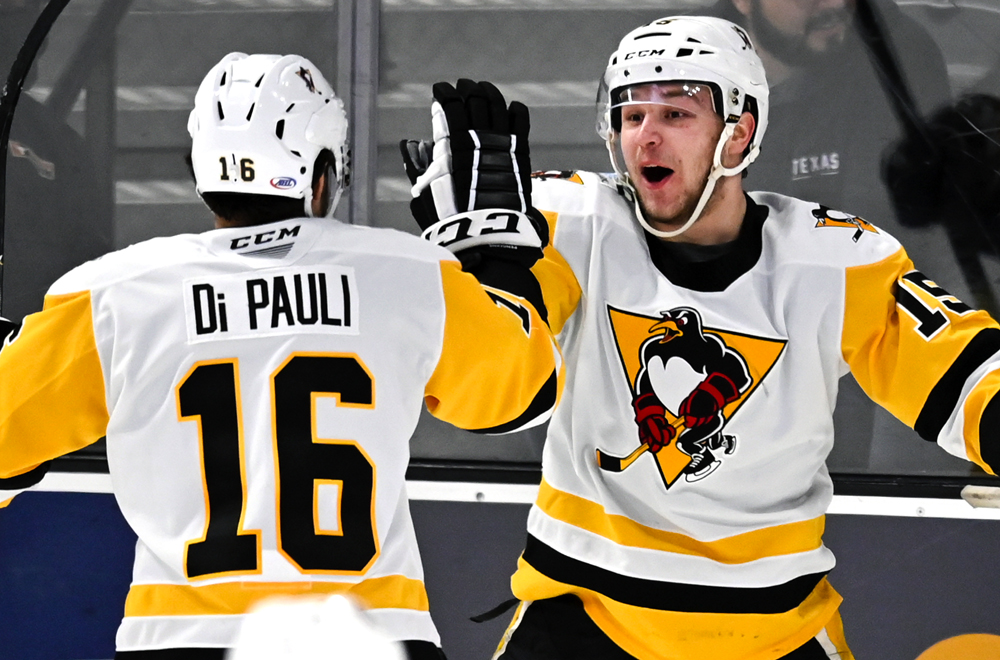 SAN ANTONIO, Texas – Jordy Bellerive came through in the clutch again for the Wilkes-Barre/Scranton Penguins’ 3-2 overtime win against the San Antonio Rampage on Tuesday night at AT&T Center.

Wilkes-Barre/Scranton (20-16-3-4) had already received a two-goal, shootout-winning showing from Bellerive in its last game, and the rookie’s encore was delivering the overtime game-winner with 33 seconds left in the extra session on Tuesday.

Klim Kostin gave the Rampage a 1-0 lead with a tip-in at 8:58 of the first period. Kostin’s goal led to a series of follow-up chances at point-blank range for San Antonio, but Casey DeSmith held firm in net for Wilkes-Barre/Scranton and kept his team’s deficit at one.

The Penguins turned the game on its head in the second period, proceeding to out-shoot the Rampage, 16-4, in the middle frame. After being stymied by Ville Husso on a number of fantastic chances, Anthony Angello finally broke the goose egg with his team-leading 16th goal of the year.

Kevin Roy gave the Penguins their first lead of the night with a redirection on a John Nyberg shot midway through the third period, but San Antonio equalized with an extra attacker to force overtime.

With another game between Wilkes-Barre/Scranton and San Antonio seemingly destined for the shootout, the Rampage turned the puck over at their own blueline late in OT. Thomas Di Pauli shielded the puck across the slot and walked in for a great look, but a loose rebound allowed Bellerive to end the game.

DeSmith logged 23 saves for the win, while Husso turned away 26 shots in defeat.

Wilkes-Barre/Scranton’s six-game road trip continues on Friday, Jan. 24 against the Charlotte Checkers. The Penguins’ next home game is Friday, Jan. 31 against the Lehigh Valley Phantoms. Puck drop between the Penguins and Phantoms is scheduled for 7:05 p.m. at Mohegan Sun Arena at Casey Plaza.