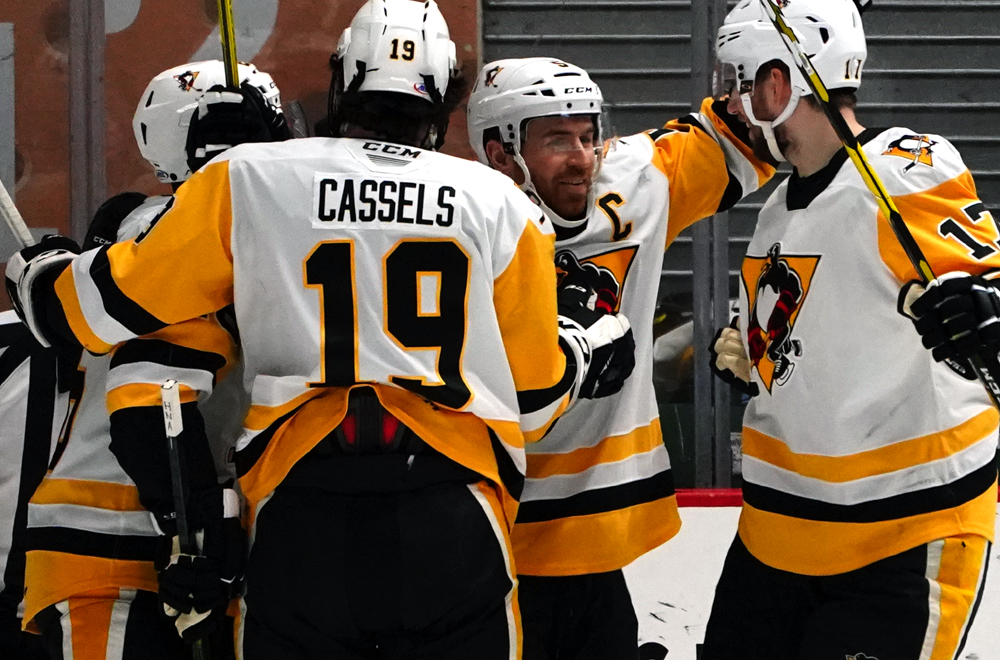 CHARLOTTE, N.C. – Cole Cassels and David Warsofsky led the way for the Wilkes-Barre/Scranton Penguins offense as they defeated the Charlotte Checkers, 5-4, on Friday night at BoJangles’ Coliseum.

Cassels factored in on each of Wilkes-Barre/Scranton’s goals with a career-high five points (2G-3A), while Warsofsky followed suit with a four-point performance (2G-2A). Furthermore, the Penguins (21-16-3-4) tallied three times on the power play against the Checkers’ league-leading penalty kill.

The Penguins took advantage of an early power play to assume a 1-0 lead on a goal by their captain, Warsofsky. That lead doubled to 2-0 after a stellar sequence sprung Cassels and Adam Johnson on an odd-man rush. Casey DeSmith denied Steven Lorentz on a breakaway, and his save led to Johnson and Cassels speeding the other direction. Johnson slid the puck across the crease to Cassels for the finish at 8:45 of the first period. With the assist on Cassels’ goal, Johnson earned his 100th point in the AHL.

Warsofsky scored his second goal of the night at 7:30 of the second period, but Charlotte roared to life shortly thereafter. Julien Gauthier and Eetu Luostarinen tallied 84 seconds apart to pull the Checkers within one, and Gustav Forsling made it 3-3 at 15:10 of the middle frame.

With less than two minutes left in the second Warsofsky delivered a pinpoint pass to the tape of Cassels for a breakaway, and Cassels converted on his solo stampede to the net, re-establishing the Penguins’ lead with a power-play goal.

Cassels fifth point and Warsofsky’s fourth came just eight seconds into the third period. Cassels won the opening faceoff for Warsofsky, who raced into the offensive zone and set up Sam Lafferty for another man-advantage marker.

Charlotte converted on another power play midway through the third period to make things interesting, but DeSmith ultimately thwarted 19 of the 20 shots he faced in the final frame of regulation to secure Wilkes-Barre/Scranton the victory.

DeSmith finished the night having made 36 saves for the black and gold, while Anton Forsberg made 31 stops in defeat.

Wilkes-Barre/Scranton’s six-game road trip concludes tomorrow, Jan. 25, in a rematch with the Charlotte Checkers. The Penguins’ next home game is Friday, Jan. 31 against the Lehigh Valley Phantoms. Puck drop between the Penguins and Phantoms is scheduled for 7:05 p.m. at Mohegan Sun Arena at Casey Plaza.