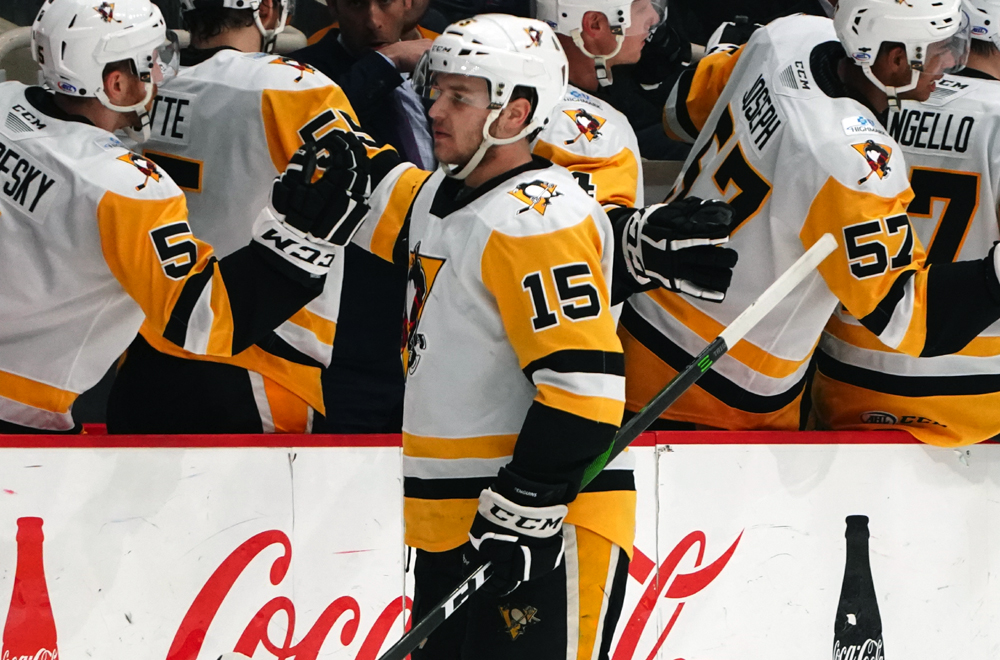 CHARLOTTE, N.C. – The Wilkes-Barre/Scranton Penguins came up with a 4-2 win over the Charlotte Checkers on Saturday night at BoJangles’ Coliseum.

Wilkes-Barre/Scranton (22-16-3-4) received two goals from both Jordy Bellerive and Thomas Di Pauli, including one that gave the team a lead with 1:27 left in regulation.

Charlotte got on the board early, scoring 55 seconds into the contest. Eetu Luostarinen fed Julien Gauthier on a two-on-one rush, and Gauthier hurled the puck past a lunging Emil Larmi.

With Penguins coach Mike Vellucci looking for a way to spark some offense, he started shuffling his lines early in the second period. That tinkering quickly paid dividends, as a new-look line of Bellerive, Joseph Blandisi and Kevin Roy delivered two tallies for Wilkes-Barre/Scranton. Bellerive tipped in a pass at the Checkers’ net-front to tie the game at 12:42 of the middle frame, and three minutes later, Bellerive buried a one-timer that put the Penguins up, 2-1.

Charlotte formulated a swift response to Bellerive’s two goals, evening things up 40 seconds later with a strike by Morgan Geekie.

Larmi fended off a series of fantastic, third-period scoring chances for the Checkers with even better saves, holding the home side at bay until Di Pauli sealed the win for Wilkes-Barre/Scranton. Di Pauli sped past a Charlotte defender, walked in all alone against Alex Nedeljkovic and slipped a backhand shot through the goalie’s five-hole. Di Pauli’s strike came with 1:27 left in regulation, and then he further secured victory for the Penguins thanks to an empty netter with 14.5 seconds left.

Larmi conjured 23 saves in the win for Wilkes-Barre/Scranton, while Nedeljkovic made 27 stops in the loss.

Next up for Wilkes-Barre/Scranton is the 2020 AHL All-Star Break, but the team’s first game out of the break is Friday, Jan. 31 against the Lehigh Valley Phantoms. Puck drop between the Penguins and Phantoms is scheduled for 7:05 p.m. at Mohegan Sun Arena at Casey Plaza.