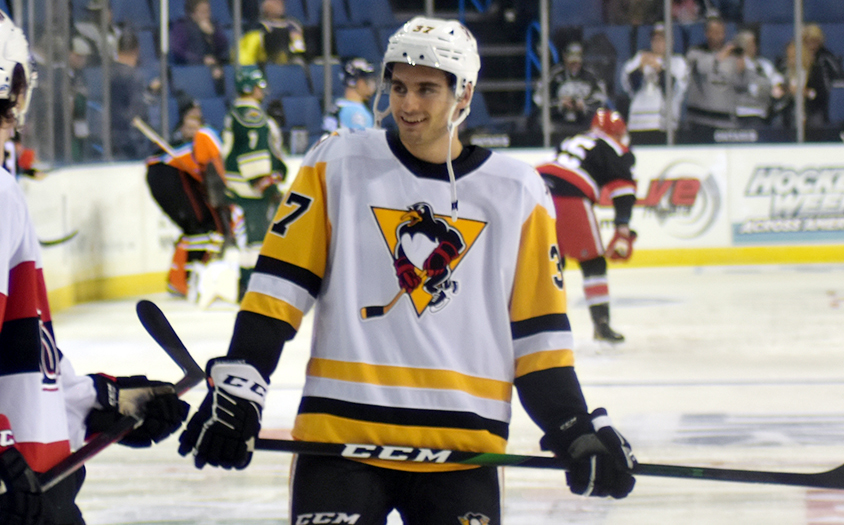 Sam Miletic hasn’t seen his apartment in Wilkes-Barre for nearly two weeks. The Penguins forward had been on a southern swing with his teammates that started on January 13, saw stops in Austin and San Antonio, and wrapped up Saturday night in Charlotte.

But while his Pens teammates were flying back to NEPA on Sunday morning, Miletic was boarding a flight for the west coast to take part in the AHL All-Star Classic, presented yb the Ontario International Airport.

“Obviously it’s really exciting…some more warm weather too out here in Cali is always nice,” said Miletic, who was named as a replacement to the Atlantic Division squad earlier this week. “It’s an honor to represent Wilkes-Barre and it’s a lot of fun to be here.”

Even though he wasn’t originally a selection to the mid-season event, he was certainly more than deserving. The second-year pro ranks second on the Penguins with 27 points thus far this season, and he’s just eight points behind the total from his rookie year.

Miletic competed in the Rapid Fire, Pass and Score and Breakaway Relay contests at the Skills Competition on Sunday, and snuck a shot five hole on Rockford netminder Kevin Lankinen in the final event.

But the on ice action was just one of the reasons that Miletic was happy to be on hand in Ontario. The former London Knight forward was reunited with a pair of former teammates at the All-Star event.

“I didn’t really know anyone coming at first, and then (Bakersfield Condor forward) Evan Bouchard was announced at the same time that I was, and then (Belleville Senators defenseman) Alex Formenton a couple of days later. I’m really close with both of them, I see them all the time in the summer. It was really great to see them again.”

Bouchard brought the crowd to its feet with a 104 mile per hour slapper in the hardest shot contest, which was only bested by Ontario Reign forward Martin Frk’s record-breaking 109 mph effort.

“I benefitted from a lot of those, just passing it up to him, he’d score a lot of times,” Miletic said of his time skating with Bouchard in the junior ranks.

Another exciting part of the weekend for Miletic is the chance to get to know some of his opponents on a different level.

“I think another cool part is you always play against these guys, you play against Lehigh and Hershey 12 times a year. It’s kind of good to meet some of their guys too,” he said. “It’s a great group of guys here and a lot of fun.”