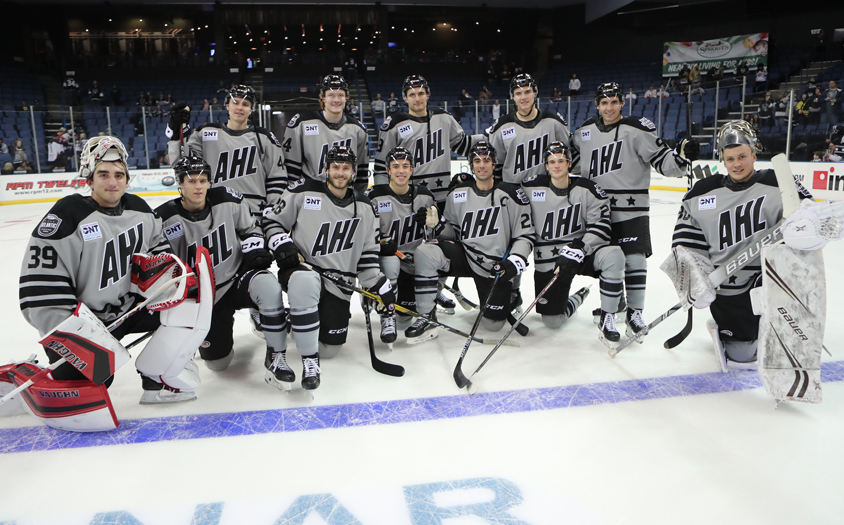 Wouldn’t you know it, that the first AHL All-Star Challenge to be played on the west coast would go to the team that traveled the furthest to participate?

The Atlantic Division squad took home the honors in Ontario, California on Monday night, posting a 3-1 victory over the Central Division in the league’s mid-season event.

The champs dropped their first game in round robin action, 3-1, to the Central, before reeling off wins over the Pacific (3-2) and North (5-2) Divisions, en route to capturing the 2020 title.

Hershey Bears goaltender Vitek Vanecek was named the tournament MVP after allowing just two goals while appearing in each contest.

Wilkes-Barre/Scranton Penguins forward Sam Miletic put on a strong showing as well, registering three points (1+2), including the game-winning goal against netminder Anthony Stolarz in the team’s victory over the Pacific.

“I did the same in the shootout yesterday (in the Skills Competition), the same move…I had a lot of time, not a lot of backchecking,” he chuckled. “I thought, ‘It worked yesterday, why not today?’. And sure enough, it went in.”

While Miletic had a relatively unimpeded chance on his goal, he did note that the pace and effort in the games picked up as the tournament headed toward a finish.

“It’s a competitive game. Everyone’s competitive and wants to win,” he said. “It kind of picks up, that’s more or less expected. Even if you’re playing pond hockey or out in some summer men’s league, it starts slow and always ramps up. That’s kind of par for the course.”

Miletic spent much of the game skating alongside Hershey Bears forward and All-Star captain Matt Moulson, who recently played in his 1,000th pro contest. The second-year pro was impressed with how his nemesis-turned-teammate carried himself throughout the event.

“He’s just a first class guy all around. It was great to get to meet him and know him. It was really cool to be around him. You can tell why he’s been so successful, why he’s so well-liked around the league….Just hats off to him.”

The All-Star Classic capped off a two-week odyssey for the Penguins forward, which saw him leave NEPA back on January 13 with his teammates for four games in Texas, followed by a pair in Charlotte. He’s looking forward to getting back to familiar surroundings.