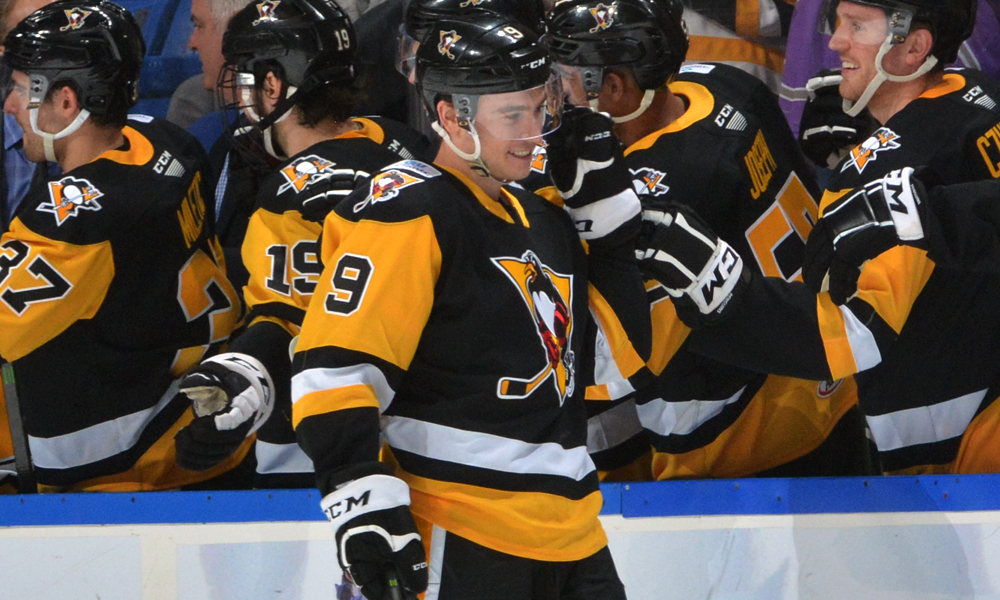 WILKES-BARRE, Pa. – The Wilkes-Barre/Scranton Penguins came out of the All-Star break flying and defeated the Lehigh Valley Phantoms, 4-1, on Friday night at Mohegan Sun Arena at Casey Plaza.

Wilkes-Barre/Scranton (23-16-3-4) received a breakout performance from Jake Lucchini, who managed two goals as the team won its fifth game in a row.

The Penguins kicked off the scoring quickly, tallying twice in 46 seconds. First, Lucchini sped through the neutral zone and slipped a snapshot through the underarm of Jean-François Bérubé for the first strike of the night. Lucchini’s goal was quickly followed by Jan Drozg banking a shot off Bérubé’s back and in at 7:20 of the opening frame.

The two teams went on to exchange unsuccessful first-period power plays, and shortly after wrapping up a penalty kill, Andy Andreoff scored on a breakaway to bring Lehigh Valley within one.

Lucchini notched his second of the game and reestablished the Penguins’ two-goal lead at 7:34 of the second stanza. David Warsofsky split between two Phantoms forwards at the blue line and delivered a perfect pass to Lucchini’s wheelhouse for a one-time blast.

Sam Lafferty, playing in his first home game of the season, gave Wilkes-Barre/Scranton all the insurance it needed by scoring on a highlight reel dash to the net 53 seconds into the third period.

Casey DeSmith made 29 saves in the win for the Penguins. Felix Sandström denied all seven shots he faced after coming in to replace Bérubé, who recorded 23 saves on 27 shots faced.

Wilkes-Barre/Scranton’s next game is tomorrow, Saturday, Feb. 1, against the Bridgeport Sound Tigers. Saturday’s game is also another installment in the Penguins’ Postgame Concert Series, with No Quarter taking the stage after the Penguins wrap things up with their Atlantic Division opponent from Connecticut. Puck drop between the Penguins and Sound Tigers is scheduled for 7:05 p.m. at Mohegan Sun Arena at Casey Plaza.