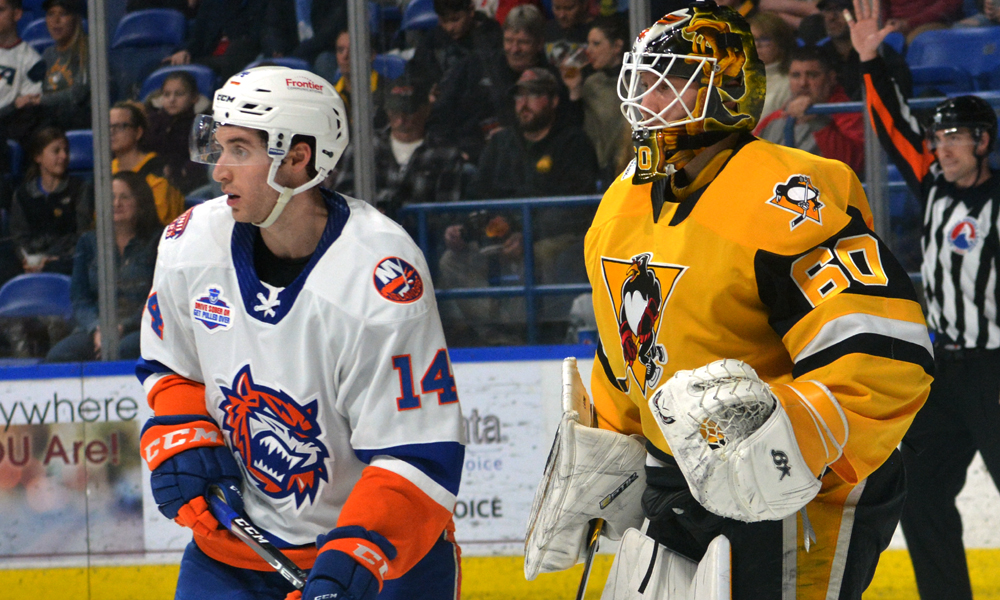 WILKES-BARRE, Pa. – The Wilkes-Barre/Scranton Penguins stretched their point streak to seven games, but lost in a shootout to the Bridgeport Sound Tigers, 3-2, on Saturday night at Mohegan Sun Arena at Casey Plaza.

Wilkes-Barre/Scranton (23-16-3-5) went seven rounds deep in the shootout with Bridgeport, trading go-ahead goals and equalizers until Simon Holmström eventually delivered the winner for the Sound Tigers.

Joseph Blandisi got the scoring started with a goal of the year candidate. On a mid-first-period power play, Blandisi slipped the puck and his stick between his own legs and hoisted the puck over the shoulder of Jared Coreau and into the top corner of the Sound Tigers net for a 1-0 lead.

The Penguins maintained that 1-0 advantage until Oliver Wahlström scored on a delayed penalty, extra-attacker situation at 15:15 of the second period. However, Jake Lucchini put Wilkes-Barre/Scranton back on top, 2-1, just three minutes later.

The Penguins seemed poised to hang on for the win, but Bridgeport had other plans. With 2:27 left in regulation, Josh Ho-Sang tied things up while the teams were skating at four-on-four.

After a scoreless overtime, the game went to a lengthy shootout. Bridgeport’s Matt Lorito scored first, but Lucchini answered back the Penguins. Thomas Di Pauli gave the Penguins the lead in the fifth round, only to see Travis St. Denis respond with the game on the line. Two rounds later, Holmström buried the final goal.

Emil Larmi finished the night with 28 saves in regulation and overtime as well as an additional four saves in the shootout. Coreau recorded 25 saves for Bridgeport and five more during the shootout.

Wilkes-Barre/Scranton’s next game is Wednesday, Feb. 5 against the Binghamton Devils. Puck drop between the Penguins and Devils is scheduled for 7:05 p.m. at Mohegan Sun Arena at Casey Plaza.