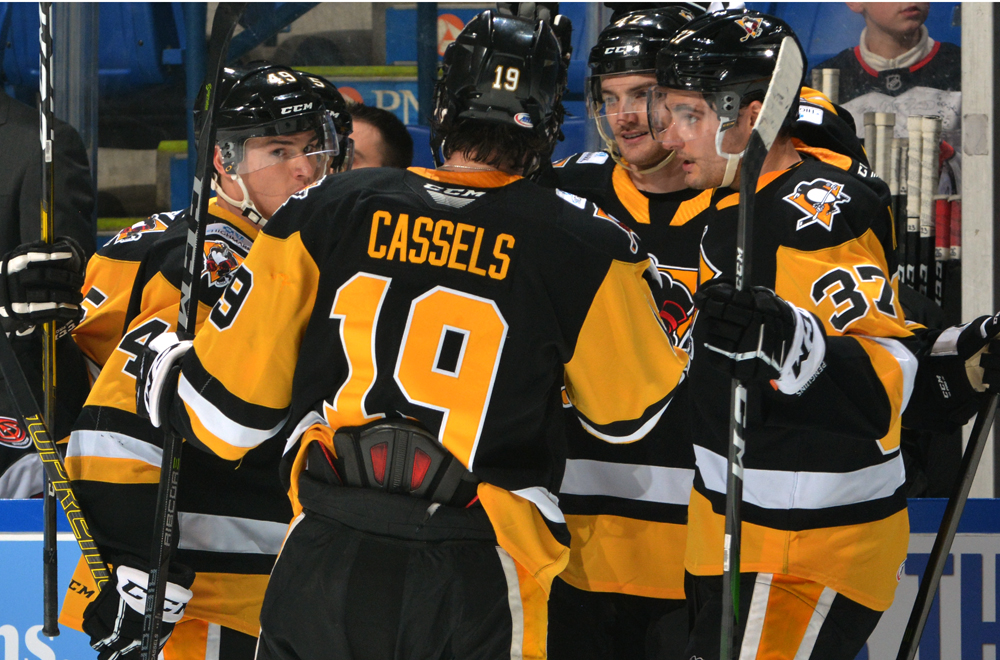 WILKES-BARRE, Pa. – The Wilkes-Barre/Scranton Penguins used an effective night on special teams to defeat the Binghamton Devils, 2-1, on Wednesday night at Mohegan Sun Arena at Casey Plaza and extend their point streak to eight games.

Wilkes-Barre/Scranton (23-16-3-5) went six-for-six on the penalty kill, and David Warsofsky tacked on both of the Penguins’ goals on the power play. With his two-tally outing, Warsofsky took over the league lead in power-play goals by defensemen (6).

The Penguins made the most of a two-man advantage late in the first period to seize the game’s first lead. Wilkes-Barre/Scranton’s captain ripped a half-slapper past the glove-hand side of Gilles Senn at 18:39 of the opening frame.

Binghamton had a chance to equalize with a lengthy five-on-three power play in the second period, but the Penguins’ penalty kill was outstanding and allowed just two shots during the entire 90-second, two-man disadvantage. However, the Devils finally got on the board at even strength, with Brett Seney setting up Nick Merkley in the slot at 11:48 of the middle frame.

Warsofsky eventually reestablished Wilkes-Barre/Scranton’s lead with another power-play goal midway through the third period. After Cole Cassels won a face-off back to the blueline, Warsofsky wasted no time in unloading his slap shot to the top corner of the Devils’ net.

Casey DeSmith ultimately made 22 saves for his fifth consecutive win, while Senn made 19 stops in defeat.

Wilkes-Barre/Scranton’s next game is Friday, Feb. 7 against the Hershey Bears. The Bears’ visit to Mohegan Sun Arena at Casey Plaza is also an Eyewitness News Fan Friday with $15 lower bowl season and $2 select draught beers on sale from 6:00 – 7:30 p.m. Puck drop between the Penguins and Bears is scheduled for 7:05 p.m..