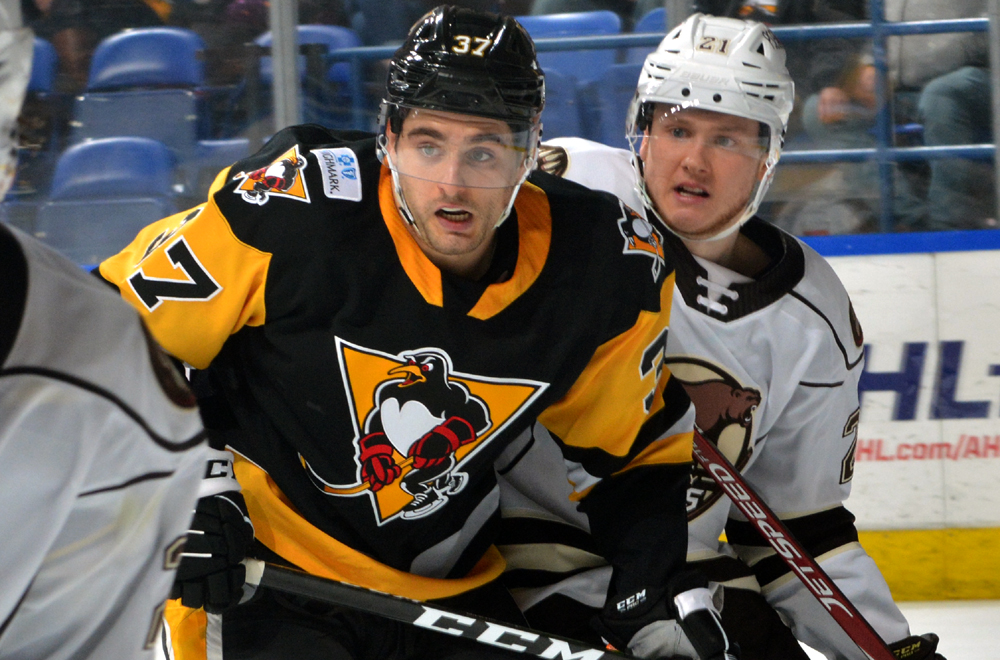 WILKES-BARRE, Pa. – The Wilkes-Barre/Scranton Penguins were shut-out, 3-0, by the Hershey Bears on Friday night at Mohegan Sun Arena at Casey Plaza.

No matter how many scoring chances Wilkes-Barre/Scranton (24-17-3-5) worked to create, Pheonix Copley was there to shut the door. Copley ultimately recorded 31 saves for his second blanking of the Penguins this season.

Hershey got the scoring started less than three minutes into the first period. During an early power play, Matt Moulson took advantage of a rebound loose in front of the Penguins’ net. The Bears’ lead increased to 2-0 at 4:32 of the middle frame when Garrett Pilon lit the lamp.

The Penguins were spurred by a stellar third-period penalty kill during which it was down by two men for 81 seconds. During the five-on-three power play, Pierre-Olivier Joseph had his stick broken while blocking a shot, leaving Wilkes-Barre/Scranton with only two skaters holding a stick. Still, they survived the entirety of the penalty kill, whipping the home crowd into a frenzy.

However, the Penguins couldn’t translate that inspiring penalty kill into offense, and Liam O’Brien eventually sealed the win for the Bears with an empty-net goal with 1:18 left in regulation.

Casey DeSmith made 28 saves in net for the Penguins.

Wilkes-Barre/Scranton’s next game is tomorrow, Saturday, Feb. 8, against the Lehigh Valley Phantoms. Puck drop between the Penguins and Phantoms is scheduled for 7:05 p.m. at Mohegan Sun Arena at Casey Plaza.