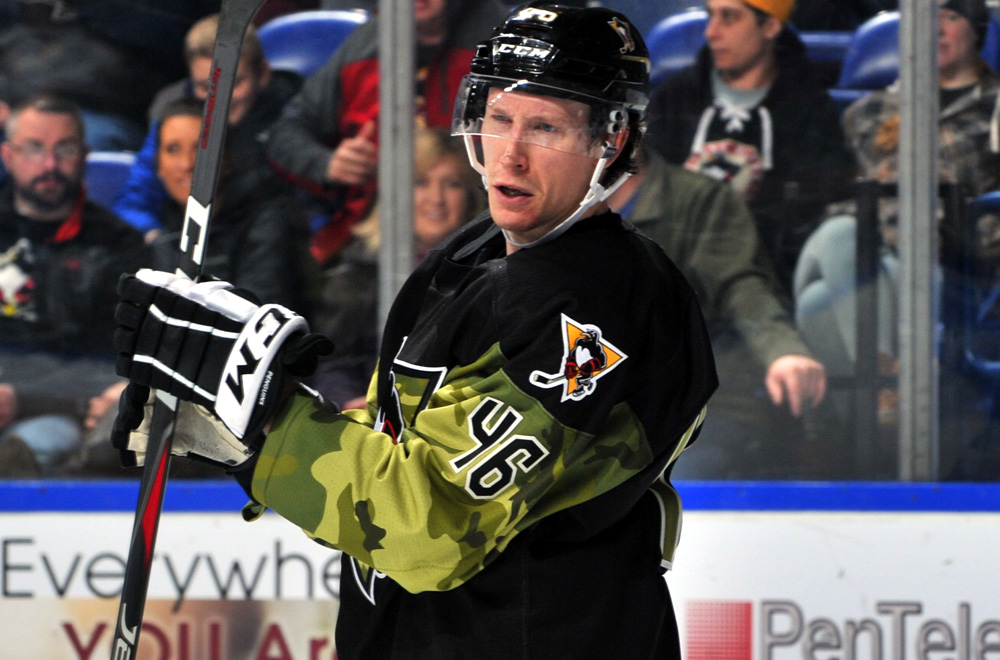 Wilkes-Barre/Scranton (24-18-3-5) attempted a late comeback, but despite Myles Powell’s first AHL goal and a highlight reel strike finished by Jan Drozg, it proved to be too big of a deficit to overcome.

The Phantoms’ Isaac Ratcliffe kicked off the scoring two minutes into the game, but the Penguins swiftly answered 56 seconds later with a snipe by Kevin Roy.

Maksim Sushko put Lehigh Valley back on top with a shorthanded goal midway through the opening frame, and Sushko struck again at 14:02 top give the Phantoms a 3-1 lead.

Kyle Criscuolo and David Kaše combined on a give-and-go passing play at 11:59 of the second period, making it 4-1. Four minutes into the third, the Phantoms took a commanding four-goal lead when Gerry Fitzgerald snuck his team’s fifth goal of the night past Emil Larmi.

The Penguins started to make things interesting with Powell’s first AHL goal at 13:07 of the third period, a center-lane drive tip-in set-up by Jake Lucchini. Later in the third, Thomas Di Pauli used his skates to kick the puck from the corner to the Phantoms’ net-front, then Jamie Devane passed it between his legs to Drozg who was waiting on the back door for the put back. Unfortunately, that tic-tac-toe play came with only 20 seconds left in regulation, not enough time for Wilkes-Barre/Scranton to erase its two-goal deficit.

Larmi made a total of 27 saves for the Penguins, while Phantoms goalie Kirill Ustimenko denied 38 shots to earn the win in his AHL debut.

Wilkes-Barre/Scranton’s next game is Wednesday, Feb. 12, against the Hartford Wolf Pack. The Penguins’ next home game is Friday, Feb. 21, when they take on the Hershey Bears. Puck drop between the Penguins and Bears is scheduled for 7:05 p.m.