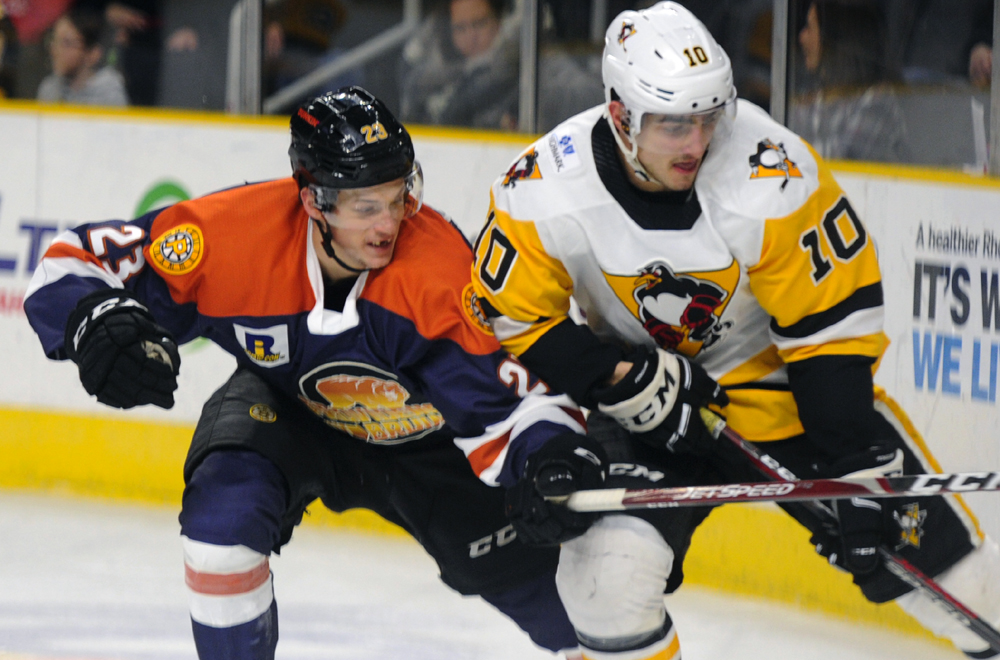 PROVIDENCE, R.I. – The Wilkes-Barre/Scranton Penguins fell to the Providence Bruins, 4-2, on Friday at Dunkin’ Donuts Center.

Wilkes-Barre/Scranton (25-19-3-5) fell behind in the first period and tried to use its special teams to come back, but Providence goalie Max Lagacé had other plans. Lagacé made 28 saves and held the Penguins at bay long enough for the Bruins to tighten their grip on fourth place in the Atlantic Division.

The Bruins’ kicked off the scoring 5:44 into the first period with Josiah Didier scoring the first goal of the night. The Penguins turned up the heat after Didier’s goal, testing Lagacé time and time again with booming point shots or plays set up from below the goal line. None of those opportunities found their way past the Bruins’ netminder.

With under two minutes left in the first period, Brendan Gaunce collected his own rebound and beat Casey DeSmith and made it 2-0.

The Penguins received their second power play of the night early in the middle frame and made the most of it. Adam Johnson took a pass from Cole Cassels and snapped the puck over Lagacé’s glove at 1:14 of the second period, slashing the Penguins’ deficit to 2-1.

Wilkes-Barre/Scranton continued to test Lagacé in the third, but he would not budge. Joona Koppanen scored Providence’s third goal of the night at 13:17 of the final frame of regulation, and Jack Studnicka tacked on an empty netter with 1:30 left.

In his first game back from injury, Jordy Bellerive notched a late marker for the Penguins, but it came with only 0.8 seconds remaining in regulation.

DeSmith made a total of 22 saves for Wilkes-Barre/Scranton.

The Penguins went one-for-four on the power play, and they managed to not take a single penalty throughout the entirety of the contest.

Wilkes-Barre/Scranton’s next game is tomorrow, Saturday, Feb. 15, against the Bridgeport Sound Tigers. The Penguins’ next home game is Friday, Feb. 21, when they take on the Hershey Bears. Puck drop between the Penguins and Bears is scheduled for 7:05 p.m.