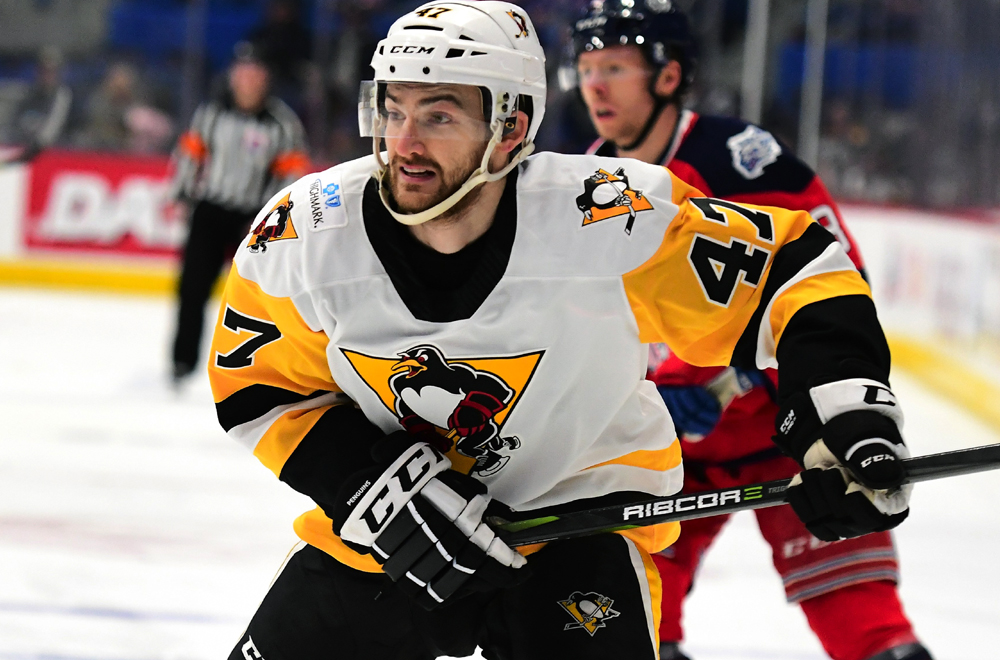 HARTFORD, Conn. – Adam Johnson scored on a penalty shot in overtime for the Wilkes-Barre/Scranton Penguins to defeat the Hartford Wolf Pack, 4-3, on Saturday at XL Center.

Wilkes-Barre/Scranton (27-20-3-5) and Hartford traded goals back-and-forth throughout the game, but Johnson’s overtime heroics gave the Penguins’ the edge in sudden-death overtime.

A minute and a half into the extra session, Wolf Pack defenseman Vincent LoVerde tripped and fell, giving Johnson a breakaway. Johnson was hauled down from behind during this chance and was awarded a penalty shot. One-on-one with Hartford goalie Adam Húska, Johnson made a quick fake and then slipped the puck through Húska’s five-hole.

Johnson was then mobbed by his teammates, celebrating the second overtime, penalty-shot goal in franchise history.

Wilkes-Barre/Scranton struck first, with Cole Cassels redirecting a John Nyberg slap shot at 11:16 of the first period. The Wolf Pack’s Danny O’Regan evened the score, 1-1, 45 seconds into the middle frame, but the tie did not last long. Ryan Scarfo answered back less than two minutes later with his first goal of the season, putting the Penguins back on top, 2-1.

With the Penguins seemingly poised to enter the second intermission with the lead, Vinni Lettieri collected a rebound off the back boards, banked it off of Wilkes-Barre/Scranton goalie Dustin Tokarski and in with 37.3 seconds left in the period.

Kevin Roy gave the Penguins a 3-2 upper hand at 3:21 of the third period, but Vitali Kravtsov volleyed back with a breakaway goal midway through the final frame of regulation.

Wilkes-Barre/Scranton’s penalty kill went a perfect six-for-six on the night, including a clutch kill late in the third period when the game was tied, 3-3. The Penguins’ penalty killing prowess gave way to the overtime that featured Johnson’s shifty game-winner.

Tokarski made 25 saves for the Penguins, while Húska denied 16 bids for the Wolf Pack.

Wilkes-Barre/Scranton’s next game is tomorrow, Saturday, Feb. 22, when it takes on the Providence Bruins at Dunkin’ Donuts Center. The Penguins’ next home game is Wednesday Feb. 26, a rematch against the Bruins. Puck drop between the Penguins and the Bruins is scheduled for 7:05 p.m. at Mohegan Sun Arena at Casey Plaza.