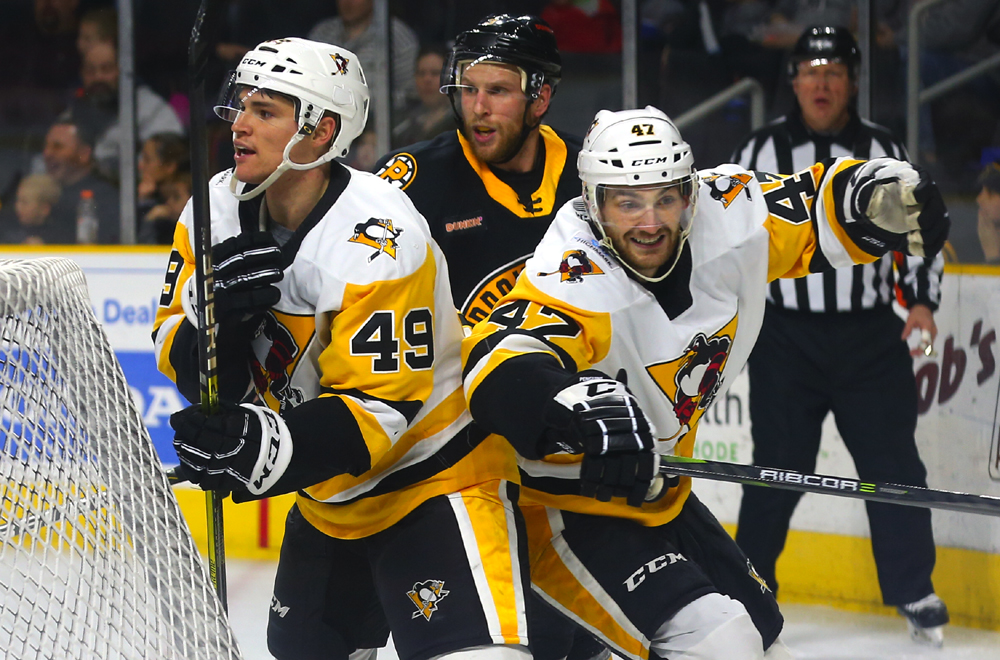 PROVIDENCE, R.I. – The Wilkes-Barre/Scranton Penguins lost to the Providence Bruins, 2-1, on Sunday at Dunkin’ Donuts Center.

Playing in its third game of a three-in-three, Wilkes-Barre/Scranton (27-21-3-5) battled to the bitter end, but couldn’t come back to trounce its Atlantic Division rival.

Providence wasted no time getting on the board, using a snipe by Zach Senyshyn to assume a 1-0 lead just 1:52 into the game. Bruins goalie Max Lagacé made a number of solid stops on the Penguins late in the first period to maintain his team’s one-goal edge.

Steven Kampfer buried one for Providence with only 0.4 seconds left in the middle frame. The defenseman’s late-period buzzer-beater put the Bruins in a 2-0 lead before the second intermission.

Kevin Roy and Adam Johnson combined on a pretty passing play to set up Cole Cassels for the Penguins’ lone goal of the night 63 seconds into the third period. Wilkes-Barre/Scranton proceeded to out-shoot the Bruins, 10-6, in the third period, but Lagacé held down the fort for Providence.

Lagacé finished the game having made 20 saves, while Dustin Tokarski turned aside 25 shots for the Penguins.

Wilkes-Barre/Scranton’s next game is Wednesday, Feb. 26 when it gets another crack at the Providence Bruins on home ice. Puck drop between the Penguins and the Bruins is scheduled for 7:05 p.m. at Mohegan Sun Arena at Casey Plaza.