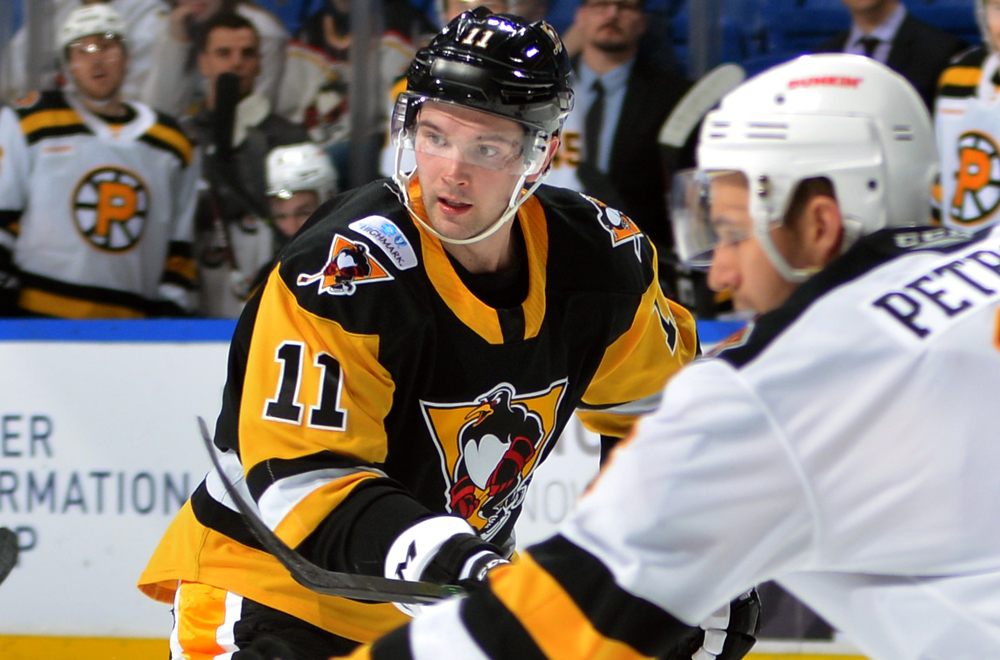 WILKES-BARRE, Pa. – The Wilkes-Barre/Scranton Penguins lost to the Providence Bruins, 6-2, at Mohegan Sun Arena at Casey Plaza on Wednesday night.

Wilkes-Barre/Scranton (27-22-3-5) struck early, but a big output by Providence in the second period spoiled the night for the Penguins and their fans at home.

The Penguins wasted little time getting on the board, scoring 2:12 into the first period. After a point shot by Pierre-Olivier Joseph led to a loose puck at the net-front, Sam Miletic found the rebound amidst the swarm and hoisted it under the crossbar for the game’s opening goal.

A Josiah Didier blast that followed a face-off win by the Bruins tied the contest, 1-1, midway through the first frame.

Providence’s offense took flight in the second period, starting with a goal by Cameron Hughes 41 seconds into the frame. Hughes struck again for the Bruins at 7:26 of the second, making it 3-1.

A silver lining in the second period was Riley Barber notching his first goal as a Penguin on a breakaway, but the Bruins’ Cooper Zech responded a mere 1:28 later and put Providence in a 4-2 lead.

Shortly after the Penguins successfully fended off their fourth penalty kill of the night, Peter Cehlárik banged home a one-timer for the Bruins at 2:12 of the third period. That final frame of regulation featured several five-on-three power plays between the two clubs. Ultimately, one of those two-man advantages resulted in a Steven Kampfer goal that put the game out of reach, 6-2.

Casey DeSmith made 35 saves in defeat, while Dan Vladař denied 24 shots for the Bruins.

Wilkes-Barre/Scranton’s next game is Friday, Feb. 28, when it pays its only visit to Syracuse this season and takes on the Syracuse Crunch. The Penguins’ next home game is Saturday, Mar. 7 against the Bridgeport Sound Tigers. Puck drop between the Penguins and the Sound Tigers is scheduled for 7:05 p.m. at Mohegan Sun Arena at Casey Plaza.