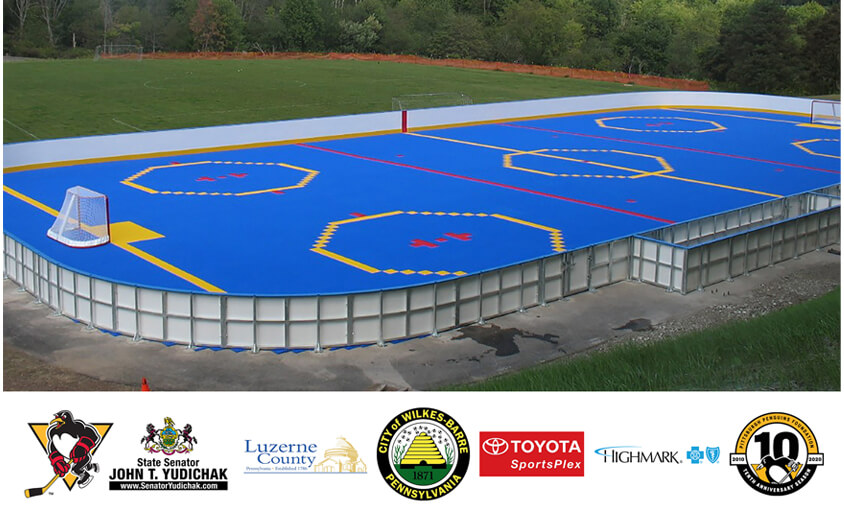 A multi-functional dek hockey rink and community event space will be the newest addition to the Toyota SportsPlex complex, thanks to a $250,000 Pennsylvania Department of Community & Economic Development (DCED) Tourism Grant secured by State Senator John T. Yudichak.

The rink development – part of the Pittsburgh Penguins Foundation’s Project Power Play – was announced Thursday morning during a press conference at the facility, located inside Coal Street Park in Wilkes-Barre.

“For more than twenty years, our beloved Wilkes-Barre/Scranton Penguins have been great teammates with the city of Wilkes-Barre and Luzerne County in making professional hockey a cornerstone of our tourism economy that attracts thousands of visitors, creates hundreds of jobs, and leverages millions of dollars in private investment in northeastern Pennsylvania,” said State Senator John Yudichak (I-Luzerne/Carbon).

“Our partnership with the Penguins continues with the exciting news that the Pittsburgh Penguins Foundation’s Project Power Play and a brand new dek hockey rink is coming to the Toyota SportsPlex in Wilkes-Barre with the assistance of a $250,000 state tourism grant from the Department of Community and Economic Development.”

In addition to the state grant, the Pittsburgh Penguins Foundation and Highmark Corporate Giving have each pledged $40,000.00 for the project.

Project Power Play has built more than a dozen dek hockey rinks throughout Western Pennsylvania and Eastern Ohio over the past decade, helping to introduce the sport to more than 4,000 new youth participants in the process.

“We are extremely grateful for the hard work that Senator Yudichak put in to secure this grant.  We also wouldn’t be here today without the financial commitments of the Pittsburgh Penguins Foundation and Highmark as well,” said Wilkes-Barre/Scranton Penguins CEO Jeff Barrett.  “This new addition to the Toyota SportsPlex will allow hundreds of youngsters to participate in the great game of hockey while helping to build healthy bodies and growing the sport throughout NEPA.”

The Wilkes-Barre rink – the first of its kind in the area – will be located adjacent to the Toyota SportsPlex, outfitted with sport court flooring featuring lines and face-off circles, as well as a scoreboard and covered bench areas.

The facility will afford youngsters interested in playing hockey an affordable introduction to the sport.

“We appreciate the work of Senator Yudichak for helping us obtain funding for this project which will provide countless hours of activities for residents and visitors and bring new economic development opportunities to the city of Wilkes-Barre and Luzerne County,” said Dave Pedri, Luzerne County Manager. “It’s a great day for hockey in the city of Wilkes-Barre and the future looks even brighter with the new hockey dek.”

“We are excited to partner with the Wilkes-Barre/Scranton Penguins, the Pittsburgh Penguins Foundation, Highmark and the Coal Street Authority Board on this exciting project that will help grow the sport of hockey in Wilkes-Barre,” said Mayor George Brown. “Thank you to Senator Yudichak for helping us with our vision to create more recreational opportunities for our residents and visitors through the creation of this dek hockey rink and community event space.”

Youth hockey programs at the rink – including learn to play classes, clinics, leagues and tournaments – will be administered by Toyota SportsPlex staff, under direction of the Wilkes-Barre/Scranton Penguins.

“A big part of being in the community means supporting important community projects, especially a terrific one like this which will impact so many lives,” said Brian Rinker, Market President for the Northeast and Central Pa. regions of Highmark. “Being active, helping families have a place to go and do things together like this is fantastic and we are really pleased to be part of it. A big thank you to all the supporters who helped make this a reality.”

In addition to dek hockey, community organizations will be able to utilize the rink for special events, retreats and team building activities.

Construction on the rink is expected to begin later this spring and be completed by mid-summer.