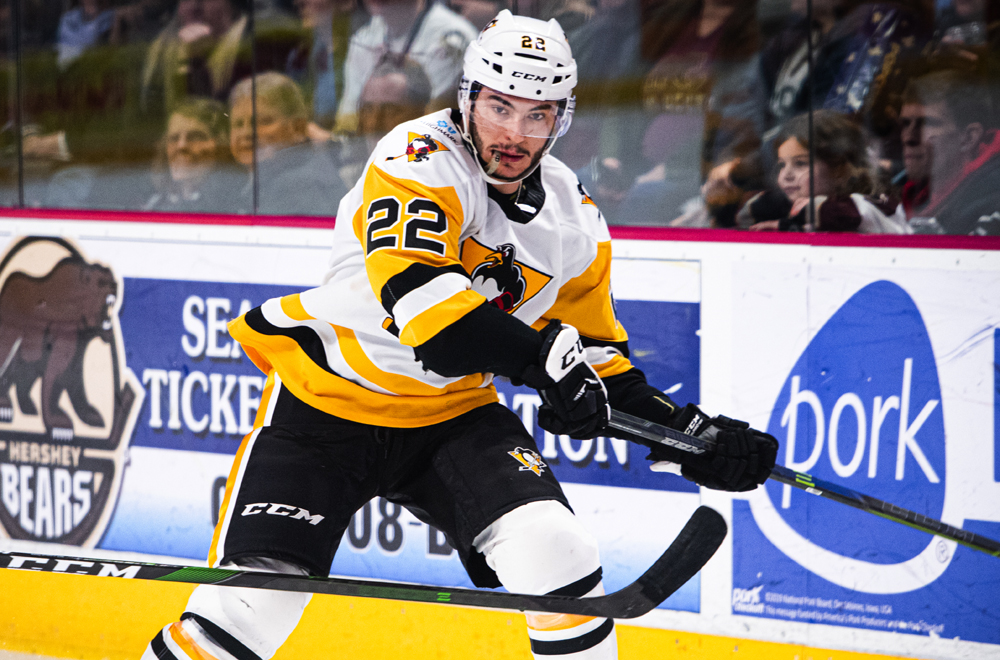 HERSHEY, Pa. – The Wilkes-Barre/Scranton Penguins lost to their in-state rival, the Hershey Bears, 5-1, at Giant Center on Saturday.

Wilkes-Barre/Scranton (27-24-3-5) saw its opponent take an early lead, and despite a valiant second-period burst and nine power plays, the Penguins couldn’t stage a comeback.

Hershey opened the scoring at 4:52 with a breakaway goal from Garrett Pilon. Daniel Sprong added to that lead four minutes later by swatting an airborne puck into the top corner of the Penguins’ net.

Mike Sgarbossa kept up the pace for the Bears, tallying into an empty net at 4:17 of the second period after a turnover behind the Penguins’ net. Hershey swiftly assumed a commanding 4-0 lead when Philippe Maillet tallied less than two minutes later.

The third power play was the charm for the Penguins, as David Warsofsky put them on the board at 8:54 of the middle frame with a slap shot following a faceoff win by Phil Varone.

Warsofsky’s goal buoyed Wilkes-Barre/Scranton, and the team started racking up a bevy of shots after the captain’s man-advantage marker. However, Hershey regained its four-goal edge when Sgarbossa notched his second of the night with less than five minutes before the second intermission.

Casey DeSmith made 23 saves in net for the Penguins, while Vítek Vaněček put up 24 stops for the Bears.