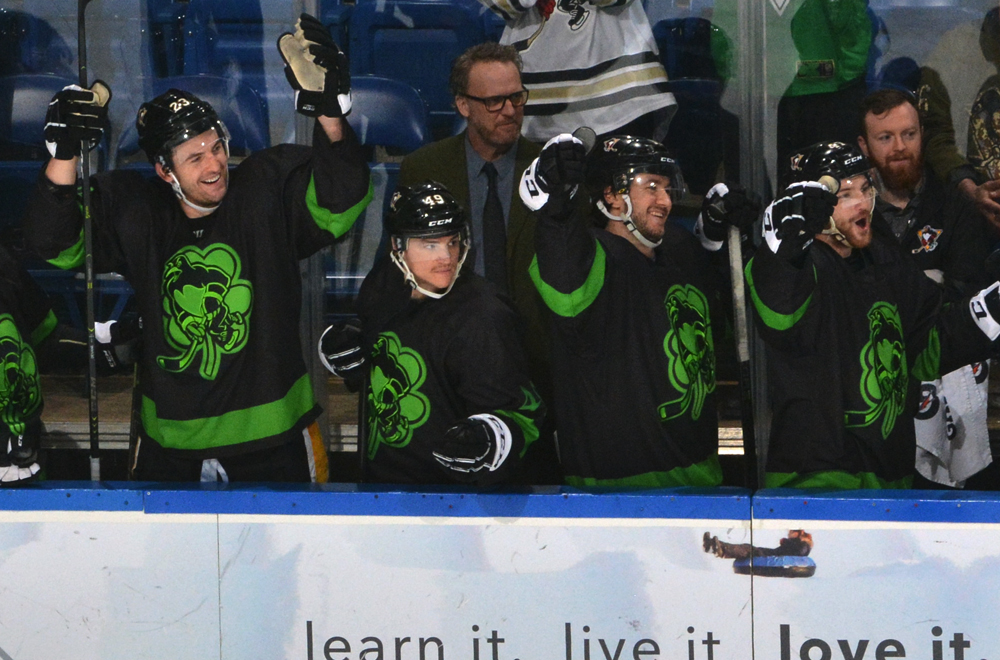 WILKES-BARRE, Pa. – The Wilkes-Barre/Scranton Penguins found a pot of gold at the end of their annual St. Patrick’s Day celebration, earning a 5-2 win over the Bridgeport Sound Tigers at Mohegan Sun Arena at Casey Plaza on Saturday.

Wilkes-Barre/Scranton (28-25-3-5) found consistent scoring in all three periods and saw tallies from five different goal-scorers en route to a victory that propelled the team up the Atlantic Division standings into fifth place.

Fireworks broke out 11 seconds into the game, as Jamie Devane dropped the gloves with Cédric Lacroix in a spirited fight. In spite of a 25-minute ice-maintenance delay following the bout, the Penguins were still spurred by Devane’s fisticuffs. Wilkes-Barre/Scranton kicked off the scoring at 5:50, when Kevin Roy neatly tipped in David Warsofsky’s point shot.

Jordy Bellerive and Jan Drozg tallied back-to-back power-play goals for the Penguins in the second period, ballooning their lead to 3-0. However, Bridgeport answered with a man-advantage marker of its own coming from the stick of Oliver Wahlström at 12:03 of the second period.

Zach Trotman reestablished Wilkes-Barre/Scranton’s three-goal edge with a huge slap shot at 15:34 of the second period.

Seth Helgeson slipped the biscuit past Dustin Tokarski with 5:10 left in the third period, rearranging the score to 4-2. However, any lofty comeback hopes for the visitors were dashed by an empty netter from Chase Berger, his first goal of the season.

Tokarski made 20 saves while manning the crease for the Penguins, while Jakub Škarek notched 27 stops for the Sound Tigers.

Wilkes-Barre/Scranton’s next game is tomorrow, Sunday, Mar. 8, against the Binghamton Devils. Tomorrow’s tilt is also the first Kids Free Sunday of the season. Children aged 14 and under gain admission to the game for free with the paid purchase of an adult ticket. Puck drop between the Penguins and Devils is scheduled for 3:05 p.m. at Mohegan Sun Arena at Casey Plaza.