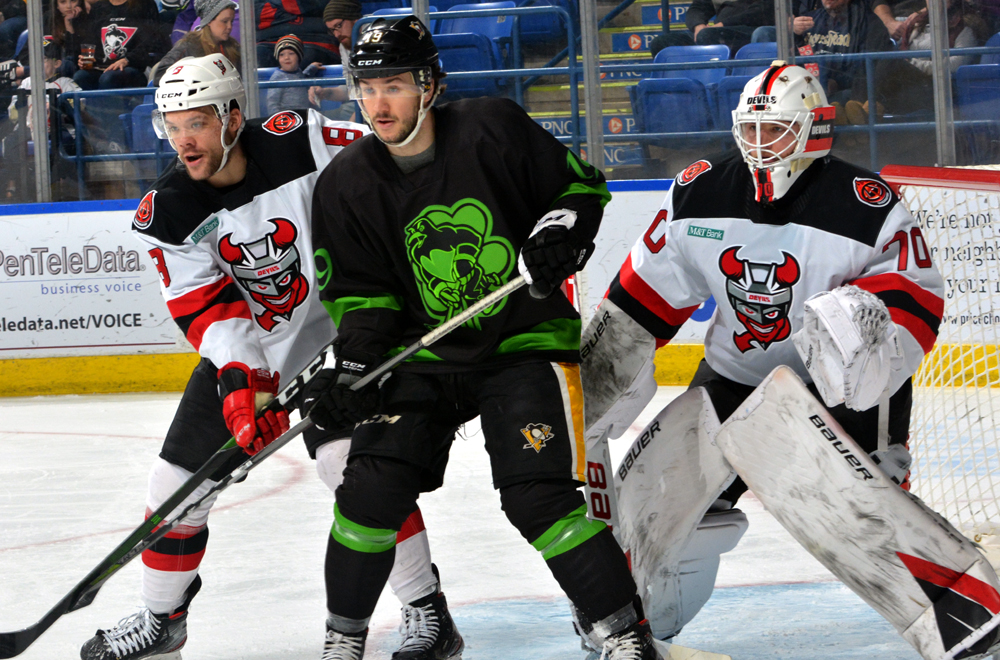 WILKES-BARRE, Pa. – The Wilkes-Barre/Scranton Penguins lost to the Binghamton Devils for the second time this weekend, dropping a 3-0 decision on Sunday afternoon at Mohegan Sun Arena at Casey Plaza.

Wilkes-Barre/Scranton (28-26-3-5) reconvened with Binghamton hoping to avenge its loss from this past Friday, but instead, the Penguins ran into the hot hand of Zane McIntyre. The Devils’ netminder stopped all 27 shots faced en route to beating the Pens.

Jesper Boqvist opened the scoring at 8:17 of the middle frame, whipping a swift wrist shot past Casey DeSmith.

The Penguins tried to rally in the latter half of the second period, but McIntyre was there at every turn. McIntyre’s most notable save came during a Penguins power play when Zach Trotman was looking at a wide open net only to see the Devils’ goalie lunge across with a acrobatic pinwheel save. McIntyre also denied Adam Johnson on a late second-period breakaway to keep the Penguins off the board.

Binghamton scored again only 12 second into the final frame. Brett Seney was responsible for giving his team a 2-0 lead.

The third period continued with two key penalty kills by Wilkes-Barre/Scranton, but offense never materialized. Brandon Baddock ensured victory for the visitors with an empty-net goal late in the game.

Despite the loss, DeSmith performed valiantly in goal for the Penguins, making 26 saves.