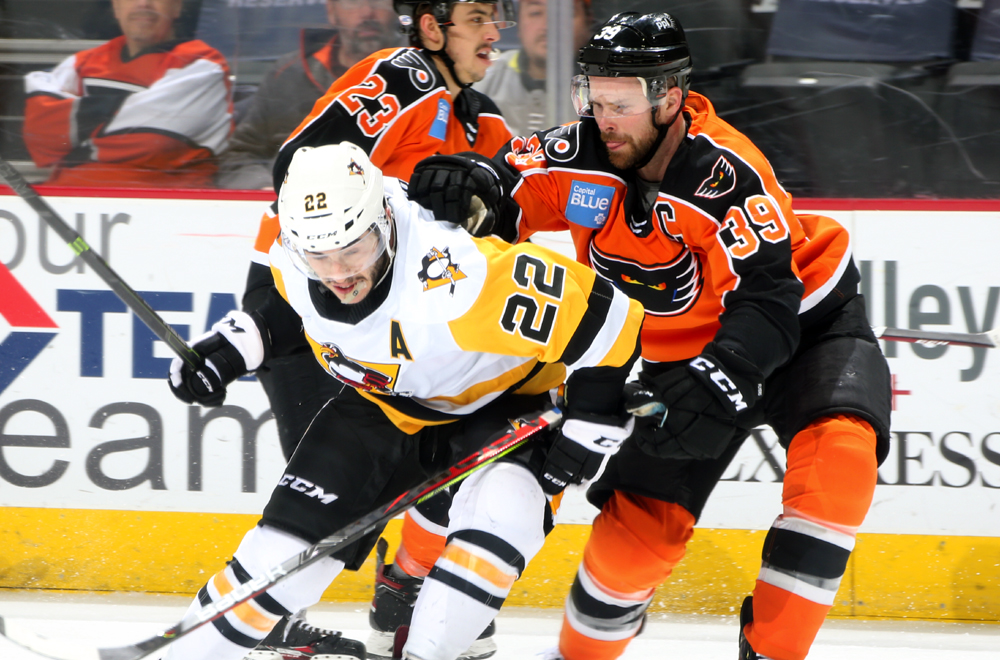 Riley Barber and Phil Varone linked up for the overtime-winner 55 seconds into the extra frame, propelling Wilkes-Barre/Scranton (29-26-3-5) to victory in a game that was almost stolen by the opposing goaltender.

Alex Lyon shined in net for Lehigh Valley late in the first period, turning aside a number of great scoring chances for the Penguins. Wilkes-Barre/Scranton’s best look arrived with 5.2 seconds left in the frame, but Barber’s rebound attempt was robbed by Lyon.

The Penguins came out with a furious start to the second period, out-shooting the Phantoms, 9-1, in the first five minutes of the frame. However, Lyon rebuffed them at every turn.

Kevin Roy broke through for Wilkes-Barre/Scranton at 15:20 of the second stanza, ripping a shot from the high slot through traffic and to the back of the net.

Lehigh Valley evened the scales, 1-1, with a tip-in by Kurtis Gabriel 13 minutes into the third period.

Early in the overtime, Varone raced back into the Penguins’ zone to break up a Phantoms scoring chance. He then took the puck, charged up ice, walked to the front of the Phantoms’ net, but delivered a slick pass to Barber who nailed the one-timer.

Lyon finished the game with 33 saves for Lehigh Valley, while Dustin Tokarski notched 24 stops in the victory.

Wilkes-Barre/Scranton’s next game is Friday, Mar. 13, once again at PPL Center against the Lehigh Valley Phantoms. The Penguins’ next home game is Wednesday, Mar. 18, against the Cleveland Monsters. Puck drop between the Penguins and Monsters is scheduled for 7:05 p.m. at Mohegan Sun Arena at Casey Plaza.