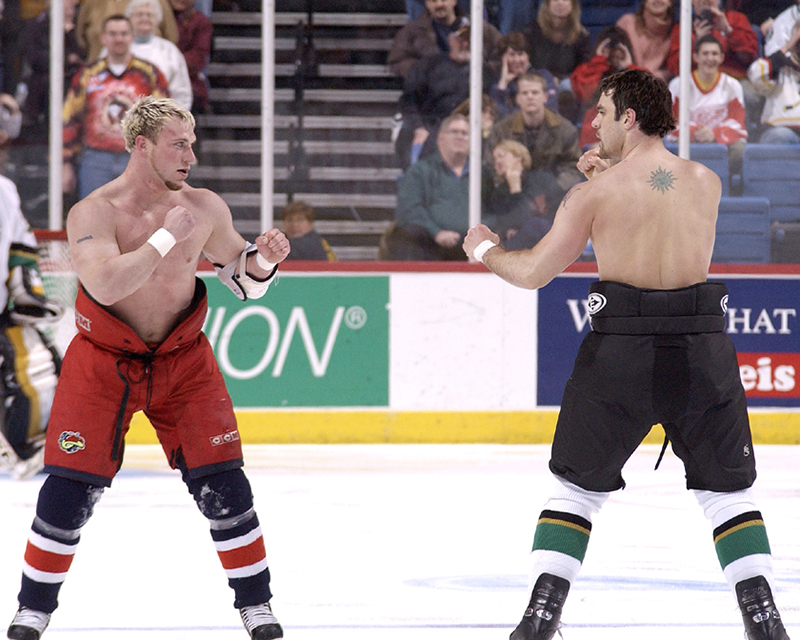 The Wilkes-Barre/Scranton Penguins have played 1,476 regular season games as of March 17, 2018, and quite a few of those hold memorable moments for players and fans alike.  But the one game that undoubtedly stands out among all of those in the crowd was played on March 17, 2002 in Wilkes-Barre – the St. Patrick’s Day Massacre.

Two years ago, we unearthed an old VHS tape of the game and converted it over to digital.  This is the cleanest copy of this game we can find, and although it doesn’t have an audio track, you’ll still get a good feel for what’s going on.

We’ve broken down all of the key moments of the 4-0 loss for you right here, to give you a glimpse of the most memorable game in team history.

It didn’t take long for the fists to start flying.

Syracuse’s Brad Wingfield, who had only recently joined the Crunch after posting 472 penalty minutes in just 49 games with the United Hockey League’s Elmira Jackals,   tangled with Darcy Verot in the slot.  Steve Parson’s didn’t take kindly to the Crunch tough guy picking on Verot, and stepped in.  Each was given a modest five minutes for this altercation:

The first period fireworks weren’t over though.  A Pens shot bounced off the back boards toward the front of the Syracuse net, and Wilkes-Barre/Scranton’s Jason MacDonald made a beeline toward the puck, which was gobbled up by netminder J.F. Labbe.  MacDonald was pulled down by Alex Johnston, and the duo dropped the gloves (Johnson also received two minutes for holding).

There were some minor incidents late in the first (a Brendan Walsh slash offset by an Andrei Srybko rough), and Steve Parsons picked up 14 minutes in one swoop with high sticking, unsportsmanlike conduct and 10-minute misconduct infractions at 5:40.

Walsh and Duvie Westcott raised the temperature a bit further when they tangled in front of the Crunch net.

But the night didn’t get really interesting until the third period was seven minutes old.

Wingfield laid out an unsuspecting John Jakopin in the neutral zone with a strong shoulder, which led to the Pens defenseman chasing after Wingfield.

Jakopin wasted no time in challenging Wingfield off of the ensuing faceoff.   And then, well, all heck broke loose.

There was a lot happening there, so let’s recap:

1) Jakopin and Wingfield square off, with each throwing punches while the other was on his back.
2) MacDonald grabs Winfield and lands a few blows of his own, before Parsons arrives on the scene.  That earned Parsons a third man in penalty.
3) Not to be outdone, J. F. Labbe entered the fray from his crease, and was also assessed a third man in penalty.
4) Darcy Verot heads over to take on Labbe, but is pulled away by Brett Harkins.
5) Parsons then turns his attention to Adam Borzecki, who was tied up with Bert Robertsson on the near boards.
6) Parsons reemerges, trying to get to Wingfield, who is at the bottom of a scrum with MacDonald and Jamie Heward on top.
7) Things appear to settle down momentarily, until Parsons sees Wingfield on the far side of the ice.
8) Parsons undoes his fight strap to slip the linesman, then throws off his shoulder pads (and undershirt), leading to the topples tussle with Wingfield at the red line.

Meanwhile, MacDonald and David Ling had been trading blows back where the initial penalties occurred.  As Ling began to back out of the fight (featuring yet another shirtless combatant in MacDonald), Sryubko jumps from the Syracuse bench to challenge the wiped-out MacDonald.

The tally, player by player, for just the above carnage:

Parsons’ night came to an end with 64 PIMs next to his name, an American Hockey League record for penalty minutes in a game (two minors, two majors, 1 misconduct, 4 game misconducts).

Parsons probably could have had a few more minutes tagged on if the ref’s would have seen this:

While Parsons’ and MacDonald’s nights had come to early ends, Verot remained in the game.  But with less than five minutes left in the game, he found himself sent to the showers early as well for this fight with Jeremey Reich:

In addition to the fighting major, Verot was given a match penalty intent to injure.