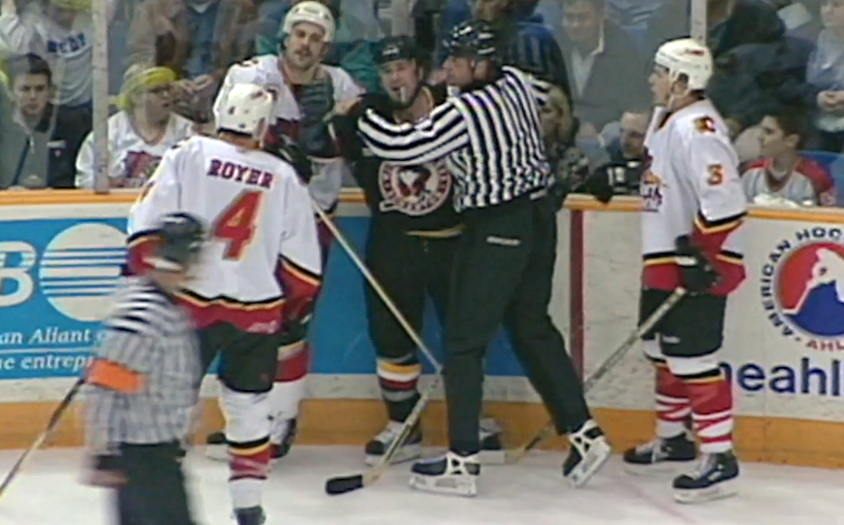 We’ve spent some time digging through our tape archives during the stoppage in play, and stumbled upon this gem recently – video footage of the Wilkes-Barre/Scranton Penguins first trip to the Calder Cup Finals in 2001.

The Penguins advanced to the championship round in just their second season of existence, and faced off with the Saint John Flames for the league’s top prize.

Saint John finished the season with 100 points and atop the Canadian Division standings.  They breezed through the first three rounds of the playoffs, dispatching of the Portland Pirates (3-0), Quebec Citadelles (4-1) and Providence Bruins (4-1) en route to the championship round.

The Penguins placed third in the Mid-Atlantic Division with 83 points, battled through the Syracuse Crunch (3-2) and Philadelphia Phantoms (4-2), before sweeping the Hershey Bears in the Conference Finals.

Game One of the series took place on May 17 in Saint John, New Brunswick, and it didn’t take long for the action to unfold, as the Penguins jumped out to a 1-0 lead just 19 seconds into the game as Darcy Verot followed up Alexandre Mathieu’s partial breakaway.

It was Mathieu doubling the lead 17:22 later, as his slapshot off of the two-on-one beat future Penguins’ netmider Martin Brochu.

Derrick Walser got the home team on the board with a blast off of the face-off win to make it 2-1 at 16:06 of the second.

But the Penguins responded quickly, as Martin Sonnenberg pushed home a Josef Melichar shot from the far boards 45 seconds later to make it 3-1.

Jason MacDonald scored on a similar play 1:20 into the third period to push the lead to three goals, before a pair of future Penguins – Micki DuPont ad Rico Fata – made a game of it for the home club.

But Rich Parent was strong in net, stopping 38 shots overall to give the Penguins the victory.

Did you make the trip up to Canada for this historic game in Wilkes-Barre/Scranton Penguins history?  There’s plenty of good fan footage in this raw video reel, so keep your eyes open!