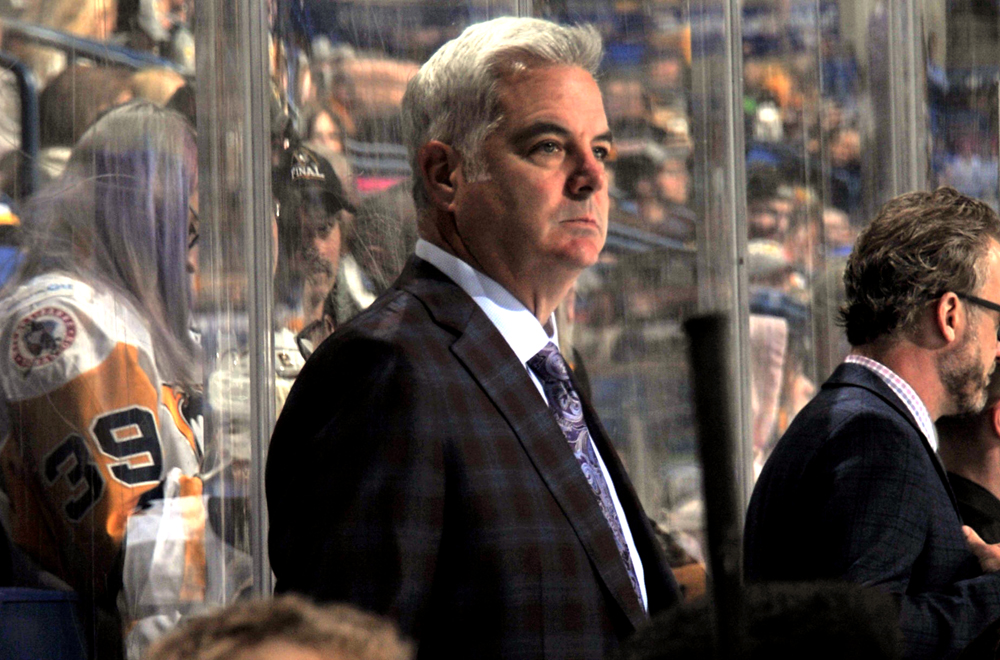 PITTSBURGH, Pa – At the end of the OHL Playoffs in 2007, Mike Vellucci stepped onto the ice to celebrate with the Plymouth Whalers. Everyone huddled around the J. Ross Robertson Cup and posed for a picture, Vellucci peering over the shoulder of his players with a big smile on his face. They were OHL Champions, the perfect cap to a season in which Vellucci was named OHL Coach of the Year.

Fast-forward 12 years later, and Vellucci experienced a similar celebration. This time, it was at the end of an AHL playoff run, and he was hoisting the Calder Cup over his head. Once again, he and his team stood tall at the end of a season in which he won the league’s Coach of the Year honors.

Over the course of 20-plus years as a head coach at multiple levels of hockey, Vellucci has experienced a significant amount of success. All that time, he had a goal in mind to reach the NHL. And over the course of those two decades, his accolades attracted NHL suitors, but Vellucci never jumped at the opportunity.

After biding his time for the perfect opportunity to arise, Mike Vellucci believes he’s finally found the perfect fit. As of Wednesday morning, the 54-year-old from Farmington, Michigan can finally say he’s an NHL coach.

“I’ve had chances to move up at other times, but this is the best opportunity as far as learning and getting involved,” Vellucci said via video conference call on Wednesday. “It’s the best organization, and to work with [Mike Sullivan] and Todd [Reirden], they both have been NHL head coaches, the chance to learn from them is huge.

“[This opportunity] means a lot.”

The opportunity comes in the form of an assistant coaching job with the Pittsburgh Penguins. Vellucci happily joined Reirden on Sullivan’s staff on Wednesday, the NHL fit that he’d waited so long to find.

While the many successes he earned behind the bench likely made the wait much more tolerable in the interim, Vellucci believes his patience came out of respect for his family.

“It’s something I always wanted to do, but something I was never in a rush to do,” Vellucci said. “Everyone thinks it’s a sprint, when it’s really more of a marathon. Do things when the timing is right and the people are right. This feels like the right situation. It was the right time for my family. Previous times, my kids were younger and they were still in school, and I didn’t want to be moving every year. Family is important to me, so it was really about waiting for the right time.”

Now he and his family all get to share in his excitement, as Vellucci will be stepping behind an NHL bench for the first time at the start of the 2020-21 season for Pittsburgh.

“My mom and dad are 80 years-old, so it was pretty exciting to share that with them,” he said.

Vellucci spent a good portion of his media availability on Wednesday not only remarking on the excitement he and his family share for this opportunity, but also repeating his admiration for both Sullivan and Reirden. Vellucci views the chance to work alongside them as invaluable.

Furthermore, standing next to two coaches who both have their names etched on the Stanley Cup will serve as further affirmation of how far he has come since he started as Compuware’s head coach in 1994.

Not only will Vellucci have accomplished coaches to work with back in the office, his first NHL gig will also include working with an impressive glut of on-ice talent too. Pittsburgh announced that he will oversee the team’s forwards, a group that includes ho-hum names like Sidney Crosby and Evgeni Malkin.

While working in Wilkes-Barre/Scranton this past year, Vellucci gained an even greater appreciation for his new top-two centermen.

“They’re the best players in the world,” Vellucci said. “I watched every Pens game this year, more than I ever had. It’s fun to watch the skill and the will that those guys have. I’ve had some high-end skill guys in the past, players like Tyler Seguin, James Neal, Vince Trocheck, Rickard Rakell, but that was when they were younger. These guys (Crosby and Malkin) are in the prime of their career. So it’s going to be really exciting to work with them.”

Thrilled to work with his gifted forward corps and thrilled to work alongside two coaches whom he greatly respects, Vellucci can’t wait to start the job he waited so long to find. However, he made it clear that he has no intention to rest on his laurels and stop utilizing the work ethic that got him to this point.

“I want to bring energy and enthusiasm, and I’m not going to take it for granted that I’m in the NHL. I want to be the best forward coach and best penalty killing coach in the league.”