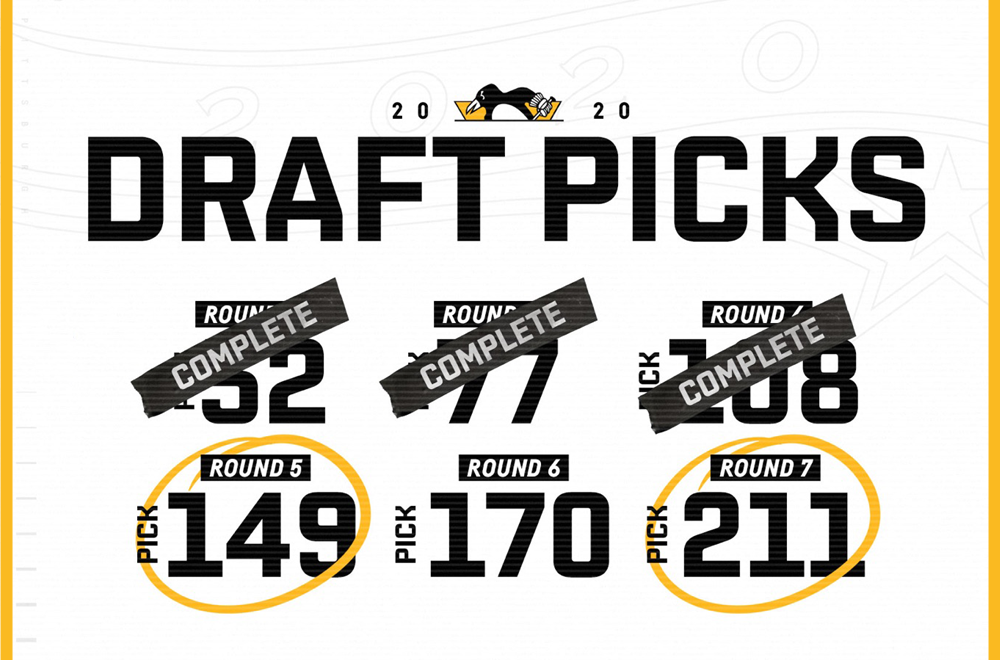 WILKES-BARRE, Pa. – After being delayed from late June to early October, the 2020 NHL Entry Draft finally took place. The first round was on Tuesday, whereas rounds two through seven took place on Wednesday. Without a first-round pick in 2020, the Pittsburgh Penguins made sure to stay busy in the later rounds. Our Nick Hart kept a close eye on all the action and is happy to share his thoughts and analysis on Pittsburgh’s busy day!

Hey, all! Thanks for reading! Hope you enjoyed your Wednesday, because I spent mine glued to the couch, working through an interminably long Day 2 of the 2020 NHL Entry Draft.

MURRAY ON THE MOVE

First off, we have to start by discussing the biggest news of the day. Not long after the second round of the draft began, the Pittsburgh Penguins announced that they had traded goaltender Matt Murray to the Ottawa Senators. In exchange for the two-time Stanley Cup Champion, the Penguins received the 52nd overall pick and prospect Jonathan Gruden.

Murray was a wunderkind for the Penguins organization. Goalies have no business being so good at such a young age, but that’s exactly what Murray was. Wilkes-Barre/Scranton Penguins fans had the first look at Murray’s ascent, as he wowed the black and gold faithful while frustrating opponents as the best goalie in the league. That’s not an exaggeration. Murray won the AHL’s Rookie of the Year and Best Goaltender Awards for a season in which he led the league in save percentage (.941), goals against average (1.58) and set the league record for shutouts (12). He did this all before his 21st birthday.

The Thunder Bay, Ontario native followed up that sensational rookie season by leading Pittsburgh to back-to-back Stanley Cup titles in 2016 and 2017.

Murray’s departure from the organization comes after he struggled to find that same form in ensuing seasons. Plus, mix in the fact that he was a restricted free agent, the NHL’s salary cap remained flat as a result of the COVID-19 pandemic, and the emergence of Tristan Jarry (another impressive Wilkes-Barre/Scranton alum) as an NHL All-Star and you end up with a recipe that forced the organization to move on from Murray sooner than anyone would have predicted three years ago.

Murray may not be a Penguin anymore, but he did give fans at both the AHL and NHL level unforgettable memories that will last forever. Here’s to wishing nothing but the best and continued success for Murray in the rest of his career. And here’s to welcoming Gruden and the player Pittsburgh snagged at 52 to the Penguins organization, as well! Speaking of which…

WITH THE 52ND PICK, THE PITTSBURGH PENGUINS ARE PROUD TO SELECT…

Having traded a goalie to get this pick, it makes sense that Pittsburgh would add a goalie to their system with the selection. And it’s a good one. The Penguins picked up Finnish goalie Joel Blomqvist, a young man who led all netminders in the top Finnish junior league with a .930 save percentage and was named Goalie of the Year. He also won the Jr. A SM-liiga Championship in 2019 with Kärpät’s U20 club.

Every scouting report you read on Blomqvist complement his athleticism, fluidity and compete level. You never see him give up on a save. Furthermore, Penguins scouts love his play-reading ability, too.

They’re already playing hockey again in Europe, believe it or not, and Blomqvist has played very well so far this season in Finland’s top league. In two games for Oulun Kärpät, Blomqvist went 2-0 with a .914 save percentage while allowing just three goals. You have to wonder if his impressive showings in September influenced Pittsburgh’s scouting staff at all to pull the trigger on him once it was on the clock.

The Penguins weren’t satisfied with drafting just one goalie on Tuesday. They followed up the Blomqvist pick by snagging Swedish netminder Calle Clang at 77th overall.

Picking up goalies was clearly a point of emphasis for the Penguins organization coming into this draft. After trading Matt Murray, it was pretty much a necessity. Murray’s departure left only four goaltenders under contract with the Penguins: Tristan Jarry, Casey DeSmith, Emil Larmi and Alex D’Orio. In the case of DeSmith and Larmi, they only have one year left on their contacts, as well. Of course, free agency hasn’t started yet, and the Penguins will certainly be active in that regard to bolster their crease for 2020-21, but the pipeline was pretty dry in terms of goaltending depth. Not anymore.

And on the topic of Calle Clang, he’s another prospect adept at reading the play and anticipating the attack like Blomqvist. Clang is a hair taller and plays a much more aggressive style than Blomqvist. As a backup for Sweden at the last Hlinka-Gretzky Cup, he performed exceptionally with 51 saves on 54 shots faced, and was the goalie of record in the bronze medal-winning game. He manned the pipes for a lackluster Rögle junior team during the season, but still managed a .913 save percentage and 2.64 goals against average.

• In the fourth round (108th overall), the Penguins took their first skater of this draft. Lukáš Švejkovský was the selection, a right winger from the Western Hockey League. He split last season between the Vancouver Giants and Medicine Hat Tigers, and he recorded 38 points (18G-20A) in 52 games. Švejkovský is a fleet-footed forward who plays a slippery game and brings some energy, too.

• Not content with making one trade today, Jim Rutherford shipped Pittsburgh’s fifth-round pick (139th overall) to the Colorado Avalanche in exchange for a later fifth-round selection (149th) and a seventh rounder (211th).

• With that first pick they nabbed from Colorado, the Penguins picked Latvian winger Raivis Ansons. He’s a big, heavy body who plays a diligent defensive game. Really good penalty killer. He’s not the most skilled prospect with the puck, but he pulls off simple, effective plays. He creates problems with the way he crashes the crease.

• In round six, the Penguins chose forward Chase Yoder at 170th overall. He played primarily in the bottom six for the United States National Team Development Program and demonstrates deft hands, very good feet, and a consistent, infectious compete level. Scouting reports suggest he’s occasionally guilty of trying to do too much on offense, but hey, he’s never going to short-change you on effort. Yoder is committed to Providence College.

• Pittsburgh’s day ended by trading the second of its two picks acquired earlier from Colorado. Rutherford shipped the pick in the 211th slot to the Washington Capitals for a seventh-rounder in 2021.

Might as well talk about the prospect the Penguins received in return for Murray. Jonathan Gruden was a fourth round pick (95th overall) by Ottawa in 2018. He played at the prestigious United States National Team Development Program in his draft year, played one season at Miami University and then left to play for illustrious London Knights of the Ontario Hockey League. Sixty-six points (30G-36A) this most recent pandemic-shortened season ain’t too shabby.

I remembered him being a hard-working and hard-nosed player, but I had to go back to my draft notes from two years ago for a refresher on Gruden’s game. This is what I had:

“Straight-line, blue collar player with good puckhandling ability. He’s good in all three zones and competes in the trenches every night. Won’t be confused with the fastest player in his draft class, but has deceptive speed to go with his persistent motor. Scores 95% of his goals close to the crease.”

At 20-years-old, Gruden will be eligible to join the Wilkes-Barre/Scranton Penguins this upcoming season.