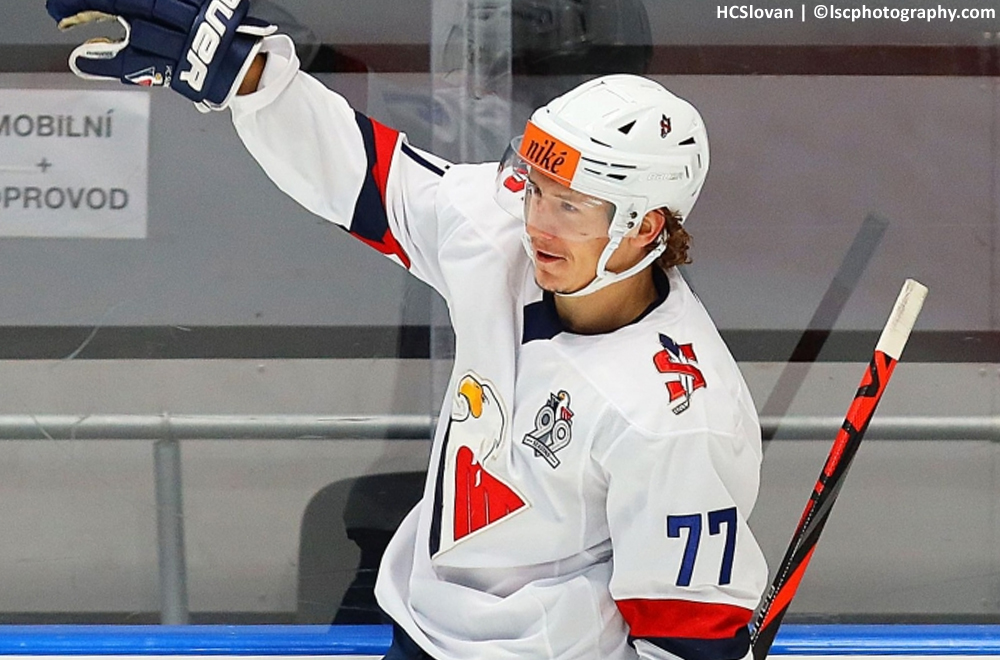 Though the NHL and AHL both remain out of action for the time being, several prospects in the Penguins organization are currently playing either overseas or north of the border. Wilkes-Barre/Scranton broadcaster Nick Hart will occasionally check in on these Penguins prospects and highlight their respective performances.

WILKES-BARRE, Pa. – Cam Lee is Canadian. Born in Ferguson’s Cove, Nova Scotia, to be precise. He attended prep school in New York. He played junior hockey in Wisconsin. He went to college in Michigan. When he signed with the Pittsburgh Penguins in March, he probably figured he would start his pro hockey career in Pennsylvania. Instead, Cam Lee started life as a pro athlete in Europe. In Bratislava, Slovakia.

Despite the unexpected detour in his already well-traveled journey, the 23-year-old defenseman is performing quite well with his new team. Skating with Slovan Bratislava, Lee has an impressive eight points (2G-6A) in eight games. He also just scored the first goal of his pro career, a tally that turned out to be the game-winner for Bratislava and the first of two goals on the night (and the goalie gets comically upset at his team after the second one).

He’s producing in bunches lately. Five days before his two-goal outing, Lee had a three-assist game. Oh, and Bratislava is likely thrilled about Lee’s arrival, too. Not only is his point-per-game pace as a defenseman inspiring, but Bratislava is 7-1-0 in the eight games since Lee first suited up in Slovakia.

Lee was loaned to Slovan by Pittsburgh towards the end of October. It is not a full-season loan, so when hockey starts again in the Keystone State, he will likely make his return and get back on the track he expected for himself. Until then, he can keep turning heads with his impressive work in Slovakia.

• Another college free agent signed last spring also finds himself in an unlikely landing spot. That young man is Drew O’Connor, and his temporary home is Norway. Playing for Manglerud in the GET-ligaen, the forward from Dartmouth already has two goals and two assists for four points in three games.

• As COVID-19 cases spiked in central Europe, the Czech Extraliga went on a temporary hiatus early in its season to help prevent the spread. This blocked Radim Zohorna from building upon his five points in his first four games, but play has since resumed for BK Mladá Boleslav and the rest of the Extraliga. And Zohorna’s still cooking. After scoring his sixth goal of the season as [art of a three-point performance yesterday, the big-bodied power forward is up to 13 points through 12 contests.

• Kasper Björkqvist, the subject of our first Nick’s Notebook prospect update, has cooled off a bit from his hot start in the Finnish Liiga, but he still has managed an even split of five goals and five assists for 10 points in 15 games with KooKoo. That’s good enough for the second-highest point total among rookies. Furthermore, you really like to see his average 18:22 minutes of ice time per game, also second among league rookies and No. 1 among rookie forwards.

• Also in the Liiga, Emil Larmi has taken over the starting role for HPK since joining the team in late October. Through eight games, he has a 2.50 goals against average, an .897 save percentage and a double-take-worthy 1-1-6 record. He has lost in overtime or a shootout in six of his eight crease appearances. Remember, through his first eight AHL games last season, he has a record of 2-2-4.

Somebody please score an overtime goal for Emil Larmi.

• Larmi’s HPK teammate, Valtteri Puustinen, is having a very strong season as a 21-year-old. Puustinen is producing at a point-per-game clip, collecting 12 points (4G-8A) in 11 games. Unfortunately, he did miss some time in as a result of an imposed quarantine following HPK  family members who tested positive for COVID-19, but that layoff hasn’t slowed Puustinen down. He’s still second on the team in points despite missing six games.

Puustinen is not expected to join Wilkes-Barre/Scranton once hockey in the United States resumes, but his performance merits keeping a close eye on him throughout the season.

• Niclas Almari also has been loaned to his native Finland. The defenseman skated in three games for the Lahti Pelicans, but remains sidelined with an injury.

• Jan Drozg is wreaking havoc in his native Slovenia, rattling off 10 points (4G-6A) despite playing only four games.

Drozg put an exclamation mark on his latest two-goal, three-point outing with HK SŽ Olimpija by tucking a lovely between-the-legs marker. Because why not?

• Jesper Lindgren, a defenseman the Penguins acquired from Toronto as part of the Kasperi Kapanen trade, hasn’t scored a goal yet through his first 14 games. However, he has earned nine assists in that time, giving him second-highest point-total on his team, MODO Örnsköldsvik. That’s also tied for the fourth-most assists among all D-men in the HockeyAllsvenskan, Sweden’s second league.