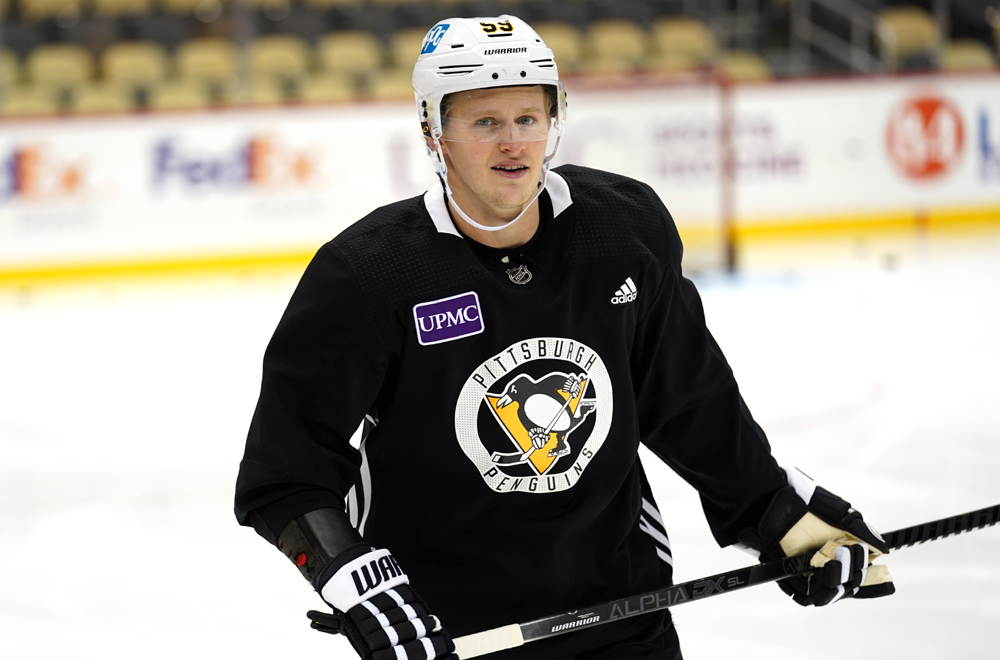 WILKES-BARRE, Pa. – When Jake Guentzel stepped in front of the camera to answer questions in his first virtual media availability since the start of Pittsburgh Penguins training camp, his first response led to him opening up about how confident he feels ahead of the 2020-21 season. Shortly thereafter, he demonstrated that confidence.

Reporter: “It looked like you had a chance going in alone, a semi-breakaway against Tristan. What’d you see?”

With that deadpan, throwaway yet infectiously swaggerous response, Guentzel unwittingly proved that his previous answer about confidence was not a canned answer. Jake Guentzel appears to have his groove back, and that’s excellent news for the Penguins.

“The sky’s the limit for Jake,” said Penguins head coach Mike Sullivan. “He’s established himself as one of the elite goal scorers in the league over the past couple of years… What I really admire about Jake is his hunger and his determination to get better. I know he’s not satisfied with where he’s at. He wants to improve every aspect of his game, and he’s willing to put the work in to do it.”

Coming off of shoulder surgery as Pittsburgh entered the Toronto bubble for the Stanley Cup Playoffs, Guentzel produced three points in the team’s first three postseason games before he and the rest of the club were shut-out and eliminated in the fourth contest. The numbers were in line with how Guentzel performed in the past, but many pundits were left wondering if the former Wilkes-Barre/Scranton star was truly 100 percent.

Guentzel refused to admit to playing with any sort of mental or physical hindrances in that series against the Montréal Canadiens, but he does feel much more comfortable today than he did during the mid-summer restart.

“With the extra recovery time, I feel stronger and I feel more confident,” Guentzel said. “I don’t really think about it anymore. It’s just a confidence thing, and how long it’s been since [surgery], I’m ready to go.”

Skating alongside Sidney Crosby and Evan Rodrigues in the first two days of training camp, he’s already pulled off a number of impressive plays in practice and the team’s organized scrimmage. Those plays have been evident to his new linemate.

“I think he has an underrated shot and an underrated ability to get it off his stick quickly,” Rodrigues said. “Something that I also think goes unnoticed is his ability to pass the puck, too. He’s just overall a great player.

“You put him and Sid out there together, and they can make a lot of magic happen.”

OTHER NOTES FROM DAY 2

• Like Kasperi Kapanen, newly acquired forward Colton Sceviour missed the first day of Penguins training camp. Unlike Kapanen, Sceviour joined his new club on the ice Tuesday. Sceviour was skating on a line with Teddy Blueger and Chris Tanev at practice after being excused from Day 1 to be with his wife for the birth of their child.

• Sullivan mentioned in the past that he plans on putting an emphasis on five-on-five play and scrimmages during training camp. The team held their first of those scrimmages today. It ended in a 3-0 triumph for Team Gold over Team Black. Shutout victory for Tristan Jarry. Goals came courtesy of Jason Zucker, Sceviour and Bryan Rust.

• While the results of the scrimmage mean bupkis in the grand scheme of things, perhaps the shutout is a good omen for Jarry. Coming off of an All-Star season, Jarry will carry the weight of being a full-time starter in the NHL for the first time this season.

Sullivan, who oversaw the start of Jarry’s pro career in Wilkes-Barre/Scranton, had these kind words to say about the goaltender: “Tristan has really matured both off the ice and on the ice in establishing the necessary work habits that give him the opportunity to have success when the game occurs. He’s a very competitive guy. He wants the net.”

• Tom Kostopoulos served as one of the refs for today’s scrimmage. I wonder if he enjoyed the role reversal after spending so many years in the ears of officials as Wilkes-Barre/Scranton’s captain.