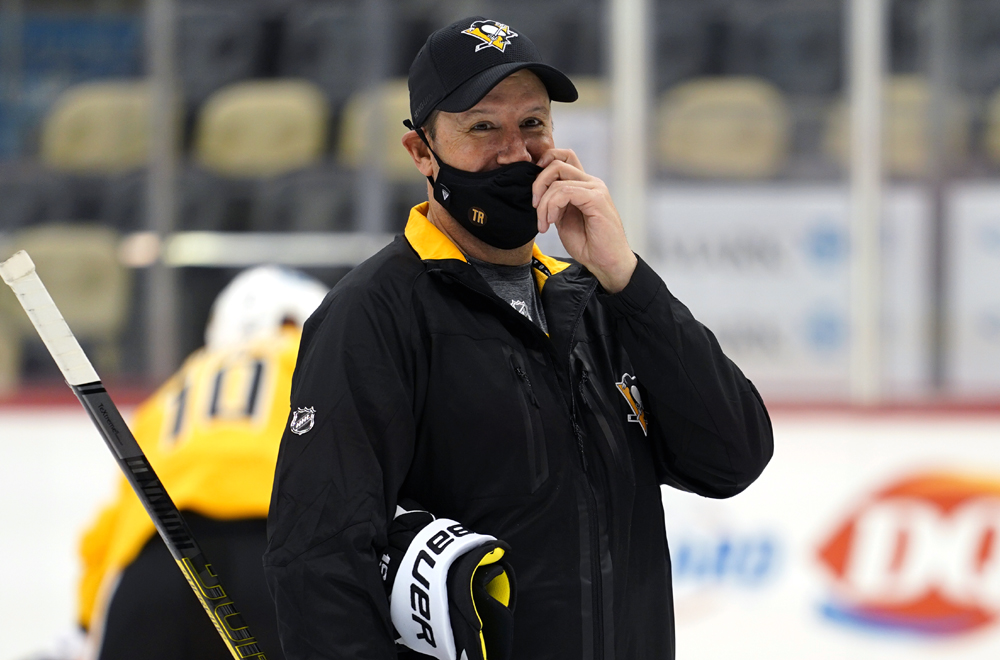 Often times, the first day of NHL training camp is like the first day of school after summer vacation. Everyone is excited to see each other again, to talk about how they spent their summer, to compare schedules. “Dude, you have Philadelphia at 5:30 on Jan. 13? No way, so do I!” *high five*

For reasons I’m sure you can all easily deduce, the reunions were a bit more muted than usual when the Pittsburgh Penguins officially started their training camp on Monday morning. Masks conceal delighted greetings, social distancing prevents warm embraces, and there’s less time to get to know the new kids. However, despite the unique nature of this training camp, everyone was extremely excited for the return of assistant coach Todd Reirden.

Reirden, who spent the last two seasons as the head coach of the Washington Capitals, is back with the Penguins as an assistant after being hired by the club in September. The former Wilkes-Barre/Scranton bench boss swiftly went to work in practice by enthusiastically leading warm-up drills as well as managing a dress rehearsal of the team’s power play. Reirden was given a warm reception by players, particularly defenseman Kris Letang.

“Me and Todd have a special relationship,” Letang said. “He’s a man and a coach that took me under his wing and spent countless hours working on my game. Obviously, at that age, I was learning so many things.

“It was fun to be with him. He has the same excitement to work again, even if I’m an older guy now.”

Sidney Crosby, also excited to be reunited with Reirden, recalled the potency of the Penguins’ power play when Reirden was at the helm several seasons ago. When he served as an assistant to fellow Wilkes-Barre/Scranton alum Dan Bylsma, Reirden’s man advantage unit had the third-best conversion rate in the league from 2010-14 (20.3%), plus his power play placed first the NHL in 2013-14 (23.4%) before he moved on to Washington.

“Our work habits were good our work ethic was good, and everyone contributed,” Crosby said of Reirden’s power play. “You play to your strengths. That’s the key to any power play. [Reirden] preaches a lot of those things.”

Crosby noted Reirden’s affinity for “movement” – both of the puck and foot variety – on the power play the last time he was running things in Pittsburgh. It sounds like that approach will be deployed again with Reirden holding the reins, but that doesn’t mean his tactics are that of an unflinching dictator. Both Crosby and Letang made a point to compliment Reirden’s communication and flexibility.

“One of [Reirden’s] strengths and qualities is that he’s a great listener,” Letang said. “He likes to sit down with guys and brainstorm some ideas. I think there’s going to be a lot of different looks and try and put guys in situations where they can be successful. He’s not afraid of trying new things and changing it up within the game. He’s not going to try the same thing all the time.”

Improving the man advantage will be a big storyline for the Penguins throughout this shortened NHL season, as teams are looking for any window to gain an advantage in what promises to be an ultra-competitive East Division. Pittsburgh placed right in the middle of the pack last season, 16th overall, 19.9 percent success rate.

The start of Penguins training camp may not have had the same first-day-of-school comradery that players are used to experiencing, but the return of Reirden definitely helped lift their spirits.

“It’s been a long time since we had a practice altogether at the same time,” Letang said. “There was a lot of energy, a lot of excitement. Guys were smiling, having fun out there. It was fun.”

OTHER NOTES FROM DAY 1

• Penguins head coach Mike Sullivan noted that offseason acquisitions Kasperi Kapanen and Colton Sceviour were absent from the first day of training camp. Sceviour was excused to be with his wife for the birth of their child. Kapanen was unable to skate due to ongoing visa issues. With the immigration process further complicated by the ongoing COVID-19 pandemic, Kapanen’s arrival in Pittsburgh has been delayed.

• When asked about the probability of some young, entry-level contract players making the team’s roster out of training camp, Sullivan was quick to point out that “anybody” who was invited to camp has a shot to make the team. “My approach has always been… we’re looking for players that are going to help the Pittsburgh Penguins win. So if guys play well, and their body of work suggests they deserve it, those decisions will be made.” Encouraging words for some youngsters who spent last year in Wilkes-Barre/Scranton, such as Anthony Angello and Pierre-Olivier Joseph.

• Chris Tanev REALLY grew out his hair. I mean REALLY.