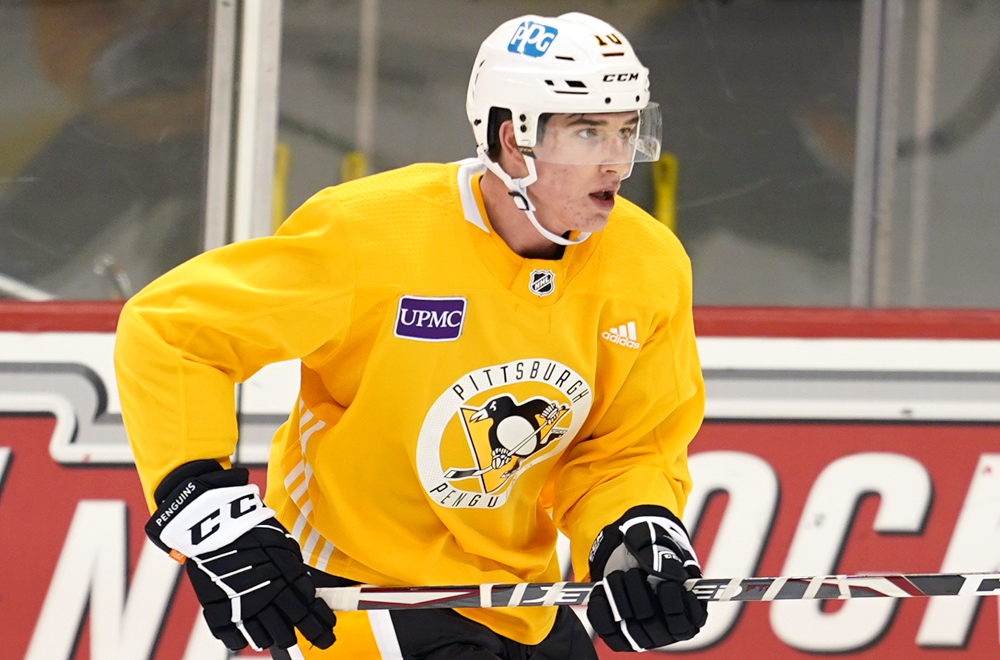 WILKES-BARRE, Pa. – Sidney Crosby stepped into the slot and received a pass from the left-side wall. Open for a brief moment, the Pittsburgh Penguins captain had a small window to score using the hottest stick in training camp on Friday. That’s exactly what he did, except… it wasn’t his stick.

Crosby snapped his twig on the preceding face-off at the start of a simulated power-play and then raced to the bench and took a replacement stick from the nearest left-handed teammate. That was ultimately Drew O’Connor’s stick, and Crosby lit the lamp mere seconds later. That meant O’Connor’s lumber was responsible for a power-play goal, an even strength marker and a shorthanded breakaway chance during the course of the Penguins’ Friday scrimmage (he earned the latter two for himself).

Friday was an impressive day for O’Connor, a powerful, six-foot-three rookie trying to leave an impression on Pittsburgh’s coaching staff. An undrafted free agent, O’Connor was signed to an entry-level deal by the Penguins at the end of his sophomore season at Dartmouth College in March of 2019. Expected to join Wilkes-Barre/Scranton and begin his pro career on an amateur tryout agreement, he never made to the AHL because of- well, you know.

Fast-forward to today, and despite not playing an organized game in over 10 months, O’Connor has worked his way into the conversation to make Pittsburgh’s roster.

“I know our hockey ops department was really excited to sign him and make him part of our organization,” said Penguins head coach Mike Sullivan. “These guys rave about the progress he made throughout his tenure at Dartmouth and the possibility of him becoming a real solid pro.”

O’Connor’s swift development at the college level is apparent by looking at the statistics. After only scoring 13 goals in his last season of junior hockey as a 20-year-old, he potted 17 tallies in his freshman season at Dartmouth. One year later, he scored 21 goals for the Big Green, a total that led the entire ECAC and ranked fifth in the country. O’Connor also racked up six goals and 10 points during a brief seven-game stint in Norway prior to Penguins training camp, and based on his two-goal outing on Friday, it seems his scoring touch hasn’t diminished since he left campus.

But despite the impressive showing he’s had so far against NHL competition, does O’Connor really stand a chance at making Pittsburgh’s roster for opening day? It will be a tight race, considering general manager Jim Rutherford went out and acquired several forwards to further solidify the team’s bottom-six, but Sullivan was sure to point out that no one’s spot in the lineup is predetermined. The Penguins’ bench boss feels that even the young guns at training camp can seize a stall in the locker room if their play is NHL caliber.

“I think we have the track record to show that we believe in that,” Sullivan said. “A guy like John Marino is an example of that last year. Coming out of training camp, we were impressed with the camp that he had and he earned his way into the lineup, and Jim had to make some moves to facilitate that process.”

Whether O’Connor continues to shine in scrimmages and locks down a spot in Pittsburgh, slots in on the taxi squad or winds up playing big minutes for Wilkes-Barre/Scranton at the start of the season, the Penguins are thrilled with the potential they unearthed in another undrafted free agent. He may be realizing that potential sooner than anyone expected, too.

“We’ll be keeping a close eye on him throughout camp,” Sullivan slyly said.

OTHER NOTES FROM DAY 5

• The team had a scheduled day off on Thursday, so nothing new to report from Day 4.

• So, technically the simulated special teams work at the start of the scrimmage doesn’t count towards the overall score of the game (That’s okay Sid, we still got you.) The final score of the five-on-five portion of the scrimmage was 2-1 in favor of Team Gold. Evan Rodrigues scored the lone goal for Team Black, while O’Connor opened the scoring for the gold side, and Jared McCann finished things off with a gorgeous between-the-legs goal worth seeing.

• The Dallas Stars announced that their practice facilities have been shut down following multiple positive COVID-19 test results, and several other teams had their practice plans interrupted due to COVID-related protocols. Asked about the possibility of the virus affecting the season now that the NHL is outside of the bubble, Bryan Rust had this to say: “It’s crazy times we’re living in… There’s definitely times throughout the year where things are going to be affected by it. We’ve got to expect that to happen, and we’ll have to take things as they come.”

• Much has been made of how the Penguins can improve their power play this season, but perhaps the success of the penalty kill has been overlooked. Pittsburgh had consistently one of the best penalty kills in the league last year. Teddy Blueger, as Wilkes-Barre/Scranton fans know, was an integral piece of that potent P.K., and while the coaching staff may have been shuffled a bit, Blueger doesn’t expect them to tinker with a winner formula. “Philosophy might different little bit, but overall, it comes down to execution,” Blueger said. “It’s about outworking the power play. We have some great personnel and a lot of guys who are experienced and proven that they’re good at (penalty killing).”