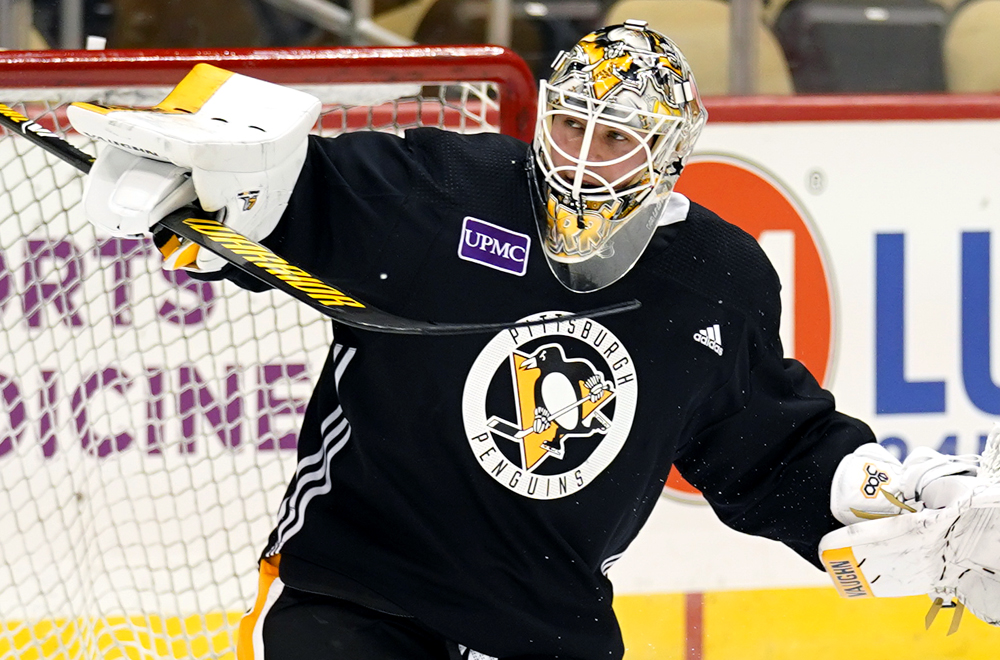 WILKES-BARRE, Pa. – The old cliché goes “goaltending is the most important position in hockey”.

It’s also the most unpredictable.

With the NHL 2020-21 season to take place with a shortened schedule with teams exclusively playing division opponents, the most important position in hockey is bound to be more important and perhaps more unpredictable.

The Pittsburgh Penguins may be entering this condensed season with a new starting goaltender, but not an unfamiliar tandem. To combat the potential uncertainty, they hope the previous results of Tristan Jarry and Casey DeSmith indicate future success.

“It’s nice that I’m with Tristan this year,” DeSmith said. “We have an experience with in kind of a similar scenario a couple years ago together. He’s a good guy to go into war with.”

Four seasons ago, Jarry and DeSmith shared the net as a pair for the Wilkes-Barre/Scranton Penguins. They were so solid as a duo that they won the AHL’s Harry “Hap” Holmes Memorial Award, given annually to the goalie(s) with the lowest goals against average at the end of the regular season.

Furthermore, Jarry and DeSmith backstopped Wilkes-Barre/Scranton to the league’s best record in 2016-17.

This year, Jarry is expected to handle the lion’s share of the starts for Pittsburgh as the starter, while DeSmith will slot comfortably behind as the backup.

Because they have an existing rapport from their successful stint in the AHL, DeSmith believes they know how to bring out the best in one another.

“Now that we’re finally together again, I think that comfortability level is huge,” he said. “We’ve learned how to support one another. We’ve learned what the other likes, what the other doesn’t like as far as taking the net, pre-game stuff, warm-ups. Stuff like that. We don’t have to learn anything else about the other guy.”

They don’t have to learn anything about their coach, either.

Mike Buckley was the Penguins goaltending development coach during Jarry and DeSmith’s Hap Holmes-winning campaign, and he was mighty proud of what those two young goalies did at the time.

Now, Buckley is also in Pittsburgh as the team’s main goaltending coach, and his confidence in them as a tandem hasn’t wavered.

The NHL and the Pittsburgh Penguins kick off the 2020-21 season on Wednesday, Jan. 13. Once the puck drops, it will be a mad, teeth-gnashing dash to qualify for the Stanley Cup Playoffs.

Good goaltending will give teams the edge they so desperately want in that chase for the postseason. Pittsburgh is banking on earning that edge with the winning combination of Jarry and DeSmith.

• Pittsburgh finalized its 23-man roster and taxi squad on Monday. Anthony Angello and Pierre-Olivier Joseph are among those on the taxi squad.

Mike Sullivan did offer the possibility that as the season goes on, taxi squad players could be assigned to Wilkes-Barre/Scranton if they go too long without playing games. Similarly, excellent performance in the AHL could earn a player promotion to the taxi squad, as well.

• The taxi squad features two more goalies, Max Lagacé and Alex D’Orio, bringing to the total number of goalies in the Steel City to four. Would Sullivan consider introducing a third goalie to the regular rotation if Jarry or DeSmith needed a night off? “Not to this point,” he said.

• Much has been made of the Penguins’ newcomers this season, and for good reason. There’s plenty of them.

One of those new faces is Colton Sceviour. In his first media availability since he was acquired by Pittsburgh in August, Sceviour mentioned how impressed he was with his new team’s practice habits.

“I think one of the things I noticed right off the bat was the competitiveness in practices. It’s at a whole other level here. You can’t come in and float your way through a practice or through a drill. The guys don’t let you.”

• There was some news out of Wilkes-Barre on Monday morning, as the Penguins named Kevin Porter the team’s new assistant coach.  Porter spent parts of two seasons playing in NEPA, and was a member of Pittsburgh’s Stanley Cup winning squad in 2016.