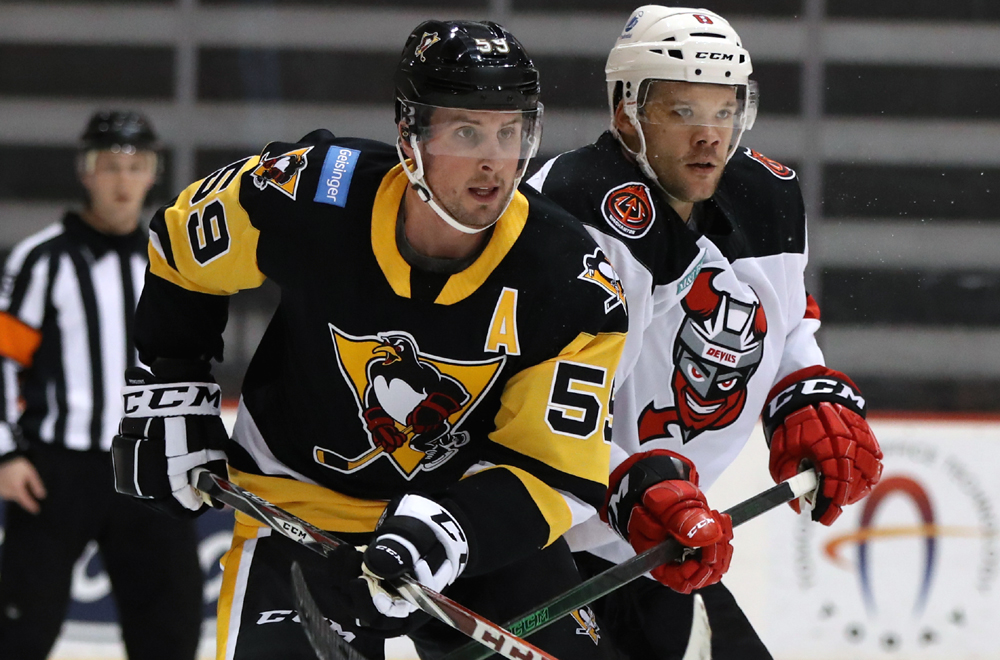 NEWARK, N.J. – The Wilkes-Barre/Scranton Penguins emerged victorious in their first preseason game by a score of 5-1, downing the Binghamton Devils at RWJBarnabas Heath Hockey House on Sunday.

Five different Penguins scored throughout the game, as head coach J.D. Forrest saw his team steadily improve over the course of its first organized game in 326 days.

Tim Schaller, who is at Penguins training camp on a professional tryout agreement, was the first to find the back of the net. Taking advantage of a turnover forced by Nick Schilkey, Schaller snapped the puck past Devils goalie Evan Cormier at 2:41 of the first period.

Wilkes-Barre/Scranton only generated four shots in the first period, but they upped their offensive assault in the second period with 11 shots. One of those bids, a heavy slap shot by Josh Maniscalco, tickled the twine to make it 2-0, Penguins, at 2:43 of the middle frame.

The Penguins improved their lead to 3-0 thanks to another opportunity created through their heavy forecheck. Jonathan Gruden and Chase Berger worked to pry the puck away from the Devils defense down low, resulting in Zack Nastasiuk stuffing the puck past Cormier 11:47 into the third period. However, Binghamton responded mere seconds later with Reilly Walsh putting his team on the board.

The Devils continued to press the Penguins after Walsh’s goal, but Emil Larmi held firm between the pipes. Larmi finished the night having made 21 saves for the win.

With the goalie pulled and extra attacker on the ice, Binghamton’s attempt to cut into Wilkes-Barre/Scranton’s lead backfired. Schaller had a look at the empty net, but his try kicked off the post right to teammate Jordy Bellerive, who was happy to slam the puck across the line with 2:22 left in regulation.

Not satisfied with a 4-1 lead, Gruden beat Cormier through the five-hole 27 seconds after Bellerive’s empty-netter.

Cormier recorded 22 saves for Binghamton in the preseason loss.

The Penguins were unsuccessful on three power-play attempts, but they were able to go four-for-four on the penalty kill, including a two-man advantage for the Devils in the first period.

PENGUINS FALL TO THUNDERBIRDS IN SHOOTOUT, 4-3