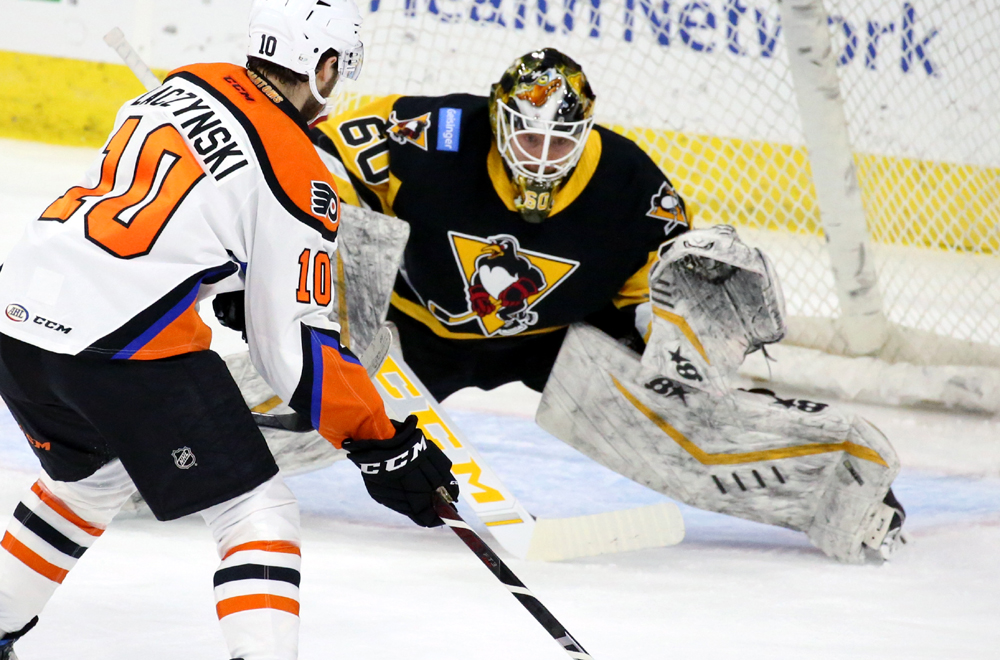 ALLENTOWN, Pa. – The Wilkes-Barre/Scranton Penguins fell in their final tune-up before the 2020-21 regular season, dropping a 2-0 decision to the Lehigh Valley Phantoms at PPL Center on Thursday night.

Penguins goaltender Emil Larmi put forth a strong performance in net, stopping 29 of the 31 shots he faced. However, his teammates couldn’t get anything past Felix Sandström at the other side of the ice.

Larmi was locked in from the get-go, turning aside 10 shots in the first period. Some of Lehigh Valley’s best opportunities in the opening frame came during a Penguins power play, but Larmi made a series of acrobatic saves to keep the Phantoms off the board.

Lehigh Valley finally solved Wilkes-Barre/Scranton’s netminder at 8:45 of the second period. Larmi initially denied a shot from the slot on an odd-man rush by Chris Bigras, but Bigras located his own rebound and tucked it in. Tyler Wotherspoon notched the Phantom’s second goal with a seeing-eye shot through traffic midway through the third and final frame of regulation.

Sandström posted 21 saves for the shutout.

Wilkes-Barre/Scranton was unsuccessful on its four power-play opportunities, but did deny all five of Lehigh Valley’s man advantages, including a minute-long five-on-three in the third period. That improved the team’s penalty kill to a perfect nine-for-nine in the preseason.

The Penguins’ next game is their 2020-21 season opener. Wilkes-Barre/Scranton will take on the Binghamton Devils on Saturday, Feb. 6 at Mohegan Sun Arena at Casey Plaza. Puck drop between the Penguins and Devils is scheduled for 5:00 p.m.