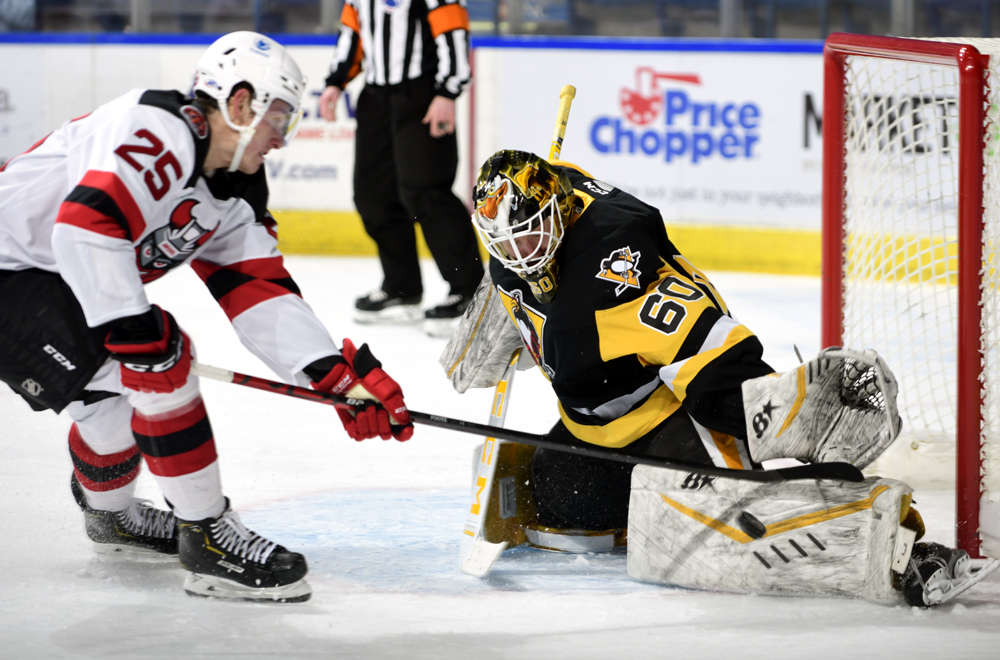 WILKES-BARRE, Pa. – The Wilkes-Barre/Scranton Penguins lost their 2020-21 season opener in overtime, dropping a 4-3 decision to the Binghamton Devils at Mohegan Sun Arena at Casey Plaza on Monday night.

In the Penguins’ first regular season game since Mar. 11, 2020, the team responded to the long layoff by filling their opener with hard hits, heavy pressure and an exciting, back-and-forth contest. However, a third period outburst by the Devils carried over to the extra frame.

Both teams spent most of the first period trying to settle in and regain their form after the extended time off, but the Penguins eventually worked their way to earning the game’s first goal. A Jordy Bellerive shot was initially stopped by Devils goalie Even Cormier, but the rebound caromed off a Binghamton defenseman and back into the net at 14:28 of the first period.

Wilkes-Barre/Scranton held Binghamton without a shot for the first 12 minutes of the second period, but the Devils managed to even the score on a redirection by Nolan Foote at 13:35 of the frame. The Penguins responded quickly, with new captain Josh Currie delivering his first goal as a Penguin on the power-play.

Before the second period could end, Wilkes-Barre/Scranton extended its lead to 3-1, albeit in unorthodox fashion. During a delayed penalty against the Penguins, Cormier left his net to get an extra attacker on the ice for Binghamton.

The Devils’ Danick Martel pulled his squad within one 4:20 into the third period. Martel struck the post about five and a half minutes later, but the rebound went right to the stick of Ryan Schmelzer who slammed it in and tied the game, 3-3.

Penguins goalie Emil Larmi tied his career best with 30 saves during the loss. Cormier finished the night having made 20 stops.

The Penguins’ next game is on Thursday, Feb. 11 against their bitter rival, the Hershey Bears. Puck drop between the Penguins and Bears is scheduled for 5:00 p.m. at Mohegan Sun Arena at Casey Plaza.