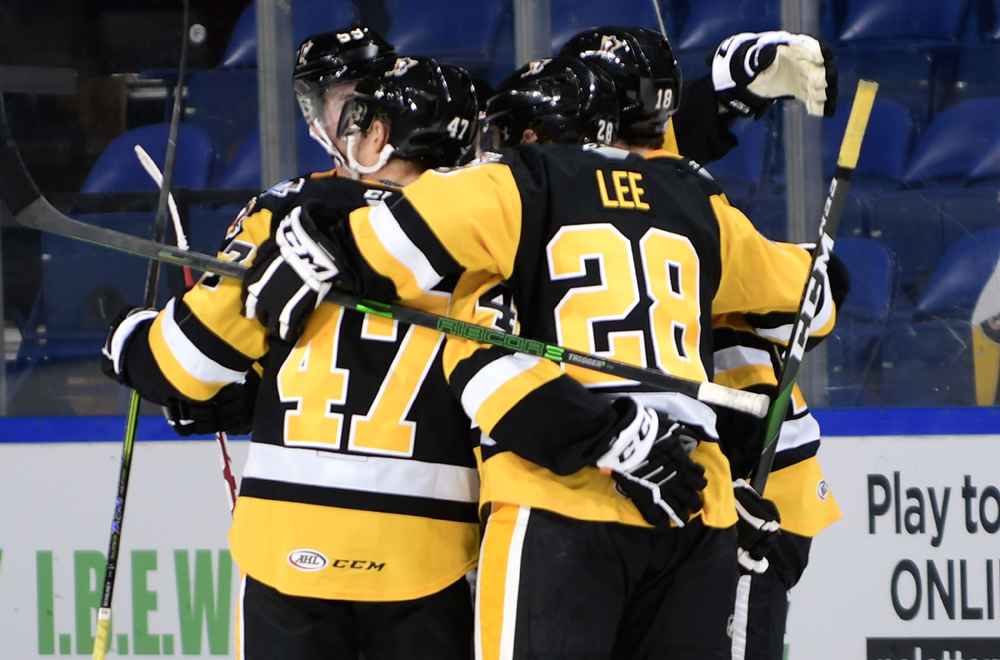 Monday, Feb. 8 – PENGUINS 3 vs. Binghamton 4 (OT)
Wilkes-Barre/Scranton kicked off its first game of the new season with an exciting, back-and-forth contest, but one in which the team ultimately fell short in overtime. Jordy Bellerive scored the Penguins’ first goal of the season late in the first period. Later, new captain Josh Currie and Justin Almeida tallied a pair of power-play goals in the middle frame, the latter of which was a rare empty-net own goal by the Devils. Binghamton rallied to erase a two-goal deficit in the third period and then won the game at 1:49 of OT. Despite the overtime loss, goaltender Emil Larmi turned in a shining performance, tying his AHL career high with 30 saves.

Thursday, Feb. 11 – PENGUINS vs. Hershey
The Penguins hope to earn their first win of the season by knocking off their bitter rival, the Hershey Bears. Hershey also lost its first game of the season in OT, falling 2-1 at the hands of the Lehigh Valley Phantoms. The Bears have brought back a number of stars from last year, including Matt Moulson, who scored five power-play goals against the Penguins in 2019-20. The Penguins are an impressive 27-11-0-3 at home against the Bears over the past seven seasons.

Saturday, Feb. 13 – PENGUINS at Syracuse
Wilkes-Barre/Scranton’s first road game of the season takes place in upstate New York, when they challenge the Syracuse Crunch at Upstate Medical University Arena. The Crunch are off to a hot start this season, putting six goals on the board in their season debut: a 6-1 triumph over the Utica Comets. First-year pro Gabriel Fortier scored twice in Syracuse’s season opener, already tying him for the league lead among rookies despite playing in only one game. The Penguins and Crunch split their season series last year at one win apiece.

– Wilkes-Barre/Scranton’s successfully killed all three of its opponent’s power plays on Monday, this after going a perfect nine-for-nine on the P.K. during the preseason.

– Dating back to last season, Jordy Bellerive has 10 goals in his last 19 games.

– Both of Justin Almeida’s AHL goals have come against the Binghamton Devils.

– Tim Schaller is the first player to wear number 59 for the Penguins since Róbert Döme in the team’s inaugural season (1999-2000).