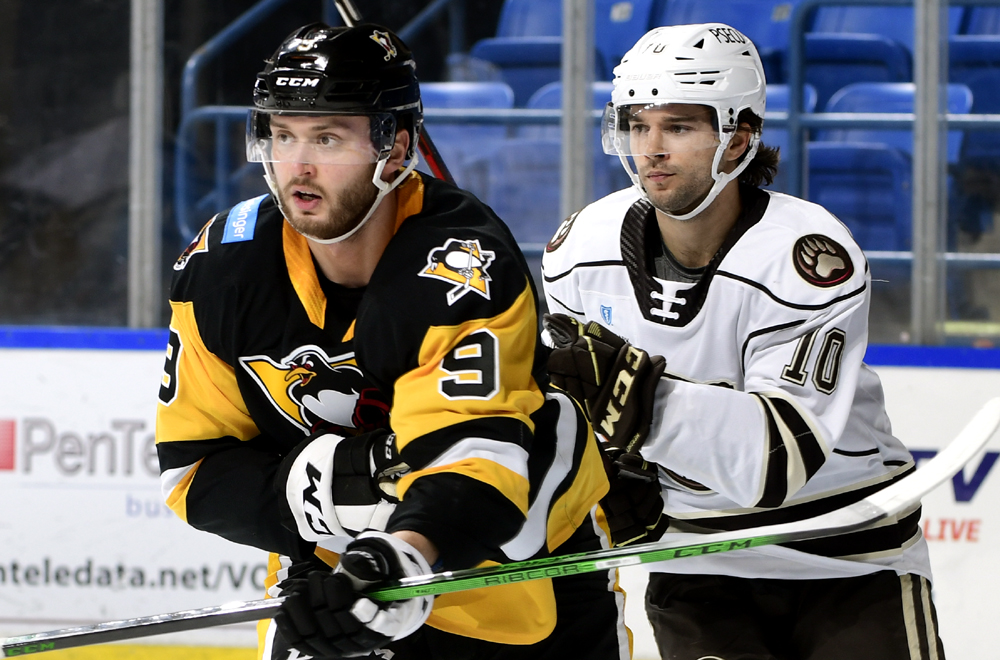 WILKES-BARRE, Pa. – The Wilkes-Barre/Scranton Penguins lost a close contest to the Hershey Bears, 3-2, at Mohegan Sun Arena at Casey Plaza on Thursday night.

The two bitter, in-state rivals traded the lead at different times in the night, but Hershey’s power play gave it the edge by the end of regulation.

The Bears were off to a fast start when Matt Moulson scored the game’s first goal just 1:22 into the game. Hershey proceeded to pepper Wilkes-Barre/Scranton goalie Emil Larmi with shots throughout the opening frame, but Larmi held firm long enough for his teammates to tie the score.

Tim Schaller notched his first goal since joining the Penguins with a quick wrist shot on the rush that whizzed past Pheonix Copley, off the post and in at 16:24 of the first period.

Wilkes-Barre/Scranton earned a power-play goal early into the second stanza with Josh Currie doing the honors. Cam Lee chopped down a Bears clearing attempt out of mid-air and quickly shuttled the puck to Currie who delivered his second goal in as many games.

Hershey responded with a power-play goal of its own mere minutes later, as Mike Sgarbossa picked the corner and evened things up, 2-2.

The game remained at a stalemate through the second period and most of the third, as Larmi was responsible for a series a confident and dazzling saves. He ultimately recorded 33 stops on the night, establishing a new AHL career high.

The Bears finally cracked Larmi again with another man-advantage marker at 8:56 of the third period. After the Penguins goaltender made several saves, Connor McMichael slammed in a rebound and made it 3-2.

Copley stood tall in the face of a late Penguins surge and recorded 20 saves in the win.

The Penguins’ next game is Saturday, Feb. 13, when they hit the road for their first away game of the season and take on the Syracuse Crunch. Puck drop between the Penguins and Crunch is scheduled for 7:00 p.m. at Upstate Medical University Arena.

BEST GOALS OF THE SEASON (SO FAR) BRACKET