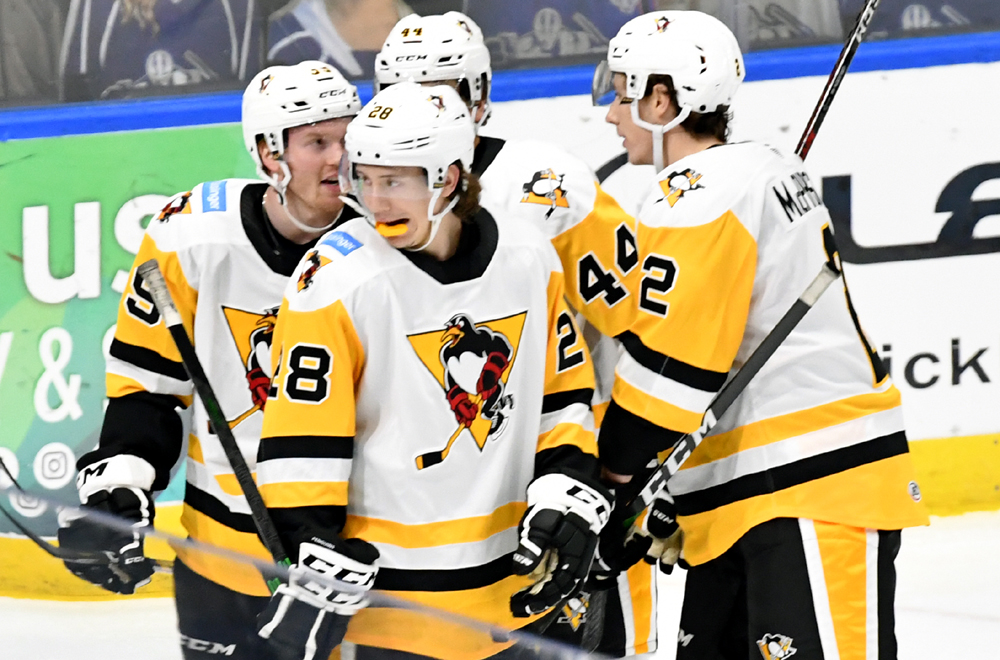 SYRACUSE, N.Y. – The Wilkes-Barre/Scranton Penguins outlasted the Syracuse Crunch and earned their first victory of the 2020-21 season, winning 5-4 at Upstate Medical University Arena on Saturday night.

The two teams engaged in an electrifying, dizzying offensive display in the third period, combining for five goals in four minutes and 35 seconds of game time. When the dust settled on the hectic final frame of regulation, Wilkes-Barre/Scranton (1-1-1-0) emerged on top.

The Penguins raced out to an early lead, scoring 46 seconds into the game when Jan Drozg knocked in a rebound.

Syracuse started to turn up the heat midway through the first period, generating a flurry of opportunities for Wilkes-Barre/Scranton goalie Emil Larmi to compete with. Larmi stopped Gabe Fortier on a point-blank chance from the slot and denied Alex Barré-Boulet on a breakaway shortly thereafter.

Barré-Boulet made good on his next chance, picking the corner at 15:31 of the first period, tying the game at one goal apiece.

Wilkes-Barre/Scranton assumed control of the contest in the second period, out-shooting Syracuse, 13-6, in the middle frame. The Penguins’ line of Jonathan Gruden, Chase Berger and Kyle Olson reaped the rewards of their team’s strong second-period performance, tallying twice. Berger converted a go-ahead goal created by Olson and Gruden’s forechecking pressure at 6:40 of the second period. With less than a minute left before the intermission, Berger won an offensive zone draw that resulted in Olson making it 3-1 a mere three seconds later.

Syracuse started the third period with a bang, lighting the lamp twice in less than two minutes. Grigori Denisenko pulled the Crunch within one at 2:10, and Gabe Fortier evened things up, 3-3, at 3:55.

Unfazed by Syracuse’s early-period onslaught, Will Reilly put the Penguins back in the lead 16 seconds later. However, Barré-Boulet’s second goal of the night put the score at 4-4 just 29 seconds after Reilly’s tally.

A power-play goal by Jordy Bellerive arrived at 6:40 of the third period, ending the avalanche of offense for both sides and rounding out the scoring on the night.

The win marked J.D. Forrest’s first as head coach of the Penguins, one of several milestones reached over the course of the game. Luke Stevens and Félix Robert both made their AHL debuts with the latter posting his first AHL point with an assist in the third period. Olson and Reilly both scored their first AHL goals, while Gruden also notched his first AHL point as part of a two-assist effort.

Larmi posted the win with 29 saves on 33 shots faced, while Samuel Montembeault was left with 23 saves on 28 shots in the loss.

The Penguins’ next game is next Saturday, Feb. 20, when they face-off against the Hershey Bears at Giant Center. Puck drop between the Penguins and Bears is scheduled for 7:00 p.m.