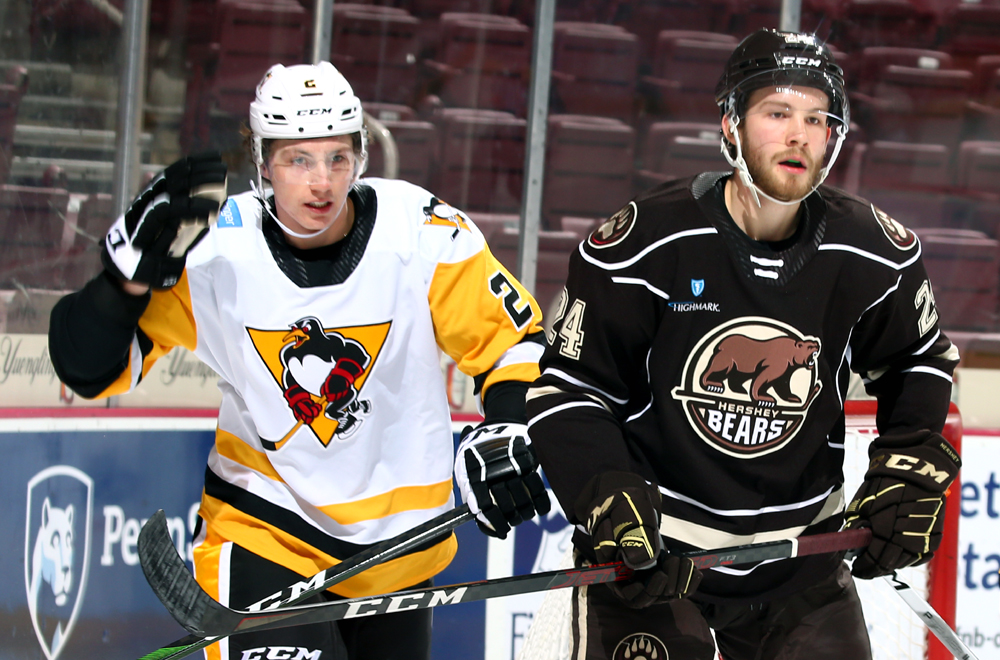 HERSHEY, Pa. – The Wilkes-Barre/Scranton Penguins fell victim to a scoring outburst by a first-round rookie and lost to the Hershey Bears, 3-1, on Saturday afternoon at Giant Center.

In a tight-knit contest that dropped Wilkes-Barre/Scranton to 1-2-1-0, Hershey’s Connor McMichael recorded all three of Hershey’s goals.

The Penguins struck first, using a power-play goal at 6:27 of the first period. Zach Nastasiuk tallied his first goal with his new team by redirecting a heavy slap shot by Jon Lizotte.

Hershey responded less than two minutes later with a man-advantage marker of its own, the first of McMichael’s three on the day. McMichael granted the Bears a 2-1 lead 79 seconds into the second period, taking advantage of a breakaway following a Penguins turnover at the offensive blueline.

Wilkes-Barre/Scranton turned up the heat in the final frame of regulation and limited Hershey to just four shots on goal. The latter half of the third period was filled with Penguins scoring opportunities that either just went wide or were stopped by Bears goalie Zach Fucale.

With time ticking down in regulation, the Penguins pulled their goalie in favor of an extra attacker. They quickly generated a prime look for Nick Schilkey, who rang his wrist shot off the post. Moments later, McMichael swept a loose puck from his own end to the Penguins’ empty net and completed the hat trick.

Fucale made 34 saves in the victory for Hershey, while Max Lagacé turned aside 27 of the 29 shots he faced in his Wilkes-Barre/Scranton debut.

The Penguins will look for revenge in their next game, when they face the Hershey Bears again on Wednesday, Feb. 24. Puck drop between the Penguins and Bears is scheduled for 5:00 p.m. at Mohegan Sun Arena at Casey Plaza. Wednesday’s contest between Wilkes-Barre/Scranton and Hershey is the first of six Penguins games to be broadcast on WQMY MyNetworkTV in addition to WILKNewsradio.com.