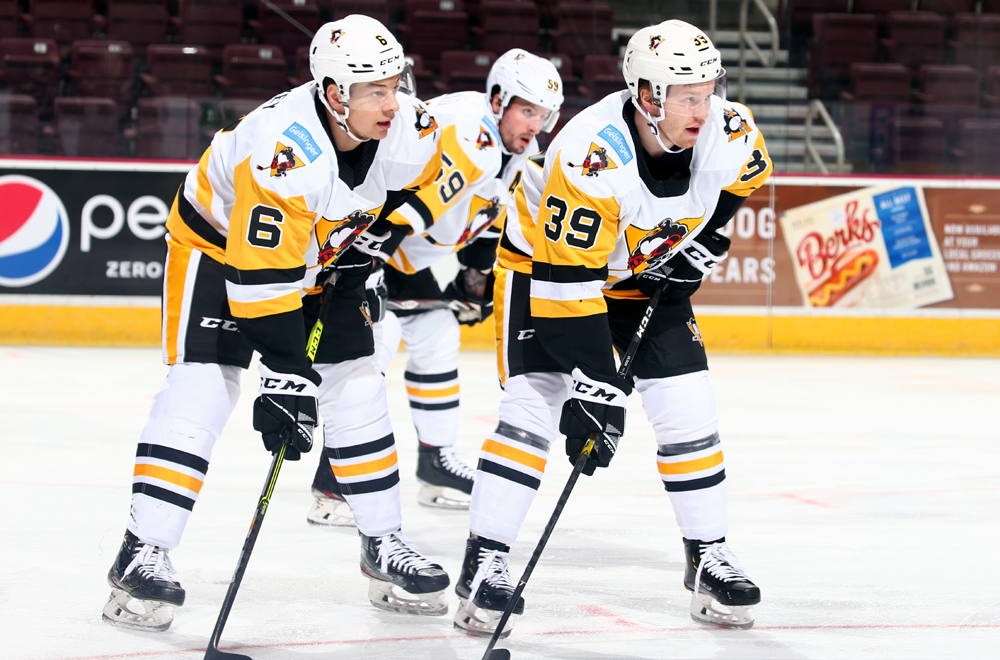 Penguins prepare for trio of games against Keystone State rivals

Saturday, Feb. 20 – PENGUINS 1 at Hershey 3
Wilkes-Barre/Scranton struck first, but couldn’t conjure a comeback when one of Hershey’s rookies went off for his first pro hat trick. Zach Nastasiuk’s first goal as a Penguin put his team on top, 1-0, on the power-play 6:27 into the first period. However, Hershey’s Connor McMichael responded with a man- advantage marker less than two minutes later. McMichael went on to add a goal early in the middle frame and an empty-netter in the third, accounting for all three of the Bears’ goals.

Wednesday, Feb. 24 – PENGUINS vs. Hershey
The Penguins get another crack at the Bears, looking for their first victory over their bitter rival this season. Both of the previous games for Wilkes-Barre/Scranton against Hershey came down to the wire, a 3-2 loss at home and then the most recent fall at Giant Center. All four of Connor McMichael’s goals in the AHL have come against Wilkes-Barre/Scranton, and all three of Hershey’s goals on the power play this season have been in games against the Penguins. Wilkes-Barre/Scranton has not allowed to power-play goal against to anyone other than Hershey.

Friday, Feb. 26 – PENGUINS vs. Lehigh Valley
The first regular season showdown between the Penguins and Phantoms will take place on Friday at Mohegan Sun Arena at Casey Plaza. Lehigh Valley is led by a cavalcade of young players, including 18-year-old Zayde Wisdom. Wisdom has tallied a pair of goals in back-to-back games.

Saturday, Feb. 27 – PENGUINS at Lehigh Valley
The second game of a home-and-home for the Penguins and Phantoms is slated for Saturday at PPL Center. Last season, the home team went 7-1-1-1 in Wilkes-Barre/Scranton and Lehigh Valley’s season series.

– Wilkes-Barre/Scranton has scored a power-play goal in each of its first four games. The Grand Rapids Griffins and Rochester Americans are the only other teams to do so this season.

– The Penguins franchise record for consecutive games with a power-play goal to start a season is six, established in 2007-08.

– Nick Schilkey is the only Penguins player to have recorded a point in each of the team’s four games thus far.

– Saturday’s game at Hershey marked the first game of the 2020-21 season for Anthony Angello, Frédérick Gaudreau and Max Lagacé. Angello had not played since Mar. 3, 2020, Lagacé since Mar. 7, Gaudreau since Mar. 11.