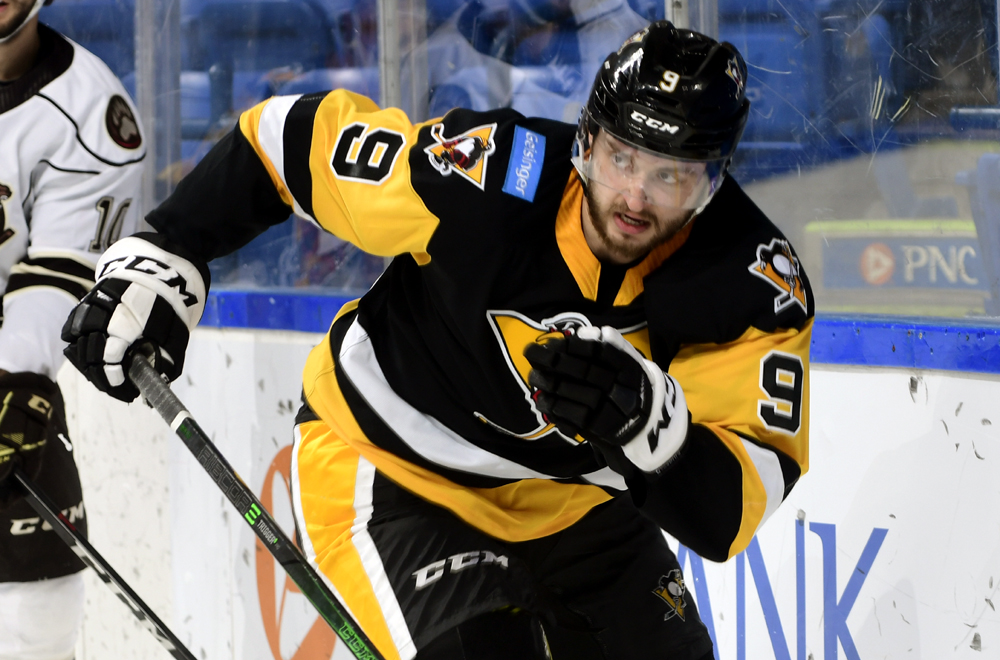 WILKES-BARRE, Pa. – A breakout performance by Radim Zohorna lifted the Wilkes-Barre/Scranton Penguins to a 4-2 triumph over the Hershey Bears on Wednesday night at Mohegan Sun Arena at Casey Plaza.

Zohorna tallied his first AHL goal as part of a three-point outing (2G-1A), as Wilkes-Barre/Scranton (2-2-1-0) earned its first win on home ice this season.

The first period featured an exchange of multiple power-play opportunities for both teams, none of which resulted in any scoring. Hershey’s Will Graber tucked the game’s first goal, detecting a loose puck in the Penguins’ crease at 18:26. However, Zohorna’s first of the night came with 12 seconds left in the period, tying the game at 1-1.

Anthony Angello granted Wilkes-Barre/Scranton its first lead of the night at 7:37 of the second period, forcing a rebound past Ilya Samsonov. Mike Sgarbossa answered for the Bears roughly two minutes later, evening the score, 2-2.

Midway through the second stanza, Zohorna struck again. Driving wide and then cutting across the crease to his forehand, the Czech forward slipped the puck underneath Samsonov for his second tally on the night.

Zohorna added an assist to his strong showing, earning the secondary helper on a Nick Schilkey short-side snipe at 3:58 of the third period that made it 4-2.

Penguins goaltender Max Lagacé held firm in net for the rest of regulation, maintaining his team’s two-goal lead by making 10 saves in the final period. Lagacé finished the night with 26 saves in the victory, while Samsonov posted 15 saves for Hershey.

Wilkes-Barre/Scranton’s next game is Friday, Feb. 26, when they take on their other Keystone State Rival, the Lehigh Valley Phantoms. Puck drop between the Penguins and Phantoms is scheduled for 5:00 p.m. at Mohegan Sun Arena at Casey Plaza. Friday’s tilt between Wilkes-Barre/Scranton and Lehigh Valley will be broadcast live locally on WQMY MyNetworkTV in addition to WILKNewsradio.com and will be shown on tape delay regionally on AT&T SportsNet at 9:00 p.m.