PENGUINS ROLL PAST PHANTOMS WITH 4-2 WIN 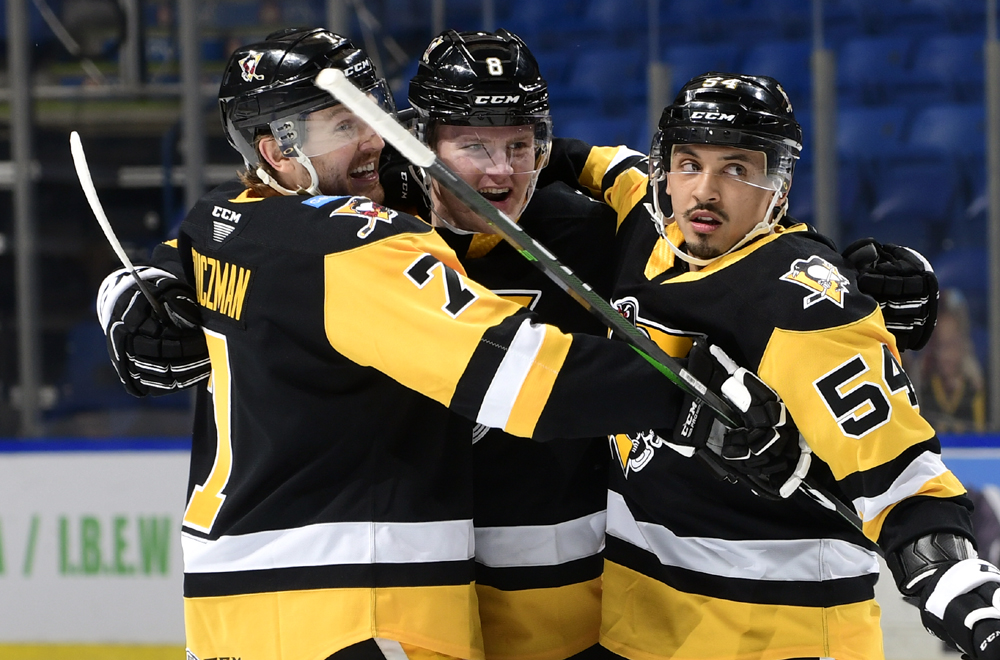 WILKES-BARRE, Pa. – The Wilkes-Barre/Scranton Penguins handed their in-state rival, the Lehigh Valley Phantoms, their first regulation loss of the season by nabbing a 4-2 win at Mohegan Sun Arena at Casey Plaza on Friday night.

The Penguins wasted little time getting on the scoresheet, using a wrist shot from Will Reilly to seize a 1-0 lead less than three minutes into the game.

Lizotte extended the Penguins’ lead to 2-0 at 4:14 of the second period, beating Zane McIntyre through his five-hole. However, Lehigh Valley answered in swift fashion. Twenty seconds later, Zayde Wisdom powered his way around the Penguins defense, pulled the puck to his backhand and roofed it over an out-stretched Max Lagacé.

Lizotte helped reestablish a two-goal lead for Wilkes-Barre/Scranton by setting up Jan Drozg at 12:35 of the middle frame. Lizotte’s drive was deftly deflected by Drozg just as the Slovenian forward skated between the hashmarks, and the puck slipped past McIntyre.

Wilkes-Barre/Scranton went up 4-1 thanks to Robert’s first AHL goal. At 3:14 of the third, Robert walked down the left wing wall and launched a perfectly placed shot over McIntyre’s shoulder and into the near-side corner.

The Phantoms provided yet another quick response with Max Willman scoring 43 seconds after the Robert goal, but they would come no closer to infringing upon the Penguins’ lead.

Lagacé finished the game with 23 saves, while McIntyre posted 20 stops in the loss.

Wilkes-Barre/Scranton and Lehigh Valley will go at it again tomorrow, Saturday, Feb. 27, this time facing off in the Phantoms’ barn. Game time is scheduled for 7:05 p.m. at PPL Center. The Penguins’ next home game Wednesday, Mar. 3, when they take on the Syracuse Crunch. Puck drop between the Penguins and Crunch is scheduled for 5:00 p.m. at Mohegan Sun Arena at Casey Plaza and will be broadcast live on WQMY MyNetworkTV and AT&T SportsNet Pittsburgh in addition to WILKNewsradio.com.