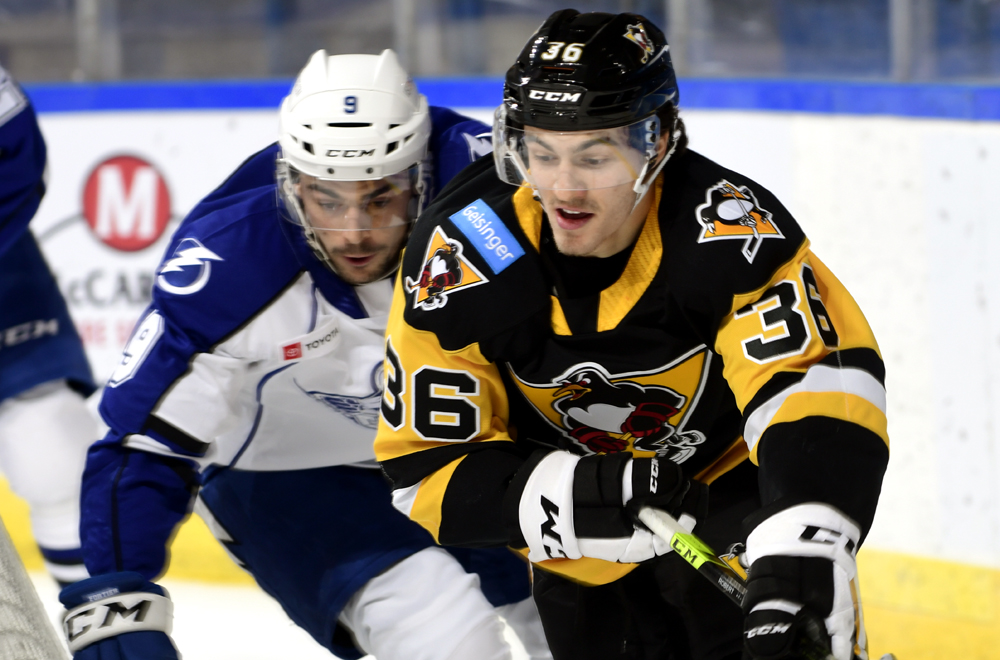 WILKES-BARRE, Pa. – The Wilkes-Barre/Scranton Penguins lost a tight-checking showdown with the Syracuse Crunch, 2-1, in a shootout on Wednesday night at Mohegan Sun Arena at Casey Plaza.

Wilkes-Barre/Scranton (4-2-1-1) saw their three-game win streak come to an end at the hands of a 30-save outing by Syracuse goalie Spencer Martin. The Penguins do, however, pick up a point for the fourth game in a row.

By the end of a quiet first period, the Penguins held the Crunch to just two shots on goal. Martin made a number of difficult stops, namely an early redirection from the slot by Jan Drozg.

The Penguins made good on an early chance in the second period, with Jon Lizotte putting his team on the board first. A pass from the right side wall by Radim Zohorna deflected to Lizotte at the left point, and the defenseman stepped up for a shot that beat Martin through his five-hole 68 seconds into the middle frame.

Wilkes-Barre/Scranton had several more opportunities to extend their lead in the second period, but they were either turned aside by Martin or the two posts that stood behind him. Drozg struck iron on a quick wrist shot following a face-off win, and Jonathan Gruden hit the post on an excellent chance while shorthanded.

Despite combining for more shots in overtime (6-4) than they did in the first period (7-2), neither team could finish things off in the extra frame. Zohorna opened the shootout with a nifty move, but Cam Lee hit the post and Frédérick Gaudreau missed wide while the Crunch converted on both of their attempts.

Max Lagacé performed admirably with 17 saves in regulation and overtime.

Wilkes-Barre/Scranton’s next game is Saturday, Mar. 6, when they travel to Newark, New Jersey to take on the Binghamton Devils. Puck drop between the Penguins and Devils is scheduled for 7:00 p.m. The Penguins’ next home contest is Monday, Mar. 8 at 5:00 p.m. against the Lehigh Valley Phantoms, and the game will be broadcast live on WQMY MyNetworkTV and AT&T SportsNet Pittsburgh in addition to WILKNewsradio.com.