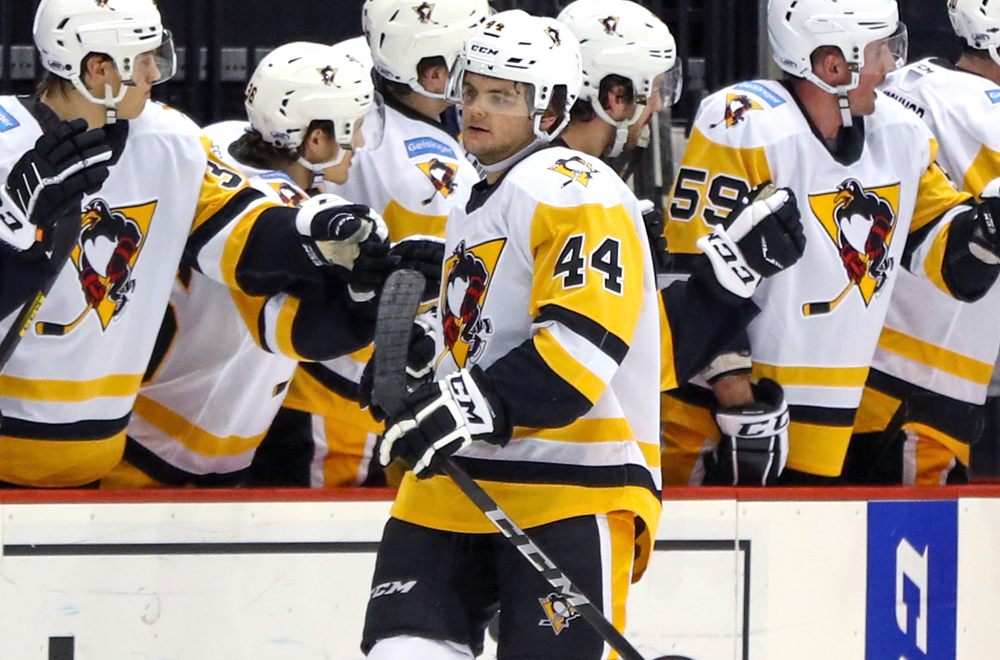 NEWARK, N.J. – The Wilkes-Barre/Scranton Penguins erased a three-goal deficit to come back and beat the Binghamton Devils, 6-3, on Saturday night at RWJBarnabas Health Hockey House.

The Devils used a pair of man-advantage markers in the first period to assume a 2-0 lead. Danick Martel redirected a shot from Ben Street into the Penguins’ net at 7:06, and Street tucked in one for himself less than two minutes later.

Nine seconds after Street’s power-play goal, Graeme Clark took advantage of a gigantic bounce off the active end boards and stuffed the puck past Max Lagacé, making it 3-0.

Wilkes-Barre/Scranton’s comeback was kickstarted by a high-sticking double minor in the first period. Radim Zohorna lasered a shot into the near-side, top corner for one power-play goal at 16:37, followed by Jordy Bellerive scoring on the second half of the double minor 26 seconds later.

The Penguins pulled even, 3-3, when Gruden batted in a rebound during another power play at 7:39 of the second stanza.

Jon Lizotte gave his team its first lead of the night with less than five minutes left in the middle frame. The black and gold didn’t look back from there, as Wilkes-Barre/Scranton held Binghamton to seven total shots in the second and third periods.

Jan Drozg gave the Penguins some breathing room 67 seconds into the third period, and O’Connor tacked on an insurance marker with a cannonading one-timer midway through the final frame of regulation.

Lagacé posted 18 saves while manning the crease for the Penguins. Devils goalie Gilles Senn racked up 37 saves in the loss.

Wilkes-Barre/Scranton’s next game is Monday, Mar. 8 against the Lehigh Valley Phantoms. Puck drop between the Penguins and Phantoms is scheduled for 5:00 p.m. at Mohegan Sun Arena at Casey Plaza, and the game will be broadcast live on WQMY MyNetworkTV and AT&T SportsNet Pittsburgh in addition to WILKNewsradio.com.