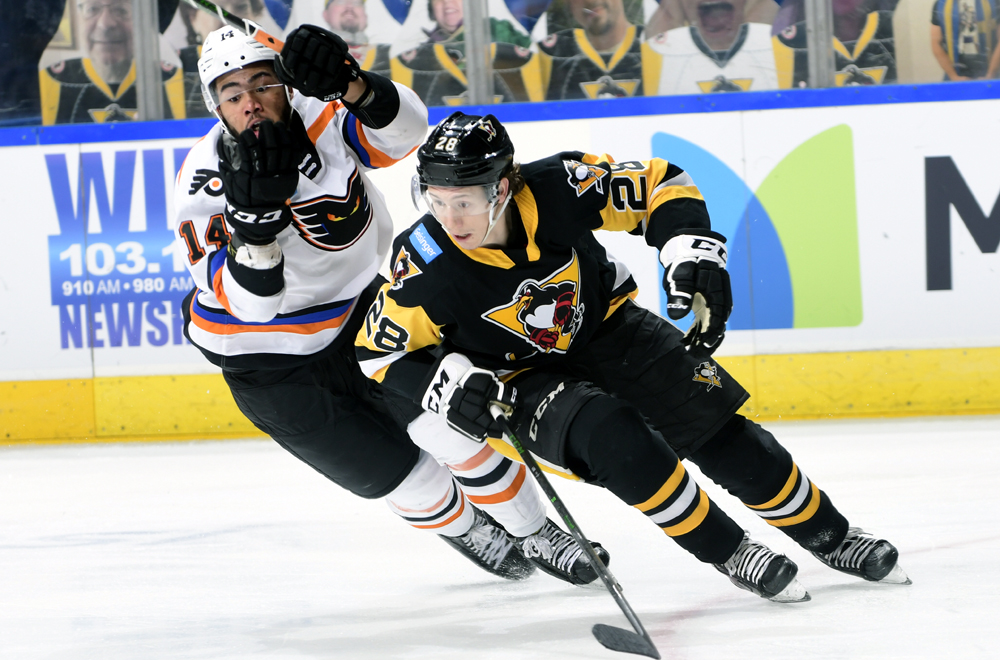 WILKES-BARRE, Pa. – The Wilkes-Barre/Scranton Penguins extended their point streak to six games, but fell in overtime to the Lehigh Valley Phantoms, 4-3, on Monday night at Mohegan Sun Arena at Casey Plaza.

Wilkes-Barre/Scranton (5-2-2-1) battled back from down 2-0 in the second period and back from a late 3-2 deficit to force overtime, thanks to multi-point outings from the team’s top line of Tim Schaller (2G-1A), Josh Currie (1G-1A) and Drew O’Connor (2A).

Lehigh Valley broke through for the first goal of the night 12 minutes into the game. A turnover turned into a three-on-one rush for the Phantoms, finished with a one-timer by Brennan Saulnier.

Garrett Wilson built a 2-0 lead for Lehigh Valley early in the second stanza, but Wilkes-Barre/Scranton responded 62 seconds later. O’Connor’s tenacity created a net-front scramble around Zane McIntyre’s crease, and Schaller got his stick on the puck before it rolled across the goal line.

The Penguins equalized, 2-2, on a delayed penalty at 10:48 of the middle frame. Hard work by O’Connor and Schaller along the boards freed the puck to Currie, who whipped in the tying goal.

Play remained even for most of the third period, until Pascal Laberge batted in a rebound with 6:53 left in frame.

Given a power-play with 5:03 remaining in regulation, the Penguins needed to score against the No. 1 penalty kill unit in the league in order to even the scales again. And that’s exactly what they did. A bid by Currie was fought off by McIntyre, only for Schaller to swoop in and deposit the loose change to the back of the net. Schaller’s second tally of the night arrived at 15:47 of the third period.

Lehigh Valley possessed the puck for most of overtime, eventually leading to the game-winner from Ryan Fitzgerald at 3:18 of the extra session.

Shane Starrett posted 28 saves in net for the Penguins, while McIntyre turned aside 32 shots in the overtime victory.

Wilkes-Barre/Scranton’s next game is Saturday, Mar. 13, when it hits the road to face the Syracuse Crunch. Puck drop between the Penguins and Crunch is scheduled for 7:00 p.m. at Upstate Medical University Arena. The Penguins’ next home game will be a chance at revenge against the Phantoms on Friday, Mar. 19. It will also be Wilkes-Barre/Scranton’s first game of the season with fan attendance. Game time is slated for 7:00 p.m. at Mohegan Sun Arena at Casey Plaza.