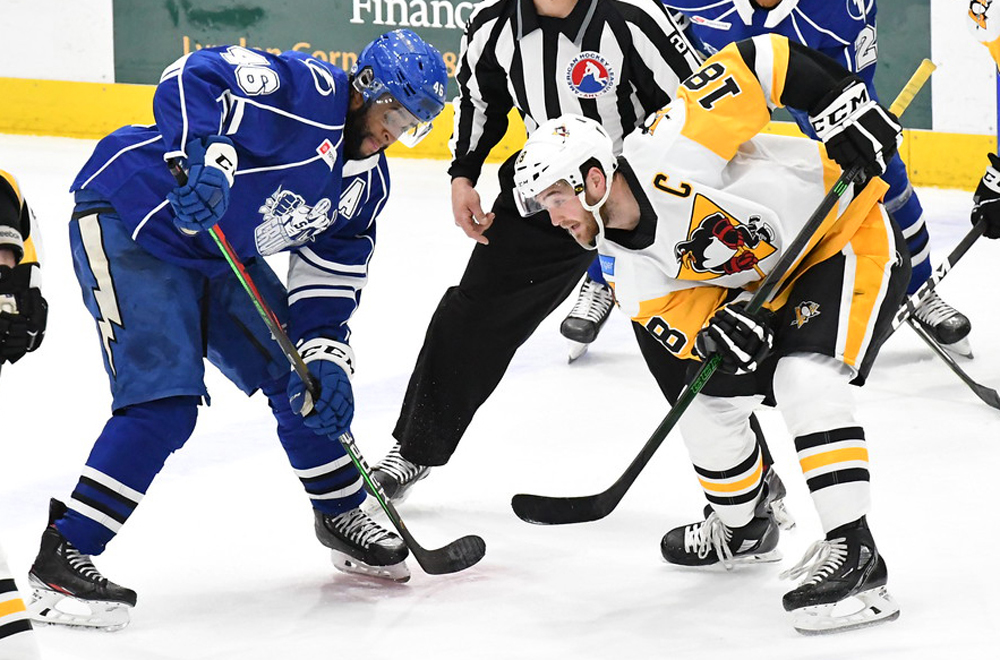 SYRACUSE, N.Y. – The Wilkes-Barre/Scranton Penguins had their six-game point streak halted by the Syracuse Crunch, as the Penguins lost, 3-0, on Saturday night at Upstate Medical University Arena.

Wilkes-Barre/Scranton (5-3-2-1) thrusted 37 shots on goal, only for Samuel Montembeault to turn them all aside. The Penguins were ultimately undone by a mid-game lull during which the Crunch scored all three of their goals.

The Penguins showed some early promise, with Pierre-Olivier Joseph setting up a pair of opportunities for Jan Drozg and Drew O’Connor. However, both bids were sent wide of Montembeault’s net.

Syracuse scored the game’s first goal at 11:30 of the seconds period, a tip-in from the slot by Daniel Walcott. Otto Somppi gathered his own rebound and doubled the Crunch lead at 16:10 of the middle frame. One minute and eight seconds later, Ben Thomas made it 3-0, Crunch.

In a surge of desperation, the Penguins proceeded to pepper Montembeault with 16 shots in the third period, but none found the back of the net. Several of the Penguins’ best chances throughout the game didn’t even register as shots on goal, as they either steered wide or hit the post.

Wilkes-Barre/Scranton’s next game is against the Lehigh Valley Phantoms on Friday, Mar. 19. It will also be Wilkes-Barre/Scranton’s first game of the season with fans in attendance. Limited supply, general admission tickets will go on sale at 10:00 a.m. on Tuesday, Mar. 16 Game time between the Penguins and Phantoms is slated for 7:00 p.m. at Mohegan Sun Arena at Casey Plaza.