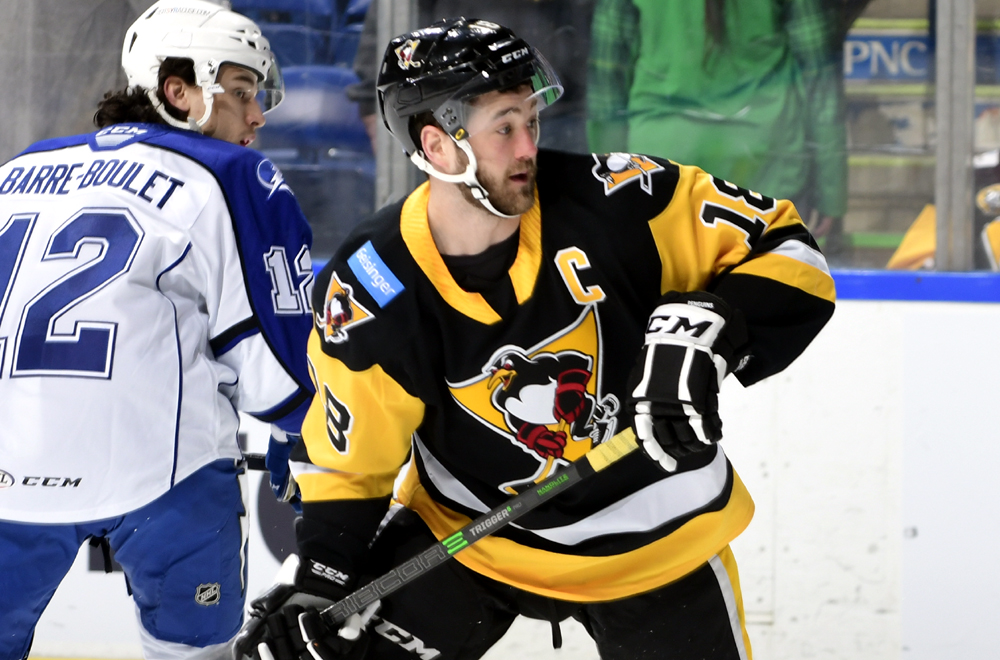 WILKES-BARRE, Pa. – The Wilkes-Barre/Scranton Penguins lost to the Syracuse Crunch, 5-2, on Friday night at Mohegan Sun Arena at Casey Plaza.

Wilkes-Barre/Scranton (5-4-2-1) was delighted to host fans for the first time in over a year, but the Crunch crashed the party by putting the Penguins in a four-goal deficit that proved insurmountable despite their late-game surge.

Syracuse got on the board nine minutes into the first period with Gabriel Fortier burying a chance mere seconds after the expiration of a Wilkes-Barre/Scranton power play. The Crunch extended their lead to 2-0 by once again scoring shortly after a penalty kill as Serron Noel set up Sean Day at 14:38.

Boris Katchouk ballooned the score to 3-0 at 3:30 of the middle frame. Then Day’s second goal of the game arrived 1:11 later and put the Penguins in a 4-0 hole.

Tim Schaller gave Wilkes-Barre/Scranton life at 6:20 of the second period, taking advantage of a turnover in the Crunch zone and labeling his shot perfectly in the far-side corner.

The Penguins cut their deficit down to two when Drew O’Connor tallied during a four-on-three power play in the third period.

Wilkes-Barre/Scranton unloaded 17 shots on goal in the final frame of regulation compared to four shots for Syracuse, but Christopher Gibson made a number of sharp saves to keep some distance between his team and the Penguins. Eventually, Brady Keeper sealed the deal for the Crunch by scoring an empty netter with less than a minute to go.

Gibson broke the hearts of the Penguins fans in attendance with his 39-save performance. Starrett denied all eight shots he faced in relief of Larmi, who left the game after posting eight saves on 12 shots.

Wilkes-Barre/Scranton’s next game is against the Lehigh Valley Phantoms, a 3:05 p.m. Sunday matinée at PPL Center on Mar. 21. The Penguins’ next home game is also against the Syracuse Crunch, Wednesday, Mar. 24. Puck drop between the Penguins and Crunch is slated for 7:00 p.m. at Mohegan Sun Arena at Casey Plaza. Fans can secure their seats for Wednesday’s home game by calling the team’s front office directly at (570) 208-7367.

Fans who wish to renew their season ticket packages with Wilkes-Barre/Scranton or become a new Penguins season ticket holder can also call the team’s front office at (570) 208-7367.